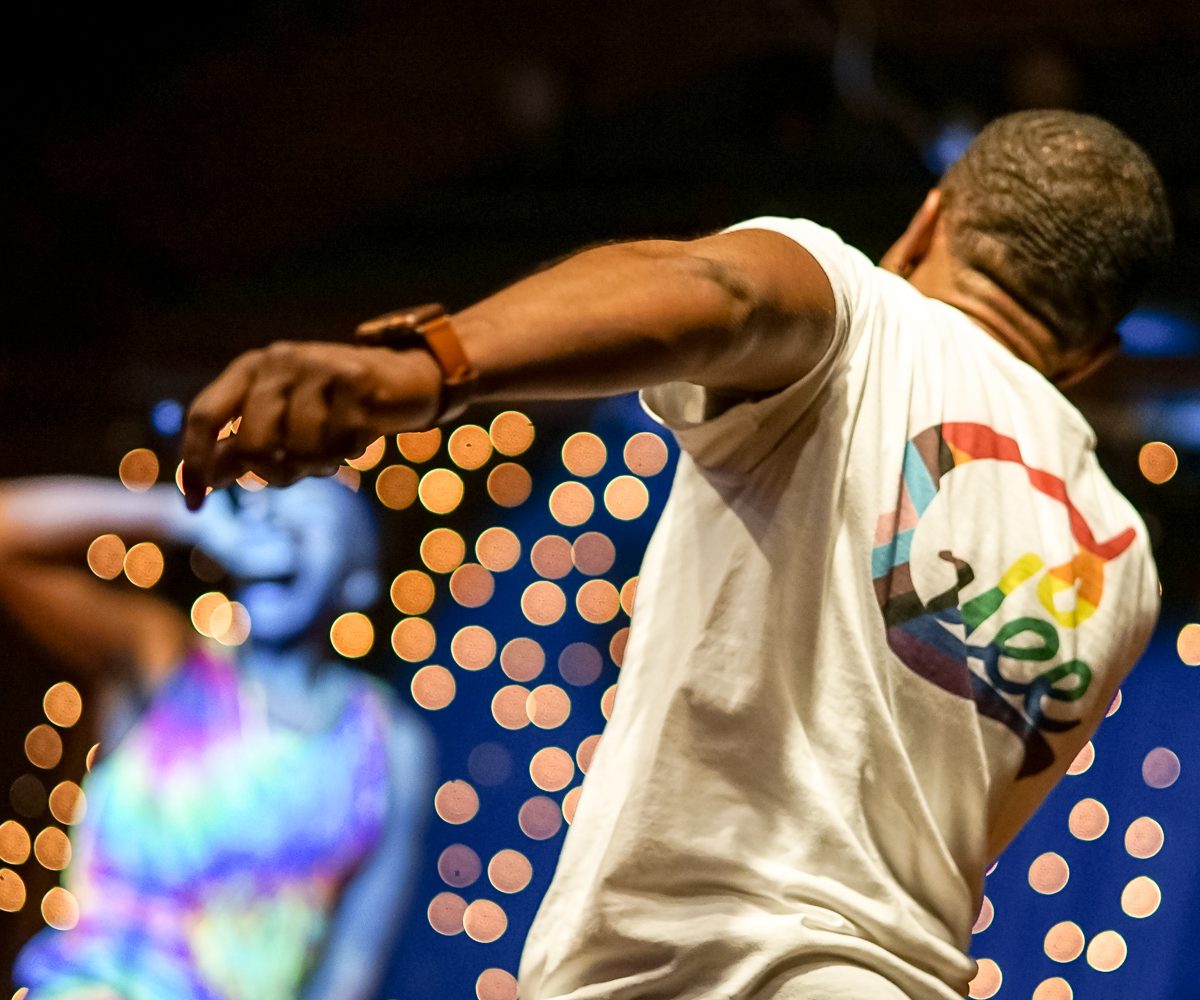 Alright! It’s been a while since we got to construct one of these lists (fuck you, COVID), but we are jazzed as a bluegrass fan at a patio matinee in August to bring you The Top Ten Coolest Things We Saw from locals in the Lawrence Music Scene in 2021. Now, as always, we like to mention that we didn’t get to every show, but we did get to a lot of them (we’re never taking a show for granted again after the pandemic shutdown). Also, this list previously used to say “most badass” instead of “coolest” but we changed the tone to stress how valuable live music is here in Lawrence. We didn’t have time for boring COVID-bedroom projects, this scene needed only the best of the best, and it looks like we got it. So here is, without delay, the coolest shit on the planet that we saw in the local scene this year.

You know, the first thing I like to do in the morning is wake up and have a big bowl of “Fuck ICE.” Earlier this year Arquesta del SolSoul brought big “Fuck ICE” energy to a Replay matinee, and that crowd was not ready. Horns, slam poetry, and Alveolar trills shook that place to its core thanks to the band’s Afro-Latin-percussion-heavy-fusion. Highlights included the audience singalong “Shut those camps down! Fuck ICE! Fuck ICE!” because it is imperative to, and I can’t stress this enough, always FUCK ICE.

By the way, if you feel inclined to donate to the cause, please follow the work of the good folks over at RAICES.

We like to joke that while vaccines may have been required at Kaw River Roots Fest, shoes were optional. That became quite clear at Abe and Jake’s in the dead heat of August when we found ourselves one night dodging sandals flying towards the stage. It appeared that the crowd, in an effort to get down and dance barefoot, began gleefully ditching their footwear all at once.

The night was full of shenanigans (we heard someone drank beer from a cowboy boot? and Tyler Gregory played without his hat you guys), which is to be expected for this kind of thing (we blame those unruly gals in Unfit Wives). Bluegrass likes to go big in Lawrence, and this long-delayed and highly anticipated festival made sure it did. This is post fid-pick but pre-Winfield, and that crowd gets saucy in between their float trips. But the event was also magnificent and beautiful, set on the river and in front of the beauty of the City Hall building.

If Winfield is the earthquake of roots music in Kansas, Kaw River Roots Fest is the warning tremor beforehand. It’s an unforgettable experience we hope to see return in 2022 (if y’all would just fucking mask up and get your vaccines!).

Have you ever seen a room just, like, lose it for a trombone? If you were at the Replay this Summer (and again this winter), you have.

Kadesh Flow is everyone’s favorite anime-inspired rapper, and he needs little more than his trombone and a microphone to get a crowd worked up. Yes, he’s an accomplished jazz musician who dabbles with the likes of Brass and Boujee and one time opened for Janelle Monáe. But the Replay is where he gets to let his full nerd shine. Don’t be surprised if you hear him say lines like “I wrote this while I was watching ‘My Hero Academia.’”

“I write songs about boys. Not about men. I write songs about trash boys” is a hell of an introduction. It’s hard not to become instantly obsessed with Stephonne. The statuesque and sultry performer captivated the Replay earlier this Fall with moves, vocals, and overall sauciness reminiscent of the late great Prince. There was no subject he wasn’t ready to tackle, and he left us all obsessed.

Expect to see more of his antics, thongs, and beautiful songs in 2022.

There is no one doing what Cuee is doing right now. When you look back at everything he accomplished this year, it’s almost hard to believe it happened. In addition to releasing the happiness anthem of 2021 “Ain’t Going Back” (named our #1 best release of the year), he also kicked off the Replay’s first post-pandemic concert, released an entire album, headlined PRIDE, brought in a member of RuPaul’s Drag Race to perform not once, but twice to bring funding and attention to a home for trans youth in Lawrence, and became the face of Lawrence tourism.  He is everywhere because he demanded a space at the table. Cuee brought us unapologetic black and queer joy, and we’re grateful for that in a year of ugliness.

You have to be a real scene kid to appreciate what went down at Bonner Springs in August. No, this wasn’t a Lawrence show, but we’d be absolute fucking morons not to include it.

This wasn’t just another regular moment-in-the-sun for a local band. When Radkey opened for Foo Fighters, it felt like all Lawrence bands were opening for Foo Fighters. This is a band that everyone in Lawrence has rallied behind since they were teenagers (we started covering them well before they were allowed to legally operate a vehicle), and every amount of love Lawrence has poured into Radkey was reciprocated right back at us.

This match-made-in-heaven began when Radkey was featured in Dave Grohl’s documentary “What Drives Us.” The film breaks down the trials and tribulations of touring, but also features two “lesser-known” bands, one being Radkey. Foo Fighters were so taken with the brothers that they ended up bringing them on tour. But on the night of their Kansas City show, both Solomon, Radkey’s drummer, and Foo Fighters’ Pat Smear were celebrating birthdays. It felt like one reason to celebrate after another, and for many folks this was their first touring rock show they saw since the pandemic. To say it was overwhelming was an understatement.

It’s wild to see a band that normally plays the Bottleneck a couple of times every year furiously shred alongside their musical heros at one of the biggest venues in the state… but we’re not surprised. Radkey destroyed and spread their explosive energy throughout the entire venue, so when bassist Isaiah declared “We were born to ROCK!” we didn’t doubt it for one minute.

We like to remind people that there was this one magic moment during the pandemic that fell after vaccines but before Delta, and that’s exactly when PRIDE in Lawrence happened.

We were expecting about 200 people to show up, and instead got more than 2,000 (full disclosure, this is an I Heart Local Music-produced event). There were people who hadn’t hugged a human being outside of their home for two years, and now they were hugging everybody. The joy was flowing in the streets as rich as the rainbow-clad marchers.

The street march, which seemed to run forever due to the large turnout, concluded at Abe and Jake’s, where a party instantly erupted so intensely, we almost felt bad for stopping it to start the show. The evening was rich with thrilling drag performances, queer musicians from the region (The Creepy Jingles and Cuee), and enough high-pitched cheers and squeals to break the sound barrier. The dips, hips, strips, and tips were enough to make our heads spin. The performers gave it their all, while the Kansas River raged outside (making it feel like one big gay cruise ship).

3. Every venue staff member who had to implement COVID safety protocols

As if the pandemic wasn’t fatiguing enough, our local venues had new obstacles to navigate while reopening. In the interest of safety for staff, attendees, and performers, venue staff were assigned the exhaustive task of checking vaccine cards against ID cards (and dealing with the general pig-headedness of anti-vaxxers). We salute you, venue staff. This was a logistical nightmare and y’all handled it like champs. We love and appreciate you. Thanks for keeping us safe.

And fuck you if you don’t tip your bartender.

Earlier this year we wrote about The Replay’s evolution of the return of indoor nighttime rock shows, but we should have more appropriately titled it The Replay’s evolution into madness. Because that’s what it was. We saw bodies just stacked one on top of another, and couldn’t tell anyone apart (remember, this was after vaccines but before Delta). That morning, The Sluts woke up and chose chaos.

A musician friend of ours described 2020 as the “shaking of the champagne bottle” and the return of live music that night as the removal of the cork. Friends, the audience showed up early and it was instantly one-in-one-out. The Sluts played not one, but two rock shows that night (let’s just say they played one sober and the other drunk), while a swampy, crammed audience raged all night. If you weren’t soaked in your sweat, you were soaked in someone else’s. But when The Sluts played “Out of the House,” we all felt it. Hard. And lost control. The crowd screamed “I just want! Out of the house! I just want! Out of the house!” along with the band, and it was a cathartic release to what had been the ultimate year from hell for any live music lover.

Believe us when we say that out of all the local shows in 2021, Horned Wolf’s Halloweekend show was the one we couldn’t stop thinking about.

It was very difficult to choose between this and The Sluts for the #1 spot. But if we’re being honest with ourselves, we all knew that Sluts show was going to be good. However, we walked into Horned Wolf with zero expectations of what their shows would be like with a new frontperson, and were caught completely off guard with how insane the night turned out.

Generally, every Halloween weekend sees metalheads crawling out of the woodwork and howling at the moon (at the Replay). But Horned Wolf’s devotion to the metal scene was one for the books.

With new vocalist Sav leading the way, this was hands down the best local metal show we’d seen in 2021 (and in years, if we’re being transparent). There was a pretty good metal resurgence in Lawrence this year, and this one made the obvious top of the list. It felt like the band did nothing but practice during the entirety of the pandemic. Sav’s powerhouse vocals set the tone right away, conjuring up the packed audience into a frenzy. Between their vocals and the band’s crazy-good guitar riffs, the metalheads were brought to their knees. The crowd headbanged all over that room. I mean, it was like a Cousin It convention. There was hair everywhere.

But from a professional music writer’s stance, it’s important to note what this change in vocalist provided for the band—it proved they were more than just the attraction of their previous and extravagant frontperson. Horned Wolf truly is a metalhead’s band, and their sound was as crisp as an ice pick. The setlist was stacked so that every song grew more intense than the previous one, constructing a narrative you don’t quite get from the average local show. They also brought, dare we say it, a sort of positivity to the metal scene that we hadn’t seen before. Horned Wolf were by far our favorite surprise of the year, and believe us when we say it was well-deserved.

a band that, like, only appears on Friday the 13th??

Top Tracks of the Year from Lawrence Musicians

Tributes, parties, and a whole lot of rock and roll come to the Lawrence music scene in January