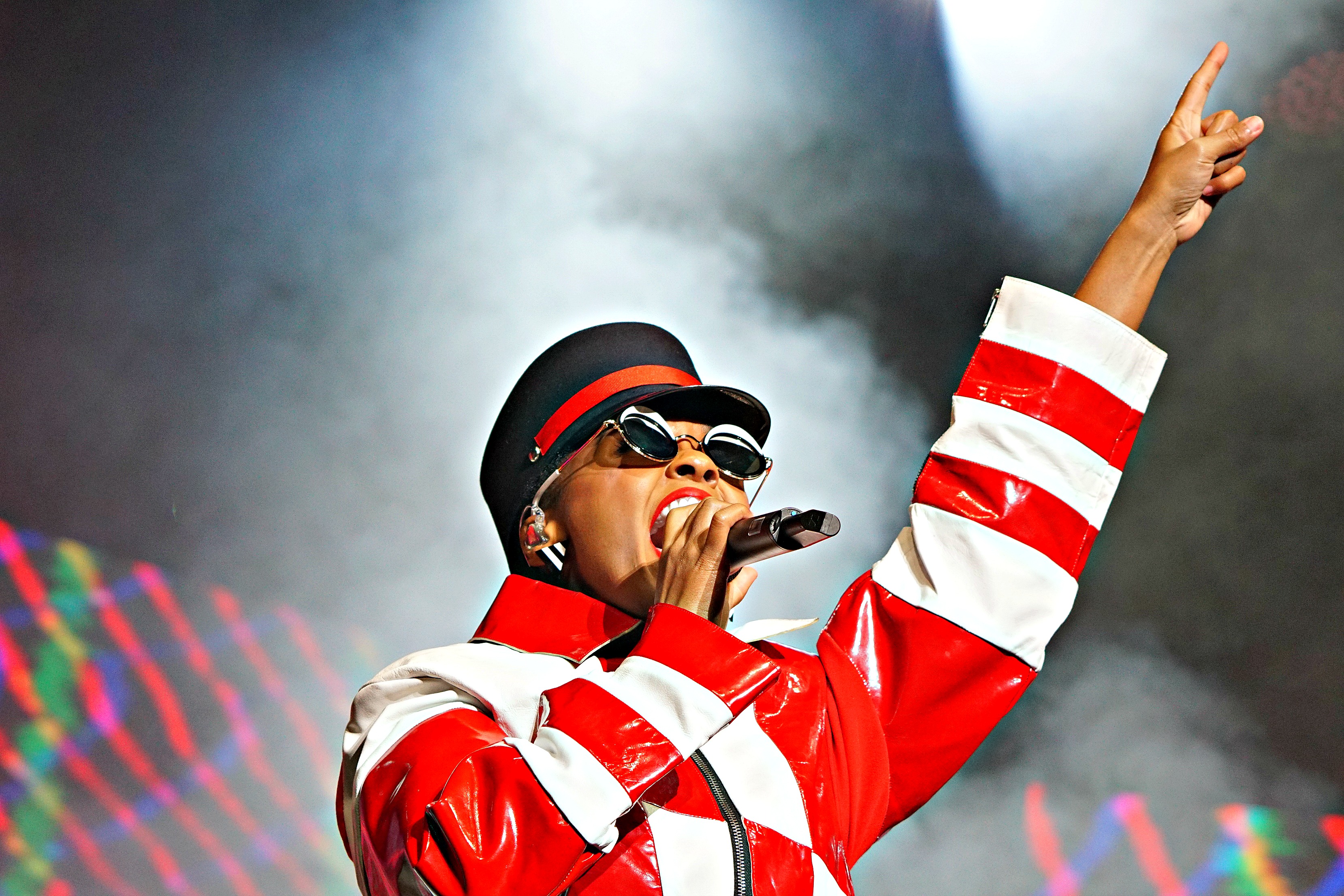 Imagine such a feeling of freedom in your life that you can stand in front of thousands of members of your community and proudly display every facet and detail of your sexuality. That’s where Kansas City native Janelle Monáe’s journey landed her this weekend when she headlined the Open Spaces festival at the Starlight. On Saturday, the musical superstar stood upon an ivory tower on stage and bore it all in front of the community that made her the performance genius she is today.

The set started with her (rightly) taking her place on a throne set atop the tower (staircase) while she spat out rhymes for empowering rap ballad “Django Jane” (a song with a hat tip to Kansas City and a killer music video to boot). Donning a bold, checkered pattern of red, white, and black on her bodysuit (and hat to match), the Electric Lady delivered one explosive performance after another for her Dirty Computers. Accompanied by a squad of (often pantsless) dancers with seductive moves and throbbing thighs, the R&B singer was the very embodiment of sexuality. It was only this Spring, after all, when she came out as pansexual in a highly-coveted Rolling Stone interview that followed her into her old stomping grounds in KCK.

On this night, it was all on the table as she performed songs off the recently released Dirty Computer and 2013’s The Electric Lady. Every song was a statement on sexuality and reason to celebrate it. Monáe, no longer candid about these desires, goes above and beyond by using her position to help make the path smoother for others exploring their identities. “No matter who you love, or how you love, you are welcome at my show,” she proclaimed right after shouting “Happy Pride!”

But it was “Pynk” where she replicated the highly suggestive visuals in the music video that had everyone blushing (or blushing as much as a bold set of Janelle Monáe fans can). Sporting her famous vagina pants, the entire performance wasn’t so much suggestive as it was declarative. This was a time for self-love! Yes, that self-love! And more! Self-love and self-care were the themes of the night. In fact, they’re the themes of the year. Yes, this is a time for self-care on a personal level, like celebrating one’s body and the way a person chooses to love. But it’s also a time for self-care on a grander level, like making sure the world is a safe place for everyone to experience the freedom to love. Monáe was quick to endorse the Democratic politicians in Kansas, including queer Native candidate Sharice Davids (btw, here’s more info on Davids’ campaign). “As women, we have the power and agency to make our own decisions,” Monáe told the audience before the endorsement.

There is one particular point we’d like to make about the Electric Lady’s path to this point. We mentioned this five years ago when she slayed at the Uptown— of all the popular artists we’ve ever covered, Janelle Monáe is perhaps the only one who has never fallen victim to nostalgia. You won’t see her reaching for covers of decades-old songs just to please the masses. But you will see her acknowledging and honoring those who made her present possible, while at the same time painting the future of music with her own unique approach to the craft. We saw just a hint of Janet Jackson’s “Rhythm Nation” in her dance moves for “Make Me Feel.” Naturally, Prince references were all over her music (as he has worked with her in the past and gave his blessing to Dirty Computer long before its release). For one moment in the night, she checked herself in a mirror held by one of her dancers– this was a nod to Morris Day, who checked his own reflection in Jerome’s mirror in that exact same spot when he played the Starlight two years ago. The dance off she held onstage with four members of the audience (including her old music teacher!) during “I Got the Juice” is reminiscent of the late Sharon Jones’ epic dance-offs with fans at her live shows. Then, of course, there’s all that moonwalking she did all over the stage in a gesture towards the King of Pop himself, Michael Jackson. All these references to the greats were just little whispers linking the past to the present, shaping what we’ve come to love from Monáe.

But it’s Kansas City that had the greatest influence of all on our fearless leader. “This place, Kansas City, has taught me so much about myself,” she confided in the audience. “I want anyone out there who has dreams and aspirations to know that great things can come from this place.” She was met with nothing but love and adoration from the squealing audience. This was the community that raised her. Everyone from her 92 year-old Great Grandmother to her cane-wielding music teacher was there… and Monáe took all the love they put into her and sent it right back out into that performance. It was one of those monumental events that you just know becomes an important placeholder in Kansas City’s rich musical history, and it was marked joyously and triumphantly by Monáe’s sexual awakening. Maybe for one young music lover in the audience, this was the show that became their sexual awakening, too.

The Roots got Kansas City moving and shaking at Open Spaces