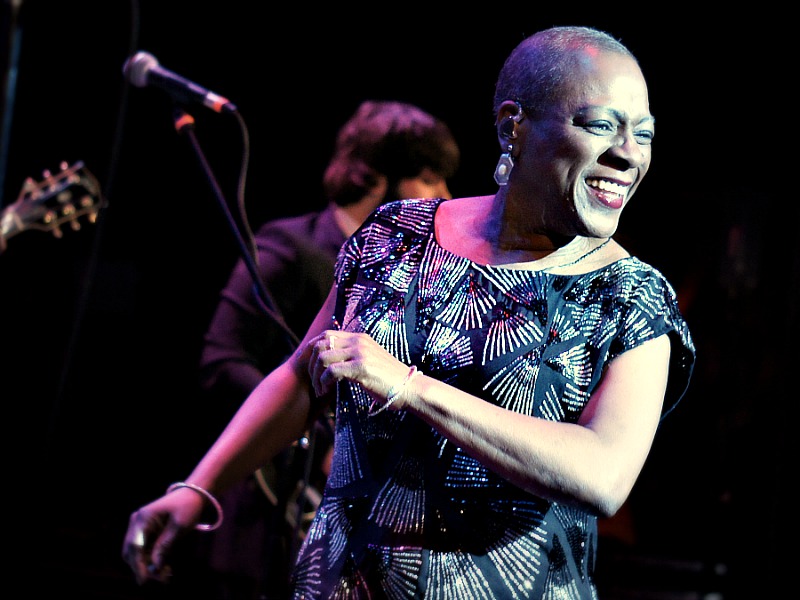 Some of the best shows are the ones where there’s barely any room to move, but everyone can’t help but erupt in dance. Such was the case on Saturday when the legendary Sharon Jones graced the stage of Liberty Hall and delivered a party of epic proportions. 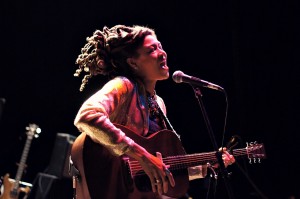 Although the evening would eventually become an over-the-top affair to remember, it began quietly with the enchanting Valerie June. The Tennessee-toned musician is the strong, silent type. She self-released three albums and gained notoriety across the nation for her toe-tapping jams. But onstage, she’s quiet, bashful, and just so lovable. She quietly walked up to the mic and began her set, calming the crowd in just a single breath. By just batting her eyelashes. she brought this overflowing crowd to their knees. We even heard several fans aggressively shushing their neighbors, demanding respect for the artist onstage. At one point, someone yelled “I love you Valerie June!” She responded by bashfully looking at the ground and whispering “That’s nice,” and pausing before continuing “I love to be loved.”

It didn’t take long for her catchier songs to invoke the crowd. Whoops and hollers popped up from every corner of the venue. A master of spontaneity, June made one of her songs a catchy clap-along when technical difficulties arose and her guitar went out. She had the audience wrapped around her little finger while the rest of her digits danced and trotted up and down the frets of her guitar. She waved her hand gracefully in the air after some strokes, as if to throw us under some sort of majestic spell. For the final song, the band left the stage and she ended the journey the same way she began it… alone with the audience. 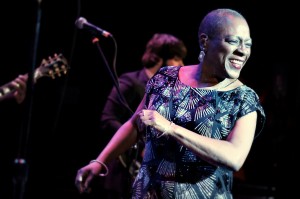 The only act strong enough to follow up an artist so lovingly adored is the storied, the fabulous, and the enigmatic Sharon Jones.

The set began with one heck of a warmup from the Dap-Kings. They made sure the audience was good and worked up before Jones arrived in a captivating and sparkling dress. From the very moment she appeared, the audience could not stop dancing.

This is a woman who started her musical career decades ago, but is only now attaining the type of status that easily fills Liberty Hall to capacity. One barely had room to reach into their pockets, yet everyone somehow managed to conjure up all the dance moves they know. It’s the only reward the audience knew how to give for such an inspiring performer. Just last year, Jones underwent intense and aggressive cancer treatment. It didn’t keep her down for long, though. She immediately hit the road for a string of tour dates, and landed in Lawrence just in time to welcome Spring with the rest of us.

One of the highlights of a Sharon Jones performance is when she invites the audience onstage with her. On this night, she managed to pluck out some incredible dancers from the excitable crowd. That included one of the singers from Hearts of Darkness (the audience was actually full of local musicians from the area). The Hearts of Darkness star definitely stole the show when she busted out her moves, and it threw the sold-out venue into a frenzy. The entire magical moment was caught on video (below), the crowd goes nuts at 4:57 in:

Throughout Liberty Hall, it was easily noticeable that only the most positive types of fans gathered for this event. There wasn’t a single frown or bad mood present, and special bonds were made amongst the fans that night. When Sharon Jones oozes positivity, that love gets put right back into her in the form of a spectacular soiree. Perhaps that’s why she took a moment in the evening to insist that while some fans found her inspirational, she actually felt the same about them. It’s no wonder she couldn’t be kept down for long. Sharon Jones is truly unstoppable.