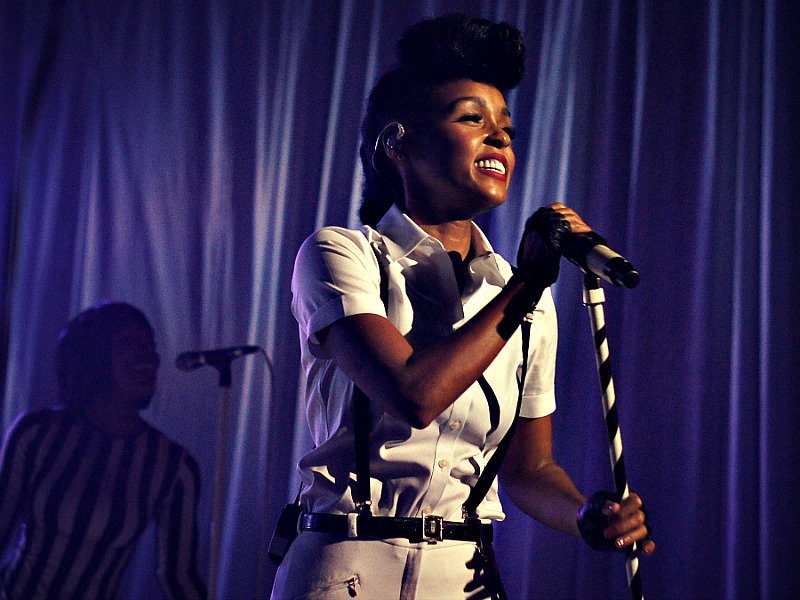 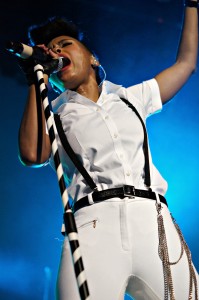 The Janelle Monáe show at the Uptown may have been concert of the year. The Kansas City native was radiant, a shining star casting an emotionally powerful glow over the city. She lit up the stage for an exquisite and memorable show no one will forget.

The Uptown was a sea of suspenders as fans paid homage to Monáe’s unique style. The stage was vibrant, nearly completely cast in white for an uber clean and slick look. White curtains draped the sides, mic stands were wrapped in white tape, and everyone on the stage was wearing variations of white and black clothing. But what stood out the most was the sheer amount of young women dressed in white button-up shirts and black suspenders (there were some men dressed this way as well). The girls ranged in age from toddler to teenager, and they all mastered the art of Monáe’s elegant hair bun. We saw friends, sisters, mothers and daughters all donning the duds in solidarity. The Monáe fashion army was truly out in full force. 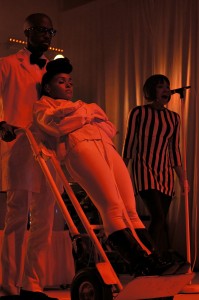 After a soulful performance from Roman GianArthur (who had more hip thrusts than Elvis and guitar riffs like Prince), three men appeared onstage to set up for Monáe’s set. They can only be described as mad scientists. They appeared in white lab coats and bow ties, and meticulously (as well as dramatically) set up mic stands and the like in a very uniform fashion. These same men would later use some sort of dolly to roll out Monáe onto the stage wrapped in a straight jacket. Then, as soon as the music kicked in, she ripped off the jacket and the “scientists” released her to the audience. The Electric Lady immediately dived into hits from her latest album with a full backup band in town. She had some lively backup singers, though they were hardly needed considering every person in the sold out venue sang every word to every song at the top of their lungs. After a few songs, the “mad scientists” tried to come back at her with the straight jacket, but Monáe (who has a flair for the dramatic) beat them off with one of her fancy black and white sticks. 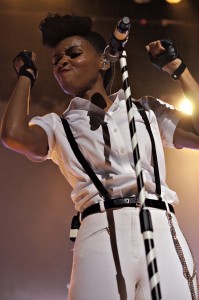 Monáe paid tribute in many manners during her show. She paid tribute to Kansas City, where her talent was born. She paid tribute to her family, namely the women in her family. “Tonight, we celebrate!” she exclaimed. “I celebrate my momma, my auntie… tonight I celebrate all the women!” But the greatest tribute was paid to entertainers before her. She delivered dance moves made famous by James Brown and Michael Jackson, and even showed off her impeccable moonwalking maneuvers. Between the Jackson Five covers and all the iconic dance moves, the Electric Lady’s set was filled with major props to Michael Jackson. But those tributes (as perfectly performed as they were) can be laid to rest, considering Monáe is now becoming a legend on her own.

Kansas City has every reason in the world to be beaming with pride right now. Monáe’s adventurous spirit has spotlighted the community in a positive light, and her glorious talent radiated straight out of the stage and into the heart of every fan at the Uptown. On Friday night, the Electric Lady truly was the shining star of Kansas City.