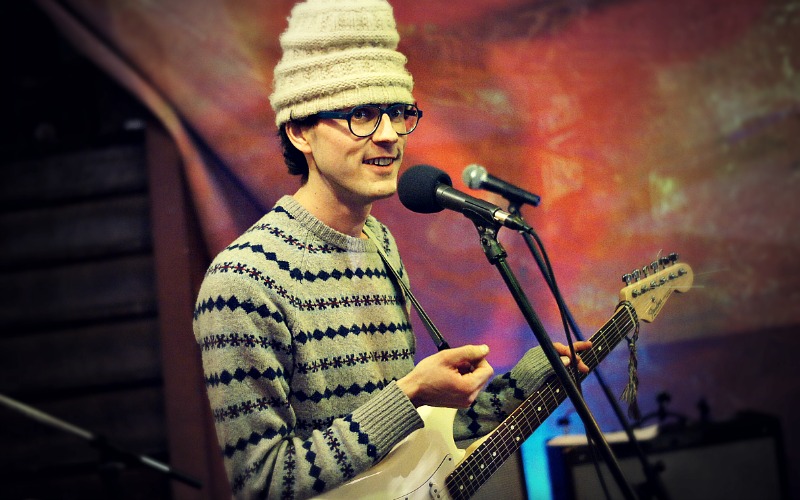 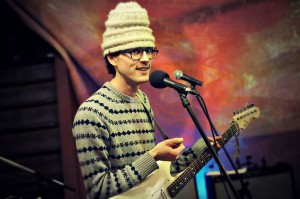 While Lawrencians spent Valentine’s Day doting on each other, a very affectionate atmosphere was brewing at Love Garden. Oils, the sole band performing that night lovingly gave their fans a very unique show and a concert to remember on Saturday.

The main man behind the band is Andrew Frederick, and he began the show by reverting back to his old mannerisms and performing as a two-piece. Under the watchful gaze of his drummer (and close confidant), he pulled a lot of “Classic Andrew” maneuvers, such as backing up into a few awkward onlookers while he played, ditching the guitar and just singing into the mic while rapidly pacing about, and throwing out a few clever remarks. Between songs, Andrew’s dialogue left the audience half perplexed, half in awe. “Sometimes, love is scary,” he’d proclaim before gazing right into their eyeballs for a few solid seconds. 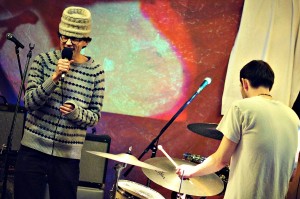 The thing about Andrew and drummer Mark Osman is, those two could noodle around for hours. They’re completely unpredictable, which works well with their earlier works as an experimental-transitioning-to-psychedelic band.

But their noodling came to a half for an intermission, after which they were joined by an ever-growing posse of musicians. Much like a drop of oil can expand and change shape, so did the band. Oils took on many forms during its time. Sometimes there were two members. Sometimes there were seven or more. At one point last Summer, the band really just kept getting so big there wasn’t enough room for everyone on the Replay stage. 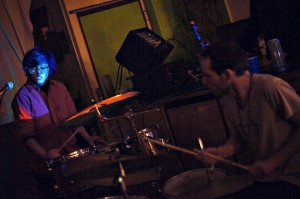 So for the second portion of the program, a series of friends jumped behind various instruments. This is where we got to watch a live-rendition of the band taking shape over the years right before our very eyes.

CS Luxem, perhaps one of Andrew’s most trusted musicians in his circle, stood behind him and backed him up with looping vocals and keys. Taryn Blake Miller, of Your Friend, knocked it out on bass then eventually on percussion. Up next was Bobby Sauder, of Karma Vision. Then No Cave’s Ross Williams and Wandering Lake’s Brian Kupillas (the latest addition to this collective), joined the party. 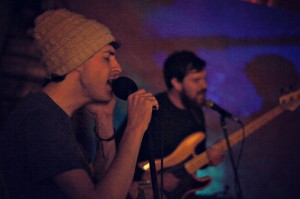 The numbers they knocked out as a larger group were industrious and lively, blowing through several vigorous layers of sound. While the two-piece allowed enough intimacy to bond with the audience, the larger group ignited them into a ball of fire.

I like to imagine the show ended just how Andrew wanted it, surrounded by all his friends. If you were a musician who appreciated Andrew’s ingenuity at some point in the last couple of years, chances are you got to join him onstage. The rest of us weren’t left empty-handed, though. We were awarded a clever and unapologetic performance in its purest form. It’s nice to know that, in this town, if you love a band, there’s a good chance they’ll love you back and put just as much into the relationship as you did.