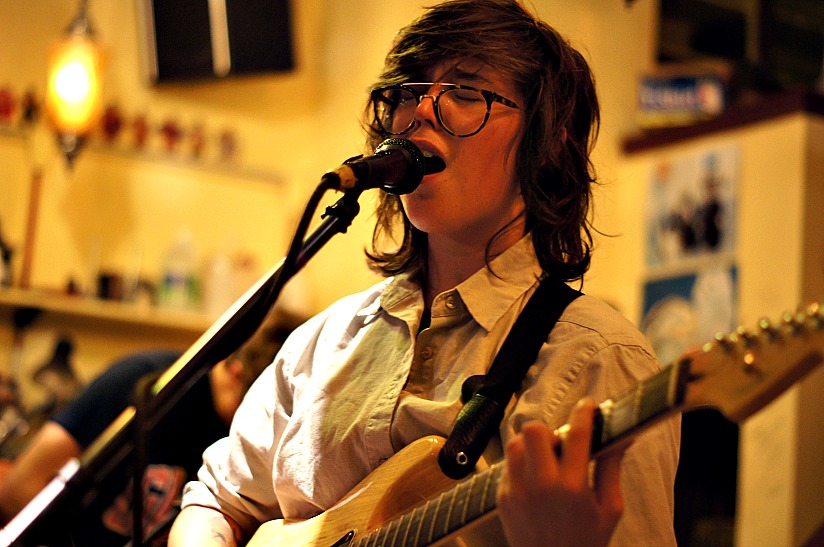 Facebook0Tweet0LinkedIn0Pin0
In the fall of 2012, Taryn Blake Miller took a chance and decided to venture out on her own musical project for a change. Less than two years later, her dream has come true. Your Friend, also known as Lawrence’s indie darling, is now part of the Domino Records family.

The announcement came down Thursday morning, but has left much of Taryn’s fan base on the edge of their seats (there are no secrets in this town). Now, it’s official. Domino will put out her record, and she’ll then head out on a string of tours. Out of all the possibilities that come with an opportunity like this, playing across the U.S. is what gets Taryn excited the most. “No one sees dollar signs when this happens, it’s about something else. It’s the chance to put my music in front of other people,” she confided in I Heart Local Music. “I’m going to learn to love making records at some point, I keep telling myself that. But I love to play live shows. I’m excited to go out, cover new territory, see what’s out there. It’ll change my music tremendously.”

Although Taryn is looking forward to growing on the road, she won’t stray too far from home. She won’t be able to say she left her heart in Lawrence, because she plans on continuing her work here with local music. “I would not be in the position I am without this town,” she admitted. “I am very happy to wake up and go to sleep in this town. There’s always a good show. There’s so much creative life here.”

A lot of that creative life resides at SeedCo, a popular DIY space in Lawrence that houses many of Lawrence’s talented artists and musicians. Taryn knows this, and hopes to draw some attention back there. “They played a huge role in where I’m at now,” she says. Taryn will still be putting out a tape on local label Whatever Forever, with some involvement from 808 New York. “It’s cool to say I’m from Kansas. I’m proud to be from here, and to have that be a public thing. There’s so much happening here that I don’t think people know about.”

From here on out, Taryn heads to SXSW for a few showcases, and then the physical copy of her record comes out in April (just two days before her birthday). An earlier version was released last August. Taryn says she can’t believe this exciting opportunity is in her hands right now, but she can’t see any reason to leave Lawrence behind. “I never hear anything bad about Lawrence. It’s something to be fond of,” she says. “It was kind of a whirlwind, that’s the way everything’s always worked out for me. I just kind of ride the waves.”

Pay attention to the *music video below. It was released to commemorate the announcement, and was shot in and around Lawrence. Keep an eye out for familiar Lawrence landmarks and stages.

Bonus video: Here’s the first video we ever recorded of Taryn. Notice her bandaged hand. She suffered an injury just before the shoot, and soldiered through the performance anyway.