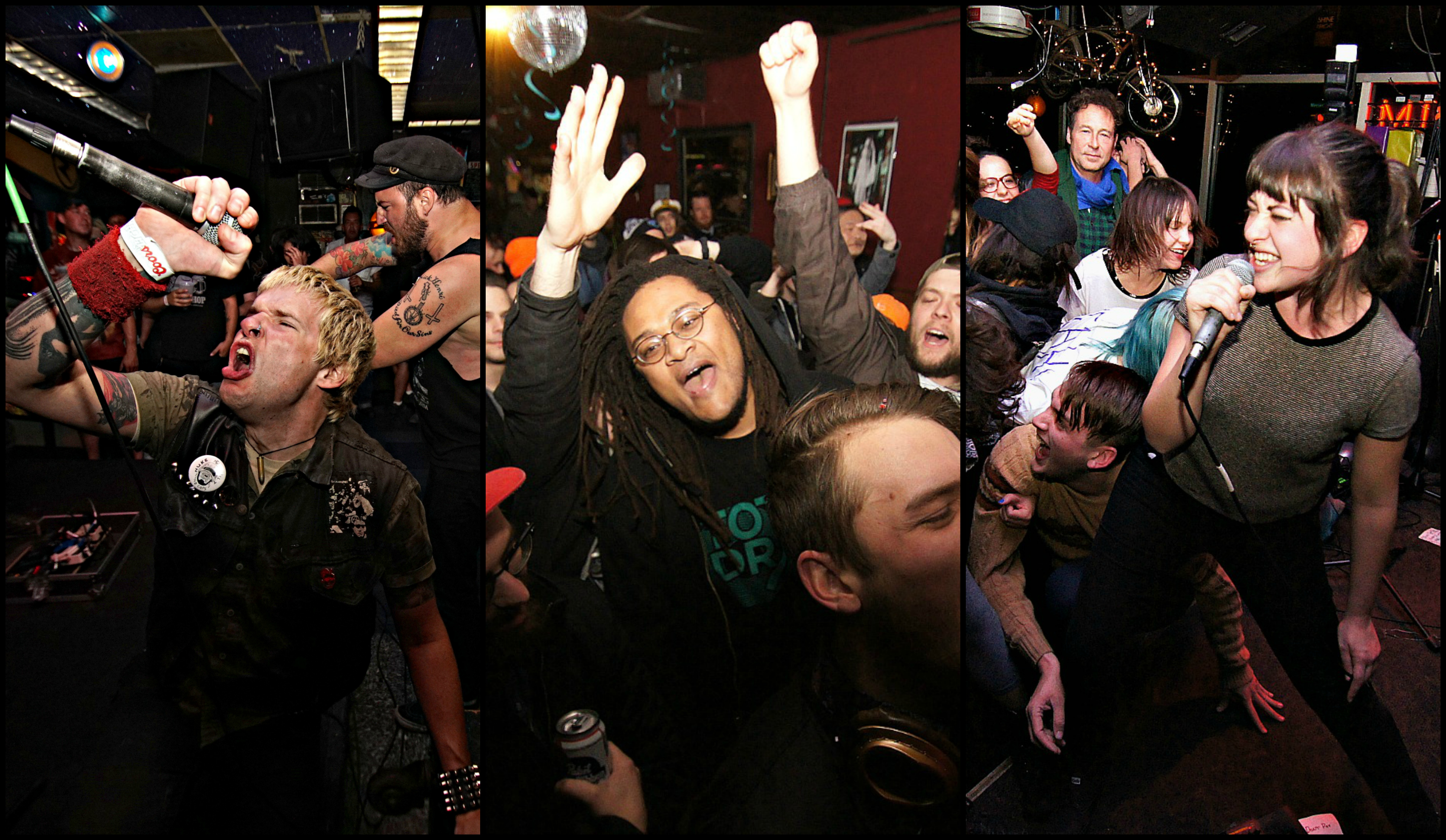 Earlier this week, we brought you the Top 10 most badass things we saw from touring bands this year. Now it’s time to pay our dues to the more important list: the locals. We saw anywhere between two to five shows per week (sometimes more), but that was never enough. Lawrence truly was the place to be for live music, and will continue to be the place to experience live shows. Here are some of the most badass moments we saw from the locals in 2016:

Right as everyone was wanting to start 2016 on the right foot, the unthinkable happened— we lost an icon. David Bowie was an immense influence on many of the locals here, so they gathered to honor his music, life, spirit, and art. Several musicians, including Chris Luxem and Your Friend’s Taryn Blake Miller, performed his songs in his image, but it was Katlyn Conroy who brought the house down. Only Conroy is capable of hitting such an impressive range of notes, and she threw herself fully into the performance (and the costume).

We see a lot of familiar faces in the music scene, but none are as out-of-their-mind excited as Garrett Marsh.

You’ll normally recognize him as the angel-voiced crooner fronting Real Adults (everybody loves Real Adults). But when he’s not gently singing to you from the stage, he’s thrashing off the stage.

Seriously, this guy is in just about every rowdy crowd photo we’ve taken at local shows this year. You really can’t miss this guy, he stands well over six feet tall– and believe us when we say this guy crowd surfs every chance he gets (for both local and touring acts). He’s always front and center, supporting the local shows, screaming his head off, and flailing about. Mazel Tov, Garrett. You’re a true Lawrence music fan (always going to see bands that span several genres) and a real peach. Party on, Wayne.

Speaking of places where Garrett Marsh loses his shit… Nothing gets on our good side like a band that goes beyond their duties as entertainers to make a night special, and Psychic Heat accomplished that at their album release show. Every square inch of that show was saturated in surprises. There was a “drum off” between Psychic Heat’s drummer and the original madman himself, This Is My Condition’s Craig Comstock. The formerly disbanded Paper Buffalo came together for a reunion. Psychic Heat performed in a nonstop sea of psychedelic fog. Even the devil showed up at one point.

When they first started playing years ago as a young band, they would dog pile each other at the end of the set. They’ve since graduated to slamming themselves on their knees, flailing their long hair about wildly, while tearing through wailing guitar solos. The show allowed the album to arrive in style, and it was absolute magic.

Ebony Tusks is an act that could have filled out every spot on this list. The hip-hop trio don’t just give you a show, they give you an experience. But it was their set at our “SXSW Bound” fundraiser that really took the cake. It began with an entire crowd chanting the name of the frontman, yelling “Marty is my best friend!” over and over again (a statement more true to the scene than anyone realizes).

The group then got the audience to pound on their chests in rhythm with the song in a manner reminiscent of a similar scene in “The Wolf of Wall Street.” Every Ebony Tusks set is a religious experience. Marty Hillard rarely stays limited to the stage, jumping in with the fans and performing amongst his peers. It’s an emotional and real experience that leaves you with something to hold onto, but also leaves you with something to chew on as well.


6. Wendy Moira emerges into the scene

Technically, Wendy Moira emerged in the last few weeks of 2015, but it wasn’t until early 2016 that their shows got downright psychotic. It takes all but a few seconds for this femme-fury-fueled act to get their fans worked up. The trio is one of the most unapologetically punk as fuck bands in the region, and certainly one of the more feral acts in Lawrence. 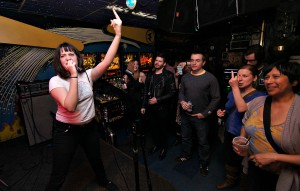 Wendy Moira were likely raised by a family of possums outside the Church of Malt Liquor, nursed on cheap beer until they were ready to hunt and feast on the decaying songs of rockers past.

Their onstage (and offstage) antics are always in the forefront, with screeching guitars and squealing vocals that work the audience into a frenzy. But half the fun of a Wendy Moira set is watching all the little punks exert their anger alongside the vocalist, who always embeds herself in the crowd during the performance.

When we threw our showcase at Middle of the Map Fest, it was in front of a lunchtime crowd full of elderly folk eating at The Brick early in the afternoon. That’s when The People’s Punk Band took to the stage dressed like members of the Republican party, ready to delve into a series of political tirades. Oddly enough, the set went over really well with the elderly. The point is, it’s no secret where the band’s politics lie. This was especially true in August when the band began their Replay set by entering the venue from the back with Trump’s head on a stake.

The audience had a heyday. They kicked it, flipped it off, a couple of people even kissed it… but almost all of them wanted to fight it (show us on the doll where he hurt you, America). As promised, the band got excessively rowdy with brawl-worthy tunes while the audience (eventually) tore the Trump head apart.

OK, so we all know by now that Stiff Middle Fingers’ frontman storms the streets outside the venue they’re playing at every show (they even made a music video about it). But it was their Field Day Fest rampage that will remain forever etched in our memories.

The “punk for everyone” attitude stretched into the festival when they decided to make one of the rowdier showcases all ages. This meant it was held while the sun was still up. The evening was capped with Stiff Middle Fingers’ signature rowdy set, with the frontman scaling all parts of the venue in little more than a pair of booty shorts. But what a site it was to see them storm the streets with a hoard of punks, screaming at the top of their lungs while families waltzed down the sidewalk (ice cream in hand) for what they thought would be a leisurely summer evening. 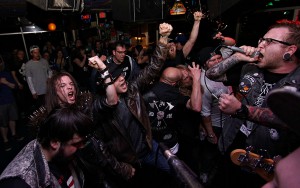 3. Young Bull’s Most Metal Night Ever

If you were at the Replay on the second weekend of April, chances are you were absolutely wrecked after the Saturday show. Gomorrah, out of Colorado, showed up with spikes up to here and destroyed what was left of the venue after Young Bull’s set. That set, by the way, was legendary. At this point, Young Bull is still a fairly new band. There are a lot of musicians who wish they could live up to the boisterous energy of 80’s hair metal bands, but only one local band actually pulls it off.


2. Agent’s Seven Minutes in Heaven at the Replay

We honestly thought they were joking around when they said “We’re only gonna play for seven minutes.” The scruffy punk rockers in Agent kept repeating this right before they played. “I hope you don’t have anywhere to go for the next seven minutes,” they announced before hammering the point home one more time. “Hi, we’re Agent and we’re going to play for seven minutes.”
But on a hot, sticky weekend over the Summer, Agent played for seven minutes— and you better believe every damn second of it was priceless.

From the very moment they started playing, bodies started flying across the very-packed Replay. This was hands down the most hardcore set we had ever seen at the rowdy venue— and if you blinked, you would have missed it. But if you paid attention, you thrashed and got your ass kicked. It looked like “Fight Club” in there… if this was your first night, you had to get your teeth kicked in. They even kicked one of their biggest fans square in the chest, sending the crust punk flying towards the back, Van Damme style. And when they were done beating up the audience, they beat up the venue. The vocalist smashed his mic stand into the ceiling, letting it dangle there while he screamed and growled the rest of the set into it. This was, perhaps, the largest amount of concentrated chaos to ever appear in one setting, and the punk rockers were in heaven.

Lawrence Field Day Fest was so monumental, so epic, and so OUTSTANDING this year that it could have taken up every spot on this list. But we reserved it for two spots (earlier we mentioned Stiff Middle Fingers’ Field Day Fest set). Everything about the festival was fantastic, and every band that touched the stages in Lawrence were at the top of their game. But believe us when we tell you, Bummer shut it down.
In what had to be the culmination of the weekend of excitement, Bummer proved once again to be the most disorderly bunch of the lot. Our ears were ringing for days after that set. The band abandoned the stage and set up on the floor of the Jackpot in order to fully embrace their turbulent volume. What followed was the most raucous set to ever grace Field Day Fest in its five-year history. The crowd was a little timid at first, but eventually dove head-first into headbanging heaven. Bummer, who we are now certain were raised by wolves, encouraged every lawless act with a soundtrack to match.

Everybody needs a good Bummer set in their lives, a moment where you can truly riot and connect with your inner ruffian. Their set encompassed the very essence of a festival like this… a moment where all the bands are in between tours and can absolutely let loose, and a place where we can tell 2016 to go to hell. This is the point where Bummer collided with Field Day Fest and provided just that, and exactly why they earned the top spot on this list.