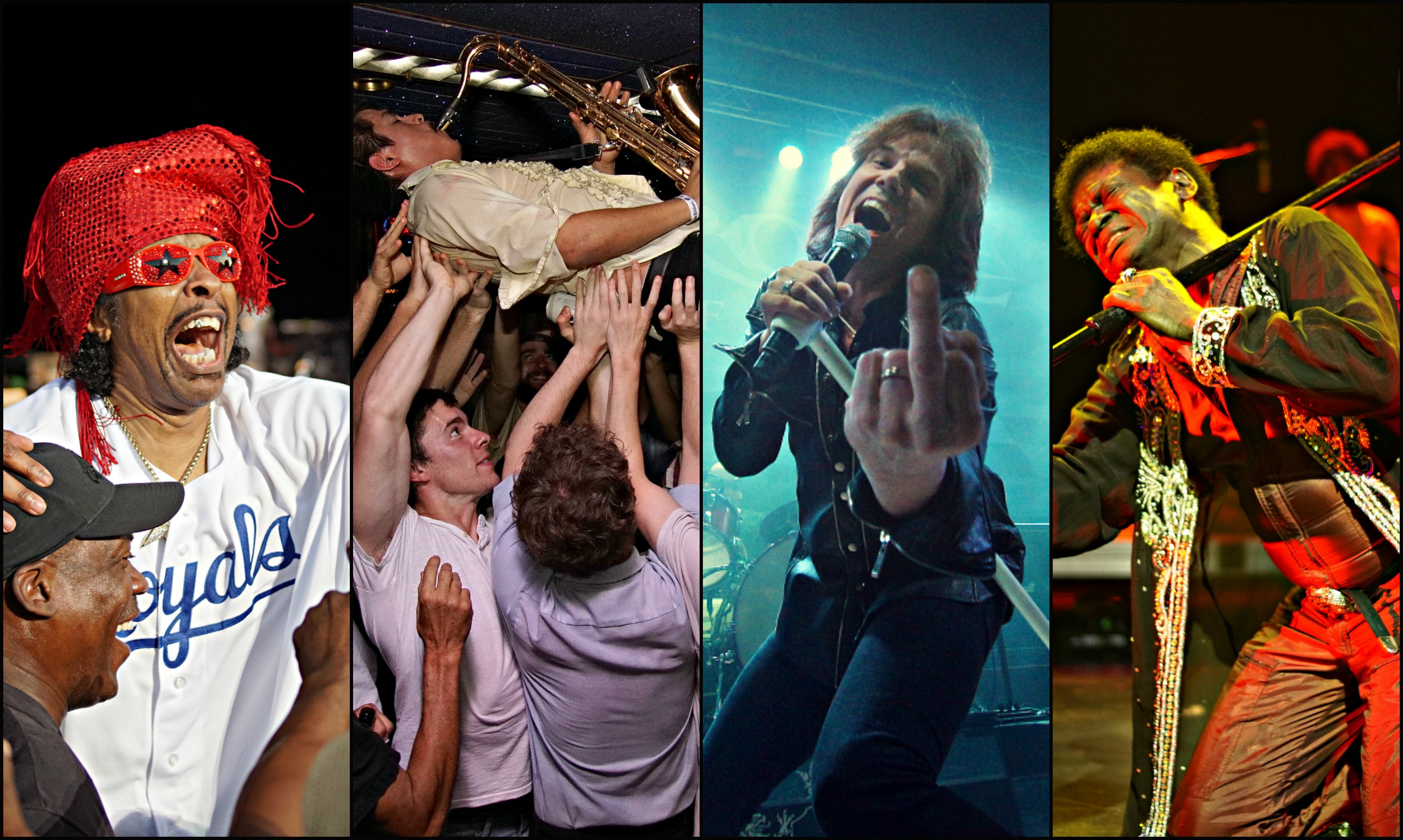 2016 was really just the pits, wasn’t it. We lost Bowie, we lost Prince, we lost democracy. BUT in Lawrence, we lived up to our music mecca reputation and had one hell of a year. This year, once again, we are counting down the Top 10 most badass things we saw from touring bands (the local list comes out later this week). Now, there are a lot of things we didn’t get to see that should have made this list. For example, Dillinger Escape Plan at the Granada should probably be on this list. But on that night, we were supporting local acts. So take this list as you will, and we hope you had as rockin’ of a year as we did.

10. Death Valley Girls at the Replay

Boy, the Replay really went to hell with this one (heh). In September, revelers turned out to deal with the devil thanks to a stunning performance from Death Valley Girls. The Burger Records rockers brought all sorts of theatrics with their self-described “occult-glam.’ They even brought Satan! For Death Valley Girls, the devil was in the details. They wore leather capes, they smeared glitter across their faces, they spoke in squirrelly voices, and kept complimenting Satan throughout the night— and when a fan handed the frontwoman a flower, she ate it.

9. Peelander-Z at the Bottleneck

When Peelander-Z comes to your town, it’s likely to be one of the most memorable events of the year. It’s a little like “Fight Club”— if this is your first night, you have to participate. The neon-clad Japanese rockers go to any lengths to make the audience part of the act. Peelander-Z absolutely loves their fans, and it shows. They’ll stick a mic in your face, throw a guitar at you, even throw their bodies at you. Everybody in the crowd gets an instrument at some point, even if it’s just a drumstick and a metal pot. Peelander-Z shows are not the type of event where you can be a fly on the wall. This is a team sport.

We were gearing up to photograph Reel Big Fish when a photographer with the tour came up to us in the photo pit, excitedly huffing and puffing. He had just come from the green room, where he saw musicians dressed as Yetis stomping around, pounding on their chests, and growling. Needless to say, this is a band that goes all the way when it comes to staying in character.

The yetis absolutely terrorized the place with vicious rock and roll. The frontman, a confrontation-loving creature who went by “Snowball,” screamed right in the faces of their fans. He bullied his way through the dense crowd at Liberty Hall more than once, wildly swinging his guitar around with little regard for who he hit in the face. At one point, he even destroyed his own set, ripping it apart. One of the guitarists backed up this behavior by proclaiming “THAT MEANS HE LIKES YOU!” to the nervous crowd.

7. NoBunny at the Replay

The Replay is generally where bands go to get rowdy, but NoBunny put all those bands to shame on a night in early November. The band members, each clad in their own bunny getup, were unruly as fuck. They tore down lighting, they lit a cymbal on fire, and when they spilled their beer, they threw the empty pitcher at the bar. All of this rambunctiousness happened while they rocked out and hopped around like bunnies.

The band (and audience) had reason for this rage. They were just a few days out of the election, and encouraged the audience to “kill your family who voted for Trump.” Unruly doesn’t even begin to describe this set.

6. Savages a the Granada 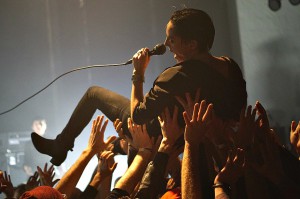 We knew the Savages set at the Granada in early April was going to be an unforgettable night when we showed up to find angry preachers on the corner. The Granada gleefully drowned them out with Black Sabbath. Meanwhile, inside, femme fury-fueled rock ruled the stage.

Savages cannot, and will not, be contained to a genre. There was absolutely no way to predict what came out of this band. Vocalist Jehnny Beth may as well have defined what it means to engage an audience. They hung on her every word, and pumped fists in solidarity with her throughout the show. By the end, the crowd was consuming her words and holding her up like the leader she is while she crowd surfed across her subjects— all while Gemma Thompson’s ruthless guitar riffs wailed in a manner that produced mind-racing styles of music. This was one of the most bodacious shows to grace the stage (and our hands) at the Granada in 2016.

5. Europe at the Granada

We walked into the Europe show knowing very little about the band, and left lifelong fans. Europe is, without a doubt, one of the greatest rock bands on Earth. Anyone who attended their January show at the Granada likely already knew this.

The Swedish metal band’s knack for memorable and instantly ear-pleasing songs extends beyond their most recognizable hit, “The Final Countdown.” They proved that their rock ballads withstand time and can hold their ground even decades later. Their stunts and talent were so over-the-top we have had a hard time coming down from this show and finding rock shows to match what we felt that night.

4. Charles Fucking Bradley at Middle of the Map Fest

We really wanted to keep Kansas City shows off this list, but you do not make a Top 10 list and ignore Mr. Charles Bradley.

By far, the absolutely fondest moment of Middle of the Map Fest this year went to Charles Bradley. The proper King of the night took his place at the throne onstage, bedazzled from head to toe (even on his robe!). “You wanna go to church?!” he asked the doting fans at the Midland before he he was met with a resounding cheer. At a time when our musical icons are dying off and our future is uncertain, a sermon from Mr. Bradley was just what we needed. It was bursting at the seams with comfort, hope, humility, and gumption— and he did it all while dancing.

Charles Bradley really is the Screaming Eagle of Soul— and if you were lucky enough to hear his call, he helped you reflect on your own.

One of the hottest shows of the Summer happened during a Latin-jaz psychedelic freakout, thanks to the rowdy musicians in Thee Commons.

The East L.A. band lived up to their Burger Records reputation when they instigated an all-out madhouse at the downtown Lawrence venue. There were wolf masks, growling vocals, backbends (so many backbends), and perfectly blended cambia and psych rock (heavy on the punk influences).

The entire band was animated, but it was the sax player who kept stealing the show. He ran outside Stiff Middle Fingers style, bolted around, lay on the ground, scaled monitors, and CROWD SURFED while vigorously hitting those notes on his sax. The audience danced harder and harder until finally, dancers were plucked out of the audience to cut a rug onstage.

2. Bootsy Collins chills with his people at the Starlight

Again, we wanted to keep Kansas City off this list, but Bootsy Collins won our hearts this Summer at the Starlight. We were there to cover Kool and the Gang along with Morris Day and the Time (they gave a sweet Prince tribute that had us all sorts of emotional). But it was Bootsy Collins, the very first act of the night, who stole the whole show.

He summoned every ounce of funk to be found in that venue and had people up and dancing in their seats, the aisles, or wherever they damn-well pleased. At one point in the night, he ripped off his sequined fabric to reveal a Kansas City Royals shirt. He then shooed away security so his fans could approach the stage. Without the threat of security, people of all ages and backgrounds came up and partied with Bootsy while he gleefully grabbed their heads and dished out hugs and high fives.

We saw a lot of live music and a lot of partying this year, but nothing… ABSOLUTELY NOTHING… tops Free State Fest with Public Enemy.

Aside from scoring points with us for hosting as many local openers (and DJs) as possible, the event was free to the public. We were in the photo pit, but when we looked out over the audience we saw every single person in town. Even those who otherwise would have never been able to afford tickets (we heard of some who were planning to spend hundreds of dollars to see them in Missouri).

This was the partiest party of the Summer and the most talked-about event of the year. When the day of the show arrived, everybody was talking about it in every store. People arrived from as far as South Lawrence, Kansas City, and Manhattan. The weather was absolutely miserable, one of the hottest days of the year (if not THE hottest). But you’d be a fool to miss this free concert on the streets of Downtown Lawrence.

The audience pumped their fists in the air, and when Flavor Flav came on, they waved their clocks in the air. It honestly looked like they just ripped them off the walls at home and brought them with. To listen to Chuck D was like watching a master at work, and Flavor Flav’s feet seemed to never touch the ground. We lost track of how many times he got a running start (and a lift from the dancers) before flying across the stage while clicking his heels together. The man is a beast— and just when he had everyone eating out of the palm of his hand, he dedicated their set to Muhammad Ali.

True to their political demeanor, Public Enemy was all about telling the truth. But true to their party demeanor, everyone had a ball. You could walk into a Public Enemy show without a very clear idea of the band’s history, and still know what they were about. They made it very clear— and in a way, it was very inviting. This was a show for everyone, and everyone showed up. From Khari Wynn’s wicked guitar lines to Chuck D’s profound lyrics that left a weighty impact, the band brought something for everyone to walk away with. In that little slice of Downtown Lawrence, sandwiched between the Arts Center and the parking garage, Public Enemy did what they do best: they took it to the streets.