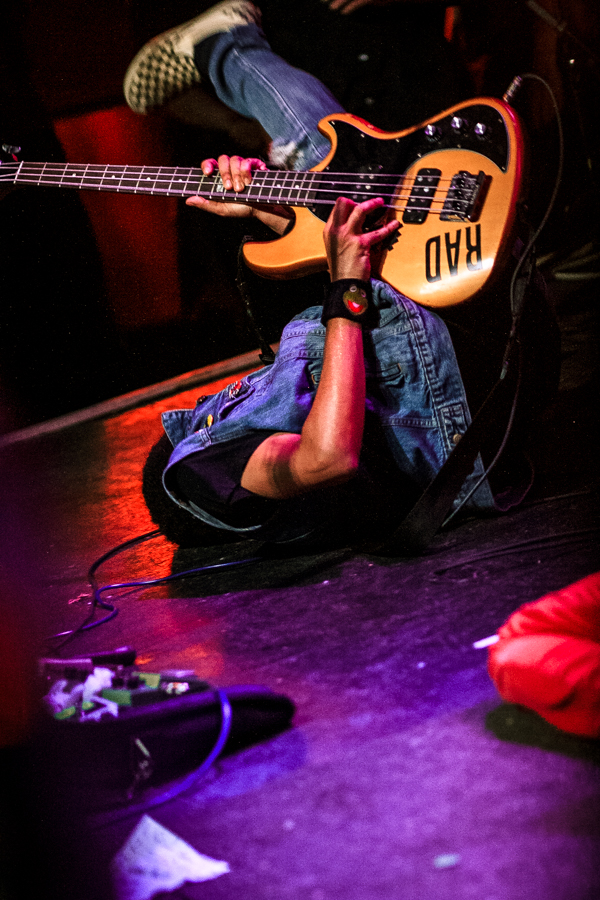 Editor’s note: Rather than staying snug in his bed with visions of sugar plums in his head, Photographer Leroy Pristach spent Christmas at recordBar for Radkey’s holiday throwdown with Drop A Grand and Stiff Middle Fingers.

Radkey is one of those bands that you have to see to believe. Going from their very first show to playing the same festival as Metallica in only five years, it’s hard to believe these guys are real (let alone barely into their 20’s).

Their sound is a bit hard to pin down too. A punk band that doesn’t so much care to be considered punk, Radkey is more the – if The Cult’s “Sun King” and Metallica’s “Ride The Lightning” coupled and birthed a band in love with The Ramones’ “Rocket to Russia” – kind of band. A sound so headbanging-ly familiar, but one you’ve not heard before. Just the way they seem to like it.

And if their sound is out there, their stage presence isn’t even on this planet. While Bassist Isaiah tears up the stage with absolute punk rock style–  either jumping into the air, worming on the floor, or somewhere barely in-between–  lead guitarist/vocalist Dee is the headbanger of the three. If he isn’t belting out his very Danzig styled vocals, the braids are flying or the guitar is getting shredded (or more than a bit of both).

With an intense, world-wide touring schedule, a perfectionist’s approach to songwriting, and a “no shits given” approach to everything else, it’s needless to say that Radkey is a band every punk, metalhead, or general rock music enthusiast should be on the look-out for.

Opening for Radkey were locals Drop a Grand, and Lawrence darlings, Stiff Middle Fingers. Unfortunately, set times were moved, so I ended up getting to the venue right as Stiff Middle Fingers was pulling their gear from the stage, which was a big bummer. However, Drop A Grand’s set pulled me right out of my sadness with their crazy tunes and twisted, holiday-inspired costumes.

Merry Christmas from I Heart Local Music and La Guerre