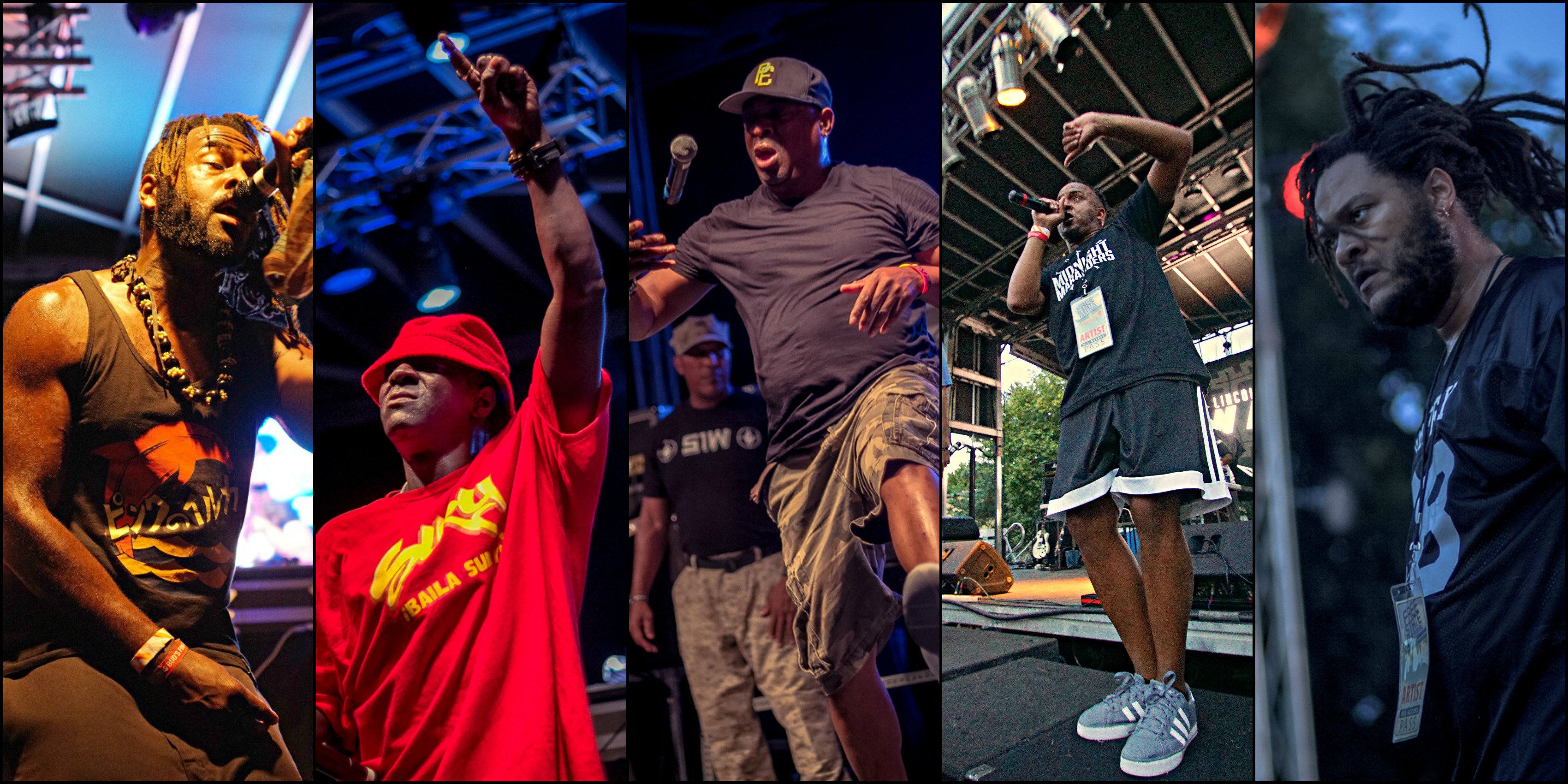 It may have been the best block party to hit Downtown Lawrence in recent years. The partiest party of the summer began with locals sprinting across the stage, and ended with Flavor Flav flying across it.

There’s no doubt that the free Public Enemy show at Free State Festival was the most talked-about event of the summer. When the week of the show arrived, there were excited whispers from every corner of Downtown. When the day of the show arrived, people as far as South Lawrence, Kansas City, and Manhattan were feverishly chatting about it. The weather was absolutely miserable, but the audience filled the streets anyway. You’d be a fool to miss this free concert on the streets of Downtown Lawrence. Everyone you know, and their grannies and aunties and uncles, were there. The front row was filled with a variety of music lovers, but if you lowered your gaze just a bit you saw it was actually children occupying the front row, grasping onto the barrier, eyes fixed on the stage.

Technical difficulties for sound checking Public Enemy’s set kept the show delayed for nearly two hours. Local DJ trio Midnight Marauders, the misting fans, cold beer, and snow cones kept everyone company until Lincoln Marshall fired up their set. We’ve said it before— if you want to get a party started properly, you bring in Approach. The man is a top-notch performer, DJ, music lover, and hip hop head. When we say he burst onto the scene with MilkDrop, we’re not exaggerating. As soon as they dived into “Mo Spins,” he sprinted out from the back, arms and palms flung open, and right away jumped whatever barrier was keeping him from the audience. The set was a short one, but they still made time for an appearance by Louiz Rip, who contributed some vocals on Lincoln Marshall’s latest release, Water. Lincoln Marshall began their set with a sound clip from Muhammad Ali, a theme that would be consistent throughout the concert (we’ll get to that in a bit). Half the times we’ve seen Approach perform, he was donning a Muhammad Ali shirt. Approach, like Ali, was so light on his feet during his performance we thought he might’ve sprouted wings at any moment.

If you didn’t get worked up during Lincoln Marshall’s set, Ebony Tusks did you in. Marty Hillard got a good portion of the audience to sing along with him. The poet has a knack for getting people to pay attention when he speaks, and made a grand impression on the audience as he confronted them with all manners of the truth. To fit in the grand number of locals opening the Public Enemy show, sets had to be limited. Add in a time crunch from a delayed soundcheck, and that time became even more precious. It’s hard to imagine what a compressed version of an Ebony Tusks set looks like, it’s an event you must experience in full.

It was when Hearts of Darkness, a band with so many members it’s a wonder they all fit on stage, started playing that the dance party really began. There were people lining every inch of the parking garage, and they were standing on cars, waving flags, and getting down just as much as the saturated audience down below. By now the heat had subsided and the cool night breeze had set in. Hearts of Darkness brought all the funk, soul, hip hop, and get down. They’re the type of band you listen to when you celebrate life and everything that comes with it.

Before Public Enemy came out, they gave Lawrence music lovers and hip hop fans a treat. Members from previous acts gathered onstage together, each spitting out a verse. Louiz Rip was first, then Approach, then Leena Will. Leena is one of the vocalists from Hearts of Darkness, and she is a national treasure. We’ve seen her sing long, beautiful, graceful notes with a couple of acts. But she also raps, and ended the Hearts of Darkness set on that talent. She has a commanding stage presence, and anyone would be lucky to have even 1/10th of the fierceness she has.

The party of the Summer was finally ready to culminate with Public Enemy’s set. The audience pumped their fists in the air as they took the stage. The band had these dancers, two large military men wearing camouflage pants and hats, that spent half their time showing off their fancy footwork and the other half standing as still as statues behind Chuck D with their arms firmly crossed. The sound of the audience’s cheer was deafening at this point, but DJ Lord still managed to up the volume. To listen to Chuck D is watching a master at work.

By the time Flavor Flav came out, anyone in the audience who had brought along a clock was now waving it frantically in the air. Flavor Flav himself didn’t pull out his signature clock necklace until a couple of songs in. He built up to it, then flung it out at the end of a song, and everyone squealed. Flavor Flav knew how to work a crowd. We lost count of how many times he’d get a running start, have one of the military dancers hoist him up, and fly across the stage while clicking his heels together. The man is a beast. When he really had everyone eating out of the palm of his hand, he dedicated his set to their socially conscious brother Muhammad Ali.

True to their political demeanor, Public Enemy was all about telling the truth. But true to their party demeanor, everyone had a ball. You could walk into a Public Enemy show without a very clear idea of the band’s history, and still know what they were about. They made it very clear— and in a way, it was very inviting. This was a show for everyone, and everyone showed up. From Khari Wynn’s wicked guitar lines to Chuck D’s profound lyrics that left a weighty impact, the band brought something for everyone to walk away with. In that little slice of Downtown Lawrence, sandwiched between the Arts Center and the parking garage, Public Enemy did what they do best: they took it to the streets.