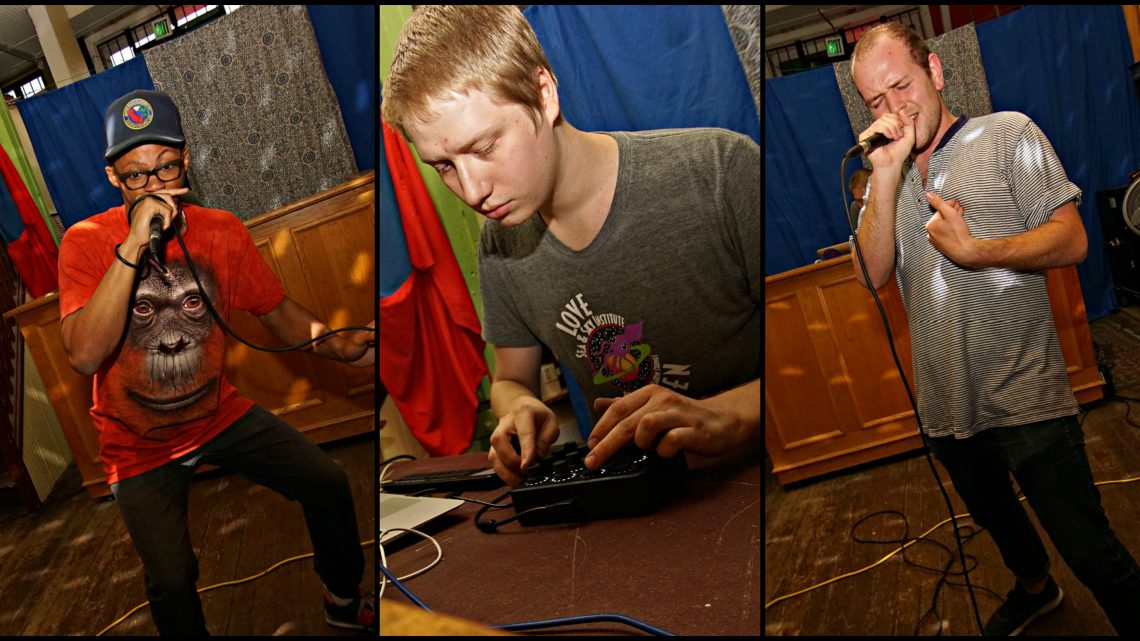 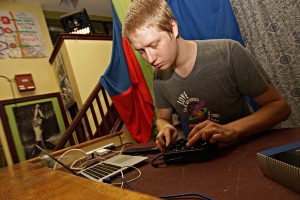 Electronic music and independent hip hop have been making small rumblings in Lawrence, and they’re likely to start making waves soon. Some of these incidents can be traced back to the Vivid Zebra collective and one of its primary leaders, electronic music producer Alex Calhoun (who performs under the name “alccalh”). We previously reported that he’s been releasing tracks collaborating with local artists, and Love Garden’s in-store performance on Saturday foreshadowed more collaborations to come.

His music is so versatile, you can dance, chill, or do nothing at all. Calhoun’s tracks are so completely and unapologetically for everyone, and that’s why he’ll do great here. You’ll likely see his name popping up more as we predict more partnerships with local musicians. He is talented beyond our dreams– and if things go well, electronic music will make a more established presence here. 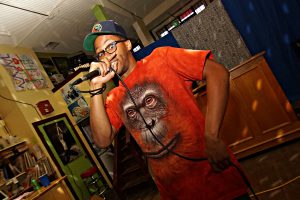 Calhoun started off the night at Love Garden, but stayed on for the rest of the lineup. Ricky Roosevelt, also known as Jarred Morris, took a turn at the mic next. His physical presence is lively, constantly bouncing and pacing while twirling the mic cord. But his verses are at the opposite end of the spectrum. With his steady baritone, Ricky Roosevelt is so completely low key and effortlessly sincere as he keeps a serene demeanor about the performance area. He’s been busy releasing a never-ending stream of new tracks throughout the year– but even when he performed a song for the first time at the Love Garden show, he was calm and collected. That attitude, along with honest and vulnerable lyrics, may very well crown Ricky Roosevelt as the King of Chill in LFK. 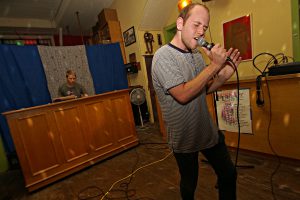 Raymond, a Lawrence via Topeka vocalist, rounded out the night with a series of slow jams. Raymond, in case you weren’t aware, has the voice of a God damn angel. His words are smooth, slow, and encouraging. Lines like “Fuck ’em if they don’t like you” never sounded so soothing. Those falsettos will make sweet, sweet love to your ears (so you can make sweet, sweet love to whoever you damn well please) while Raymond sways and delicately sweeps his hands throughout the air.

It’s hard to tell when, exactly, electronic music will make a solid comeback. We see a lot of grand ideas turn up but eventually settle into DJ nights and petty party music. But if the Vivid Zebra collective keeps birthing acts like these, there could be something physical brought to the forefront of the Lawrence music scene (and Alex Calhoun will likely be there every step of the way). We’ll keep our fingers crossed while Raymond whispers sweet sonnets into our ears: