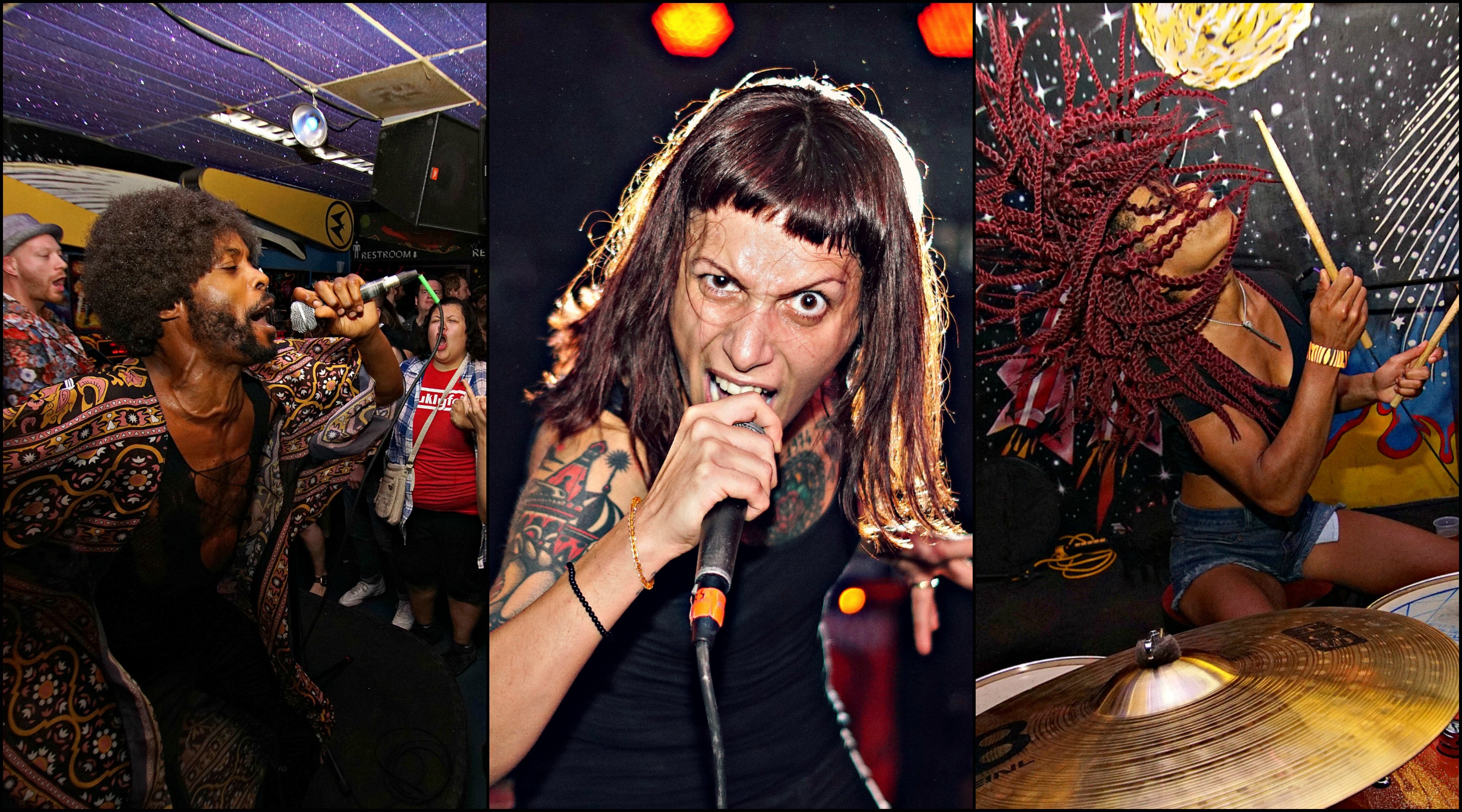 The end of the year seems to be a time to go over all the grievances society had the misfortune of experiencing. But here at I Heart Local Music, we like to look back and say “Whoa! That was one hell of a show, man!” As with years past, we are counting down the top ten most badass things we saw in live music.

1. We kept Kansas City shows off this list. There was a lot going on in Lawrence this year, and we devoted every waking second we had to this music scene.

2. As always, we didn’t get to every show. There are definitely going to be shows that deserve to be on this list, but we didn’t cover them. This list is compiled just from the ones we saw.

That being said, we had our hands entirely full covering shows four to six nights a week. It’s been an exciting year in live music. Now, let’s get started.

Spring had officially sprung in Lawrence when Sleigh Bells stormed through the Granada. Touting songs from Jessica Rabbit, Alexis Krauss and Derek Miller were the very definition of spirited. Krauss’ energy was through the roof and, with the aid of her powerhouse vocals and blaring light show, she lunged all across the stage while interacting with her fans. There was so much headbanging at the show, it nearly rivaled a metal show at the Replay. You couldn’t help but feel overwhelmed with fun. Resisting the urge to move was futile, and fans were under the spell of these happy, aggressive, and potent hooks. It’s also worth noting that opener Tunde Olaniran, a performer clad with emotionally rich songs and two backup dancers, nearly stole the show. He’s worth your time if you haven’t heard of him, and the Flint, MI, native is doing good work by instilling positivity and judgement-free zones at his shows.

Back in March, we learned that nobody’s fans throw down harder than Suicidal Tendencies’. The energy from the legendary punks was not only insane, it was infectious. Fans at Liberty Hall had no problem keeping up with that momentum. The band never stayed in the same spot for more than a few seconds, and neither did the fans. There was such a wide array of ages at the show, likely because Mike Muir’s anti-establishment lyrics still ring loud and clear across all generations. There were teens with X’s on their hands, and there were folks who had been seeing the band live since 1992. But no matter the age, they all joined the band onstage at the end to thrash and absolutely lose their minds. Fans don’t really rush the stage at big shows anymore, and it was a sight to see.

Y’all, we’re not supposed to play favorites in journalism. But Chew’s drummer might be our favorite drummer on the planet. In August, the band finally hit up Lawrence on their tour. Chew destroyed what would have otherwise been a quiet weeknight. They were absolute maniacs, with hardly a moment where they stood still.

Between their spritely (and expressive) bassist and their outrageously captivating drummer, it was easy to bask in their fuzz-filled fun. Their jazzy and psychedelic noises were completely out there— a bit avant grade, even— as though the musical genius of Jonny Greenwood was split into three horcruxes that embodied each musician. The band is best served live, with a grandiose stage presence that knows no boundaries. They were magnificent to the millionth degree, and we’ll be biting our nails until they return.

Brick and Mortar headlined the Bottleneck in August. Then, in a grand stroke of luck, they returned in December in support of The Wrecks. This is perhaps the most vivid live show we saw all year, saturated with neon colors, costumes, and projections. The Jersey band enjoys intense bouts of tom-foolery (possibly to counter some of their darker, tongue-in-cheek lyrics regarding mental illness and general societal ailments). But the band loves theatrics, and they came armed with antics each time. They flailed giant hands, popped balloons full of confetti, dressed up as death, and appeared as something we can only describe as the pope of drugs. This was all before we even saw a member of the band dressed as a giant medicine bottle handing out “pills” to the audience.

You might not think of an aging country crooner as “badass,” but Junior Brown definitely earned a spot right in the middle of this list. Under a perfect Autumn sky outside the Lawrence Arts Center, it took every ounce of strength to keep fans from salivating over his every maneuver. His deep, sexy, drawled baritone was a stark contrast from his lightning-fast fingers that worked at a constant, steady speed on his guitar. One hand would feverishly pluck and slide away while the other drop-tuned on the spot. The man himself is far above any normal instrument, having invented the guis-steel guitar back in the 80’s to keep up with his talents. He was an absolute treat, an the couldn’t have possibly oozed more coolness if he tried.

On a mild August evening, thousands of Lawrencians flocked to the Warehouse Arts District for an unforgettable outdoor concert of grand proportions. The event was celebrating the opening of Lawrence Beer Co (in the former SeedCo building). You guys, everyone was at this show. There were old ska punks who maintained the lifestyle, their kids, other people’s kids, beer enthusiasts, local music enthusiasts, rockers, party kids, and a dog in a little hat (who made it onstage during the show).

That huge crowd gleefully ingested the band’s tireless and vigorous stage show. The plaid-clad lads came armed with a lengthy set list and lively maneuvers. Even though the audience was packed in tightly on the dirt lot, they were able to dance and move every inch they were allowed. The night was memorably marked by the moment Dicky Barrett snatched dozens of children from the crowd and invited them onstage. Children have endless amounts of animated energy, and for one night they were the most punk rock kids in all of LFK.

In September, Sheer Mag proved that they are one of the only great American rock bands of this generation. The Philadelphia band blew through the Bottleneck with their completely no-bullshit rock and roll sound. Vocalist Tina Hallady has one of those absolutely unforgettable voices, with vocals so raw and full of soul it just ripped your heart out and stomped on it. She was so menacing, so cool, and left this music town seething with both jealousy and admiration.

A couple of months ago, Barb Wire Dolls came through the Bottleneck. But it was opener Svetlanas that absolutely stole the show. 2017 is the year of female rage, and Svetlanas knocked you upside the head with it. They have an aggressive and absurd-as-hell brand of punk that strikes fear right into your heart. Vocalist Olga sported such a menacing mug, she made Rollins look like a weenie. When she stared you dead in the eye and shrieked “EVERYBODY KNOWS SVETLANAS LIKE TO LOSE CONTROL!” we did not doubt her for one second.

The band also gets extra points for dropping off the tour a short time later when they allegedly refused to play for Nazis and white supremacists in the audience.

Every jump, every shimmy, every slide drove the crowd mad— they applauded and squealed with absolute elation at his every move. If the boogying didn’t energize and revive your body, soul, and mind, the lyrics did. Puscie tackled anything from weed to queerness, it was all on the table.

The dancing was unreal, a get-down of grand proportions demanded by our commander-in-funk, Puscie Jones. Nobody’s hips were safe, and there was love aaaaall over that dance floor. It was complete, unapologetic happiness at a time when our country needed it the most. The glee! The delight! The sequin-covered bliss! Looking back on the catastrophe that was 2017, we’re grateful that the Puscie Jones Revue came through for all of you. Puscie Jones is, without a doubt, the raddest and baddest performer around.

About three songs into Princess Nokia’s show, we knew this was going to be the event of the year.

The only thing that has made this unbelievable year of racist, sexist, prejudice garbage bearable likely came from the hard work of women of color. Auntie Maxine helped us reclaim our time, Tarana Burke created the #MeToo movement (which ended up ousting several sex offenders in entertainment and politics), and Princess Nokia proved the future of hip-hop belongs to women.

The first order of business at her spectacular Granada show was to order all the men to take a step (or 30) back. This show was for the ladies, the queers, the femmes, and the POC. The Afro-Puerto Rican hip-hop star, who shot to fame thanks to her brazen and unapologetic femme-fueled rhymes, stormed the Granada stage right away with her anthem “Tomboy” before laying down the rules. Men had to make way for the women, and she demanded everyone’s attention, saying “Let me speak” before explaining the safe space rules of the show (taking care of trans peers was a priority).

Once the law of the land had been explained and women were at the front, she jumped on them and crowd surfed. The notion of this woman’s show is that girls like to party, too (and shouldn’t be sorry for it). You couldn’t even so much as blink at a Princess Nokia set, you would’ve missed something absolutely insane. She rode an inflatable pizza (the partiest food of them all!), she lotioned up between songs and ranted about eczema, and when she didn’t have the music for “Goth Kid,” she went at it acapella.

She loved intimidating the KU student-heavy crowd (and they loved taking it), yelling “Where the Freshman at?” A few cheered, and she responded with a sinister look “Good, we can sacrifice y’all first.” Princess Nokia got right up in everybody’s faces. She touched every single person who reached out for her love with their X-marked hands. All this rapper with goth in her heart had to do was flash that charismatic grin, and she immediately felt like the most relatable person in the world (even though you knew she was on another level).

If there’s one thing the 2017 music scene made clear, it was that the future of hip-hop belongs to women. Cardi B and Princess Nokia are dominating on a national level, while Cuee and Stitch81Classic are holding it down at home. And if her outstanding performance at the Granada didn’t prove her righteousness to you, never forget that a few days after that show, she (once again) went viral online after a video surfaced of her throwing hot soup on a racist. “Any other racists wanna try us again?” she later stated online. So fellas, follow her orders and keep taking a step back. Princess Nokia is clearly the hero we all needed in 2017 and the most badass performer we saw all year.