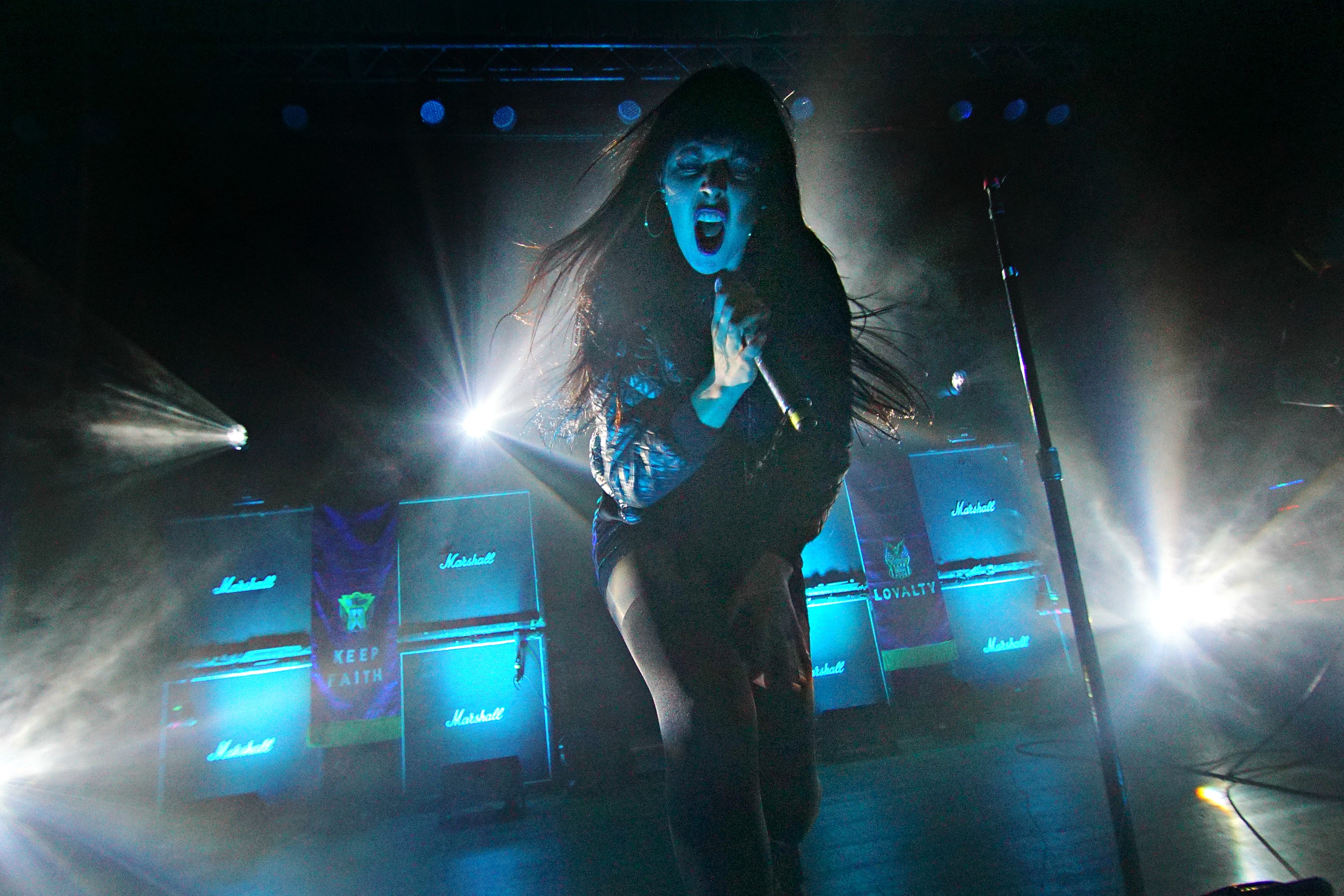 A full day of St. Ptrick’s Day festivities was no match for the irresistibly catchy tunes Sleigh Bells delivered to the Granada on Friday night. No matter what you had done up until that point in the day, you were going to dance.

Touting songs from their latest album, Jessica Rabbit, Alexis Krauss and Derek Miller were the very definition of spirited. Krauss’ energy, in particular, was through the roof (proving she’s come a long way since her last Lawrence stop in 2012). The sprightly performer with a powerhouse voice lunged all across the stage while performing, occasionally jumping onto a box to interact with fans. There was so much headbanging at this show (from both the performers and the fans), it nearly rivaled a metal show at the Replay.

Blaring lights that erupted against guitars at the highest volume meant you couldn’t help but grow overwhelmed with fun. Resisting the urge to move or even headbang along became futile. Sleigh Bells have the unique ability to produce happy, aggressive, and potent hooks that dig deep into your skull. No, think deeper. Like, you’re going to be humming them all the way home from the show and then putting their records on once you’re in your room.

On this tour, Sleigh Bells are joined by the absolutely alluring Tunde Olaniran. If there’s one musician who can absolutely embody joy and struggle at the same time, it’s Olaniran. The banners that hung on the stage prior to his notable entrance foreshadowed what was to come. “THIS IS A SAFE SPACE,” they read in bold caps. “NO ABLEISM. NO SHAMING. NO FATPHOBIA. NO FEMMEPHOBIA. NO TRANSPHOBIA. NO RACISM. NO SEXISM. BE KIND. BE BRAVE. BE VULNERABLE.” The rules were clearly stated, and even on a rowdy day like St. Patrick’s Day, the fans were ready to oblige.

The Flint, MI, native made a grand entrance to the stage, accompanied by two dancers clad in white with black tasseled veils covering their faces. These dancers were half the fun of the set, constantly whipping out dramatic and powerful moves while shedding a layer of clothing with each song, revealing a new getup for the following tune.

Olaniran hit up a number of themes in his music. One moment, he’s giving us an “existential rap about being on the internet.” The next, he’s got the audience chanting “Malia Obama!”, who he insists he relates to because they’re both “awkward.” We disagree with that sentiment, we saw Olaniran (and Malia) as nothing but graceful. The crowd lost if for every single little twirl, dance move, or hair flip. Sometimes he was rapping, sometimes he was soulful, but he was always 100 percent punk as fuck. Projecting positivity and a glowing message of acceptance seems to be the new punk these days, anyway.

His songs were always preceded by short speeches about acceptance and being yourself. We never felt more free to be anything we wanted than when Olaniran took the stage. There was a comfort in knowing that every message of hope he spit out came from a dark place— and no doubt hailing from Flint, MI, plays a part in that. But if there’s one performer whose words music fans need to pay attention to at this point in our history, it’s Olaniran.