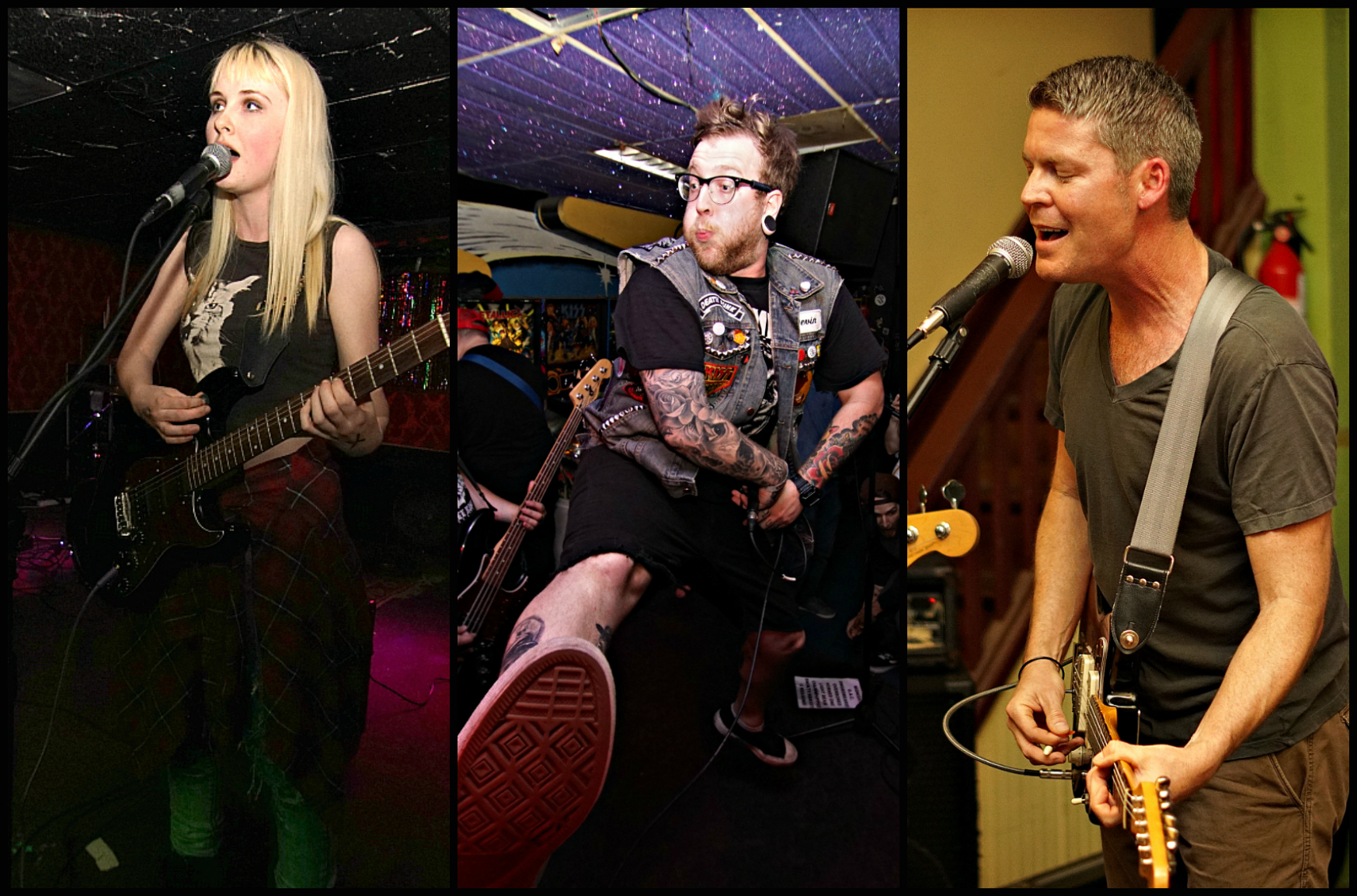 Anymore, Friday nights in Lawrence are pretty outrageous. There are just so many events happening at once. This wasn’t even a Final Fridays art walk, and Downtown Lawrence was still brimming with activity. We headed out on what we perceived as a typical Friday evening (when the weather is warm) on April 22nd to show just how many options a Lawrencian has for live music, and how any of these events can be impressively affordable. The following night of entertainment cost less than $15. 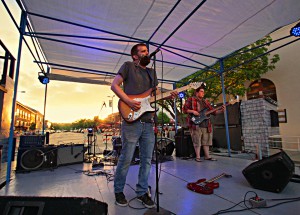 We’ll admit it, this is kind of a unique event. Brody Buster and his band were playing a large stage set up in the middle of Downtown Lawrence right at 8th and Massachusetts. This was part of the yearly Shot Put event, which brings world famous athletes to the area to show off their Hercules-like strength and skill. Yes, it is an event that happens once a year. But the city hosts several free events involving street parties 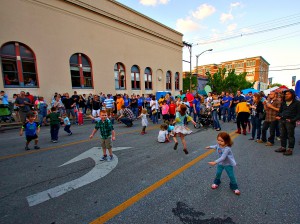 and local bands throughout the year when the weather is nice. On any given weekend over the Spring and Summer, you might find yourself at events like the Downtown Shot Put, Busker Fest, Free State Fest, or more.

Brody Buster’s set was especially enjoyable for the town because vendors provided plenty of activities, such as games and face painting for families, and the whole spectacle was free. Men, women, families, drunks, KU Cheerleaders, dogs in tiny hats… they were all there for this lively and highly local shindig. 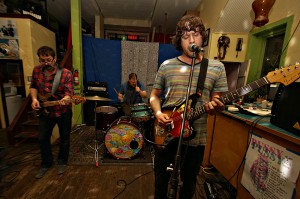 It’s not just you, shows at Love Garden have actually gotten louder. The beloved local record store has been slowly upgrading their sound setup over the last year, culminating in one of their many in-store performances that almost always feature local 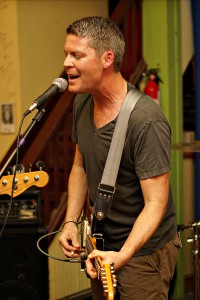 bands. On this night, they just happened to pick two very loud ones… so loud, in fact, that one of the musicians came sauntering in at the start of the show with a large box of ear plugs to hand out to the audience. The last time we saw a band do this was when Muscle Worship (the other “loudest” band in Lawrence) played the basement at the Taproom in 2013.

The noise level at this show nearly rivaled Muscle Worship’s auditory assault thanks to the profound shoegaze wails and reverbs brought on by SONA, as well as Major Games’ ever-persistent deafening guitars and thundering bass. The event celebrated Travis Millard’s artwork, which is featured on the Major Games album cover. 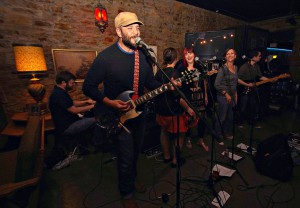 Even though we had a hefty number of shows to get to on this night, we still had time for a dinner break before heading across the bridge and over the river to everyone’s favorite little hole in the wall, Frank’s North Star Tavern. Kansas City folk rockers My Oh My! were opening for 40 Watt Dreams, and featured a hefty lineup that crowded into the upstairs portion of the venue (which has been leaning more towards having their bands play upstairs rather than downstairs as of late). The somewhat older crowd still enjoyed the incredibly danceable and bustling numbers, and many tapped their feet and clapped along with the band. But nobody had more fun than 40 Watt Dreams’ Katie and Mike West (also of Truckstop Honeymoon), who used every opportunity they could to jump up and take part in some highly spirited dancing with one another (you can catch a glimpse of it every now and then in the video below). 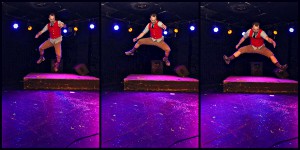 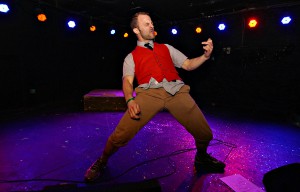 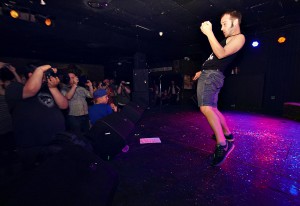 Finland in 2013, where he placed 1st. Secondly, musicians from all corners of the scene enjoy taking part in this.

Naturally, Melin was the host of the Lawrence competition on Friday. Musicians and their peers both competed and spectated at this wildly entertaining event. You got to see a side of the town that doesn’t always come out to play— the spritely, comical, and overall good-natured side. Competitors dabbled in pun-based names, such as CindAIRella and LattAIR-Day Saint. Their physical stunts and agility were impressive enough, but the merriment they brought to the festivities was even more relevant as folks from all walks of life heartily cheered on their peers throughout the night. 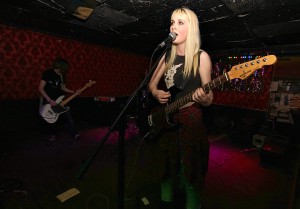 The Jackpot is an important asset to Lawrence because it’s one of the few places that will actually host all-ages shows with local lineups. Because of the rules in Lawrence, all-ages shows have to end by midnight and therefore start earlier. Don’t scoff at the thought of a venue full of youngins, this is an important thing to have because these are the kids who are going to be ruling the Replay in two or three years. 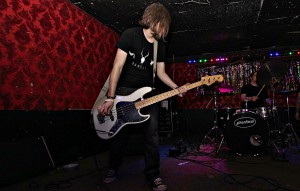 So, to indulge our lust for 90’s sludgy grunge, we turned to Sunday Heroine. The band is fronted by a teenager so talented, we can’t believe how lucky Lawrence is to have her. Max Lock is an exquisite songwriter, having written hundreds of songs before her 16th birthday. Now, as she crosses over to that stage in her life between high school and Replay-legal, she finds her band Sunday Heroine frequenting the Jackpot. The venue was filled with underage kids, but wouldn’t you rather have them watching a band like Sunday Heroine over some garbage pop act on tour? We have nothing but adoration and encouragement for a venue that offers a stage to the younger generation who contemplate making Lawrence their personal music scene in the very near future. 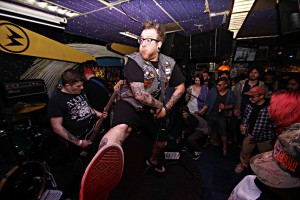 The venue has always been more of a punk/rock scene, but over the last year the Replay has really been establishing itself as a punk rock venue (especially with events like Three-Headed Thursdays. It’s also been the recent trend that if you are there on a Friday or Saturday, you will likely get your ass kicked in a mosh pit (or something close to it). 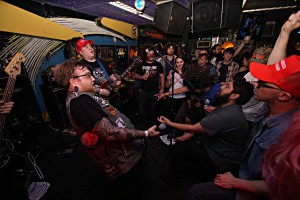 Somehow, we’ve seen Young Bull play three times in less than two weeks. The hardcore rockers have been busy. Gnarly Davidson is also on the busier end, because the show served as their tour kickoff. 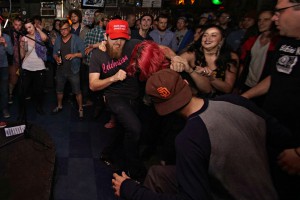 The place was stuffed, and it was stuffy. You couldn’t move a step without dramatically pushing someone in an uncomfortable direction. Then, to top it all off, this crowd was ready to PARTY. They raged and they thrashed, they kicked and they bashed. The Replay has been an increasingly more physically aggressive place to enjoy live music, and Young Bull has been one of those bands leading the charge. The guitarists were nearly stacked on each other as they leaned back and menacingly swayed about the stage— and when the vocalist ran out of room for his own high kicks and forceful punches into the air, he dove into the crowd and got down with them right then and there. It was like watching a beautiful, drunken ballet… and everyone was the Black Swan. Because at the end of the night, especially one full of such loud and brazen music, shouldn’t we all be limping home? Watching the sweat and beer-soaked casualties file out of the Replay and into the streets is a reward worth sticking around for at the end of the night.

Certainly, there were more shows than just the ones we listed above. For those seeking a dance party to kick off their weekend, Sellout at the Granada was likely the place to be. The Jazzhaus also holds its own in the dance party realm, but more along the line of “Hipster Jam Fusion Rock,” according to their website’s description of The Cosmopolitics.

The one glaringly obvious missing genre from the night was hip hop (two local hip hop acts actually had a show in Kansas City on this night). We would have liked to have caught a hip hop show, but we didn’t see any at the venues we stopped at on Friday. We’ve mentioned before that Lawrence has a problem with recognizing the hip hop community. The talent is there, we have Left E. Grove, BarrelMaker, Approach, Stik Figa, Dom Chronicles, MilkDrop… and dozens more we’ve seen and covered from time to time. But the one shared trait all these shows have is a very low audience attendance. It seems this town has no problem showing up for the notoriety of the big touring acts, but can’t even be bothered to support the incredible wealth of talent from rappers in their own backyards.

The point is, get out and see a show. You don’t have to see six shows in one night (although if you did, it would cost less then a meal at a restaurant). But on any given night, you can see quality musicians with actual talent for just a few dollars (surely you can dig that out of the couch)— and now that the weather is nicer, you’ll likely catch a free show on the weekends. A fellow music journalist once told me “Everyone thinks their town has the best music scene. But in Lawrence, that just so happens to be true.”

See you at the show.

Hipshot Killer are rad as fuck