The moment The Hips started playing as the first band at Spring into Summer fest, tornado sirens started sounding in the Lawrence area. Luckily, a funnel cloud never appeared. So I think it’s safe to say that The Hips fought the tornado, and won. 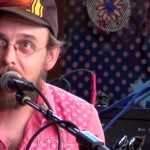 It’s a good thing we never saw a tornado on Saturday night. Scores of bands were set to play the local music festival for the next eight hours.

The Hips started off the evening nice and slow under overcast skies on the Replay patio. I couldn’t help but notice all the children and babies present at the show, what with it being an early patio set. This could have made for some awkward moments considering how sultry and sexual the band’s lyrics are, but the songs are just cheeky enough to pass. The set headed towards a more upbeat direction before ending on a peppy note. It was a good way to work the crowd. Now, we were ready to party. 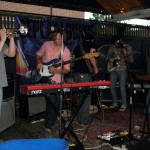 I’m really warming up to Colony Collapse. And what’s not to like? They play lengthy, beautiful songs that are filled with time signature changes and adorable lyrics. I also love watching the floppy-haired blonde bass player, who bounces his curls all over the place when plays.

Here’s a song they wrote about the Kansas prairie, which was pretty fitting under soon-to-be stormy skies. 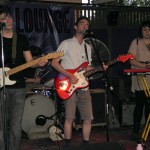 Fresh off of their Austin City Limits stint, Hospital Ships played hard and full of vigor on Saturday night. It was perfect, because it matched the buzzed mood of the audience.

The patio had grown crowded by this point, but one thing stuck out like a sore thumb. All but two members of Hospital Ships had accidentally matching outfits (they had plain black t-shirts on). Katlyn Conroy joked “I didn’t get the memo, apparently. I feel like a jerk now,” to which frontman Jordan Geiger responded “Only the help wears black t-shirts.”

It’s a little known fact that Conroy is terribly afraid of severe weather (with good reason, seeing as how she had to suffer a tornado’s wrath once). So it was a bit admirable that she braved the storm and made it out to the show.

Each member of this band truly and genuinely loves music. Nicholas Stahl is a self taught drummer, and Mitch Jones is only recently a bass player. Conroy and Taylor Holenbeck are caught in a whirlwind of other projects, but together they all perform beautifully and it just makes sense. 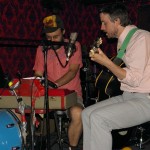 It was time for a change of scenery, so I left the Replay patio and headed over to the Jackpot for Drakkar Sauna.

Wallace Cochran had his adorable family in tow, and so did several other people. At one point, there appeared to be a wall of children covering the booths at the Jackpot. It didn’t take any time at all for the hall to fill up. Everyone knows Drakkar Sauna sets are just precious. WIth Cochran and Jeff Stolz crouched in the center of the stage, Drakkar Sauna put on a beautifully intimate performance.

After a vigorous five years of recording, performing and touring, Drakkar Sauna’s been taking it a bit easy lately (which allowed for some nice side projects, like The Hips and Dr. Octor). Keeping Drakkar Sauna shows sparse made tonight’s show a real treat. No wonder the place was so full. 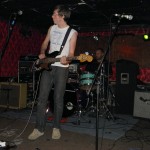 The drummer for The Dactyls was running late. He got caught up in the storm in Topeka, so to entertain the crowd, the band started quoting lines from Twister. For that, I’ll treasure them forever (my love for that movie runs deep). The band tends to get saucy during sound checks anyway, so there’s never a dull moment.

They were getting pressed for time when the drummer came running in, but that guy is a machine. He ran in straight off the street, sat down at the drum set and started playing like nobody’s business. The Dactyls then proceeded to kill it.

They played a couple of songs I hadn’t heard before, and it blew me away. Actually, the whole set did. It sounded like they had been practicing like crazy (although when I talked to the band later, they informed me that wasn’t the case). Everything sounded tighter, harder and faster than before. They broke more of a sweat than what they usually do, and I’d never bobbed my head to their music that hard before. Seeing The Dactyls absolutely kill it at the Jackpot may have been one of the nicest surprises of the night. 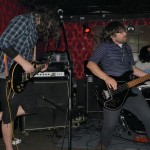 Mansion immediately dived into a whirlwind of noise, fuzz and metal. This is one of those bands you’d kill to be in just because their set is one long, vicious jam that melts your face with rock. It feels like five friends getting together and having an out-of-this-world time. I want to party with these guys. Mansion grabs you by the nuts, and doesn’t let go for 30 minutes. 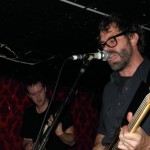 There’s nothing quite like seeing every television screen (as well as the projector) at the Jackpot go black and then suddenly pop up a tornado warning. It is that kind of sudden fear that set the stage for Major Games.

This band’s music will murder you with rock. It starts slow, and progresses into just absolute mayhem. It felt like a sneak attack turned panicked frenzy. The drummer was absolutely wild, holding a steady beat to keep you disillusioned. The guitar player’s hand was flying at a million miles an hour, and he was heavy on the noise. This is a band that leaves you seriously shaken AND stirred.

They should have called this event Spring into an ass-kicking. The most wicked of all storms launched as a backdrop for some of Lawrence’s most vicious bands (to see who else played at the festival, click here).

Earlier during the Hospital Ships set, Jordan Geiger leaned into the mic and said “I’m glad a tornado didn’t hit this because, aside from being dead, all my favorite bands would be gone as well.” Well Jordan, I think it’s going to take more than a little storm to knock out the music scene. Saturday night was a proud display of what Lawrence has to offer. I think even if a tornado did come through and rip out the town, there would still be a place to see an incredible local show. I hear there’s a ditch somewhere hosting some good shows now…

I’m looking forward to a summer season full of fantastic music and superb performances. As Geiger said at the end of the Hospital Ships set, “Happy summer, motherfuckers!”

Photographer Micki Hadley took some photos of the event. Please click here to view them.