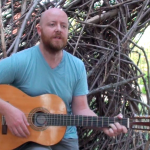 I love Sam Billen for a number of reasons. He’s been involved with projects that I love (The Billions), he puts out adorable Christmas albums and he let me shove him up in some sort of tree structure and record him playing a song. But what I like most of all is the fact the he gets it: local is where it’s at.

The smooth singer/songwriter is releasing a new album full of remixes and covers called Removers. Sure, he remixes and covers some popular music, but he also pays his dues to the local inspirations. “I took a handful of songs that I thought influenced me,” said Billen. “I covered a Republic Tigers song, a Capybara song….it’s pretty cool to do bands that I know and have loved for so long.”

Billen tends to keep himself pretty busy, so keep an eye on The Record Machine for constant updates about new music and performances from the artist. In a few months, you can expect to see yet another album from the Lawrence crooner. In the meantime, enjoy Removers and this beautiful new number from the songbird perched in this tree on the KU Campus:

Previous Article Here I am, rock you like a hurricane: Lawrence bands weather the storm for Spring into Summer Fest