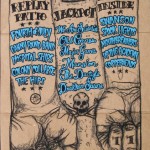 Saturday will probably go down as the local music event of the year in Lawrence. In a beautifully and hectically arranged evening, scores of bands and musicians are set to play three stages at the Jackpot and Replay for the Spring into Summer Fest. The night features musical delight from bands such as Fourth of July, Old Canes, The Hips and Major Games.

Danny Pound will be performing with his usual posse. The band recently changed their name from The Danny Pound Band to Murky Aquariums. Pound always jokes about the name change. “We thought people would think we were some new exciting hip, young band,” said Pound. “It didn’t work. It hasn’t worked thus far.”

All jokes aside, Danny Pound and crew are expected to draw a crowd. They’ve been performing for a number of years in Lawrence, and consistently pull in the fans. But he’s hoping to take in a little music as well. “I’m looking forward to going and catching Drakkar Sauna and the Dactyls,” said Pound. “Hopefully a festive, enjoyable kind of musical experience.”

You can expect waves of support like that between the bands. For Wallace Cochran, of Drakkar Sauna, his set time comes early enough to kick back, relax and watch his fellow musicians. “It’s pretty great for me because I get to watch [bandmate] Jeff play with the hips, and then play a short set with him,” said Cochran. “The Hips have put out my favorite record of the last few months.”

With such a stellar lineup that spans several hours, Saturday’s show might be a big ordeal. But for most bands, the music won’t stop. The live performance holds weight for Cochran. “It’s the most fun thing,” he said. “There’s a mixture of arrogance and delusion that can only be satisfied by playing music in front of people.”

For others, like Pound, it’s important to keep on trucking. “Sitting at home writing is one thing, recording is another thing, then a life performance is a thing unto itself,” said Pound. “You want to remind people that you’re not dead.”

To see Pound, Cochran and a host of others alive and kicking, head to Spring into Summer Fest on Saturday at the Jackpot and Replay.