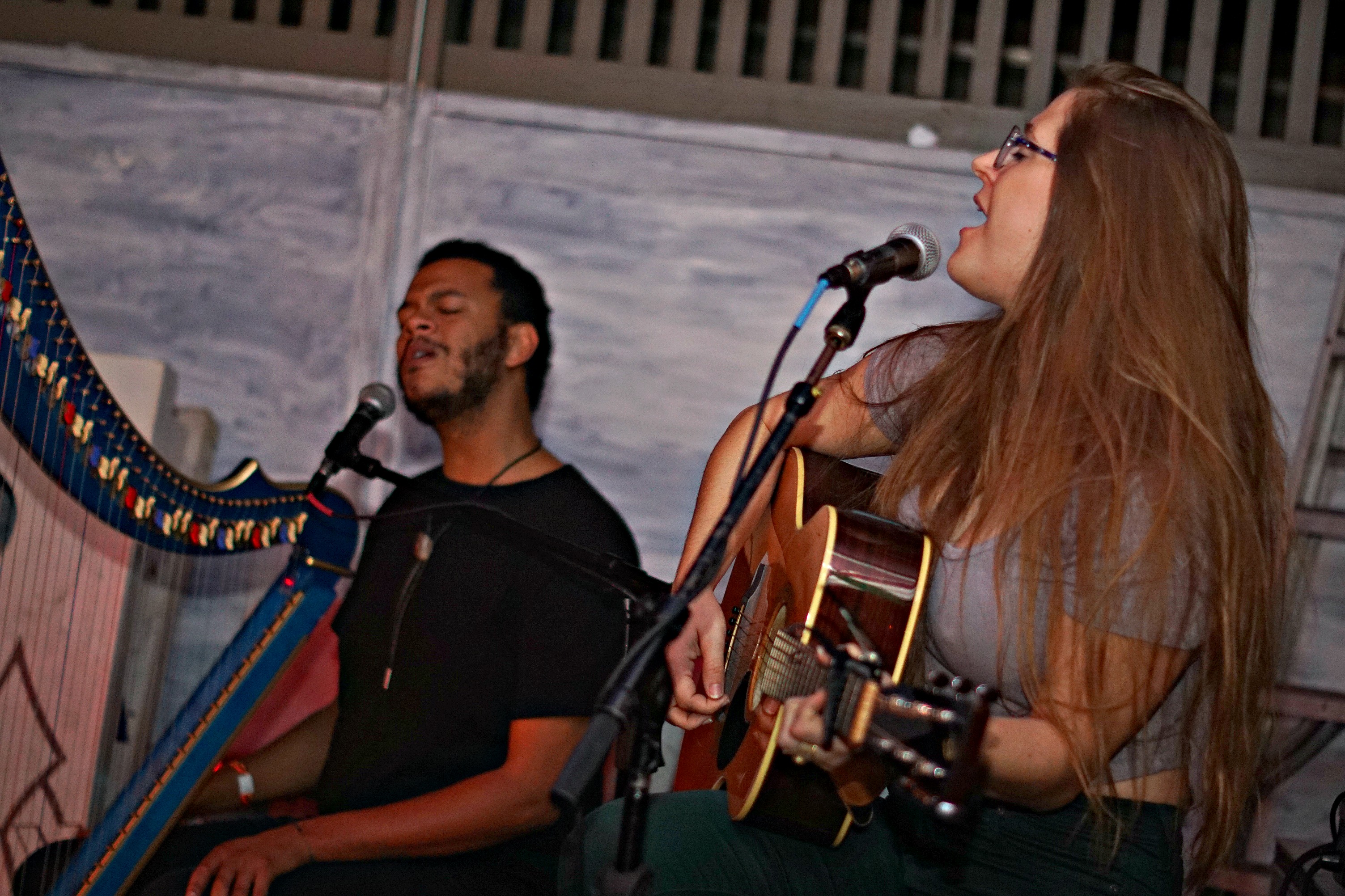 Can you imagine what it must have felt like for anyone having a Sunday stroll downtown, and then suddenly they hear a harp going to town echoing from the alleys near 9th and Mass? Can you imagine? Bluegrass, folk, sure. That’s a familiar sound. But this was possibly the sound you hear when you die and go to heaven, and we have Calvin Arsenia’s innovative Replay patio set to thank.

In the last year, we’ve become familiar with a few harpists in Kansas City. But rarely do they think outside the box like Calvin Arsenia. Calvin will create as many loops as necessary, wether it be with his harp or his vocals, to convey the sound he wants. We weren’t kidding when we said Calvin went to town on that thing… It’s not like he was just plucking away softly. The gentle-voiced crooner’s songs would crescendo to something more like the metal solo of harps.

Additionally, the multi-instrumentalist (he just learned banjo and already performed songs he just wrote with the instrument) usually debuts popular covers during his sets (remember “Maps?”). Because of his unique approach to arranging these numbers, his covers tend to set really well with his audience. We normally scoff at covers, so they have to really pack a punch to be worthy of stage time (something Calvin does continuously during his performances)

Note: Ad reps in Kansas City would be stupid to not utilize Calvin’s song he wrote about the region in some sort of tourism-touting campaign.

Jessica Paige, who opened up the show and calls Calvin her “work husband,” is also known to rally audiences with her covers. It was her Sia cover that landed her on American Idol, and her “Cover Me Mondays” events have made her an internet sensation in Kansas City.

The thing about Jessica Paige is, she is so damn likable we have to punch ourselves in the face to get back off that happy cloud every time she’s in the room. Everything she does is likable– her songs, her onstage banter, even when something technically goes awry, the crowd is hanging on her every word. She’ll just keep carrying on the conversation like you’ve been lifelong friends, and that’s something artists strive to achieve… that natural camaraderie with the audience.

But what’s always most impressive is her talent. A lot of singer songwriters can prop themselves up on a stool and sing their life stories for you. But Jessica draws you in and takes you along for the ride (sometimes with little more than two chords). Considering her ability to move seamlessly between falsettos and belting one out, as well as her ability to charm a crowd, there’s no reason Jessica Paige can’t be this country’s next pop superstar.

The real moment to absolutely die for came at the end of their set, when the audience demanded an encore. With the downtown crowd fizzling out, the duo joined together on harp and guitar and played to their heart’s content. The song that gave everyone chills was their rendition of “Hallelujah,” which solidified that Calvin Arsenia and Jessica Paige are a match made in musical heaven.

Calvin Arsenia is in the midst of planning a show-stopping release show for his upcoming album, Catastrophe. It’ll take place on Tuesday, November 15th, at recordBar in Kansas City. You can RSVP here. Word on the street is Jessica Paige will be joining him for the event, and made an appearance on the album.

Lucas Parker is the James Brown of guitar