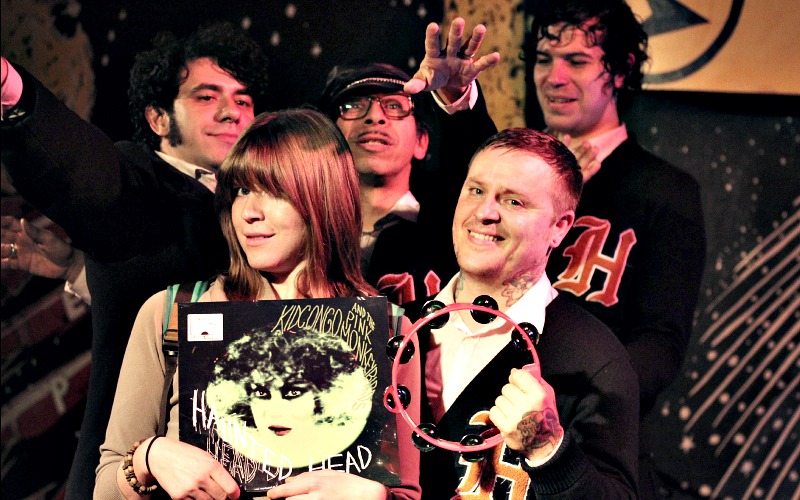 You could call Ron Miller the busiest musician in Lawrence. Spewing a fountain of endless ideas and talents, the Up the Academy frontman and drummer for Kid Congo has an eye for activity and a fetish for full plates. That’s why in the midst or organizing shows, helping bands record albums in his home studio, and running a tattoo business, he’s throwing what will surely be one of the wildest shows of the season when Kid Congo plays the Taproom on Saturday. 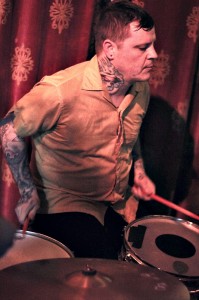 After bouncing around Austin and Chicago, Ron found himself on Kid Congo’s good side. “I just ran into him by accident in Chicago at a music festival, and he asked me if I was still playing music,” says Ron. At that moment in time, he had actually quit playing music, but the band convinced him to hop on. “It sounded fun. We talked about it again and sort of decided to do it.” Ron went out on tour with them, and before he knew it the band was over at his home in Harveyville (near Topeka), recording their next album. “We recorded Dracula Boots out at my house using an eight track reel-to-reel, and that’s still what we use,” says Ron, who has a distaste for modern technology and an adoration for vintage recording equipment. “I like the analog process, but also I think it sounds better. I just know how to use that thing, and I’m not super technically savvy with the digital age. But they’re great little machines, and they’ve got a following now.”

Ron’s home studio has a following now as well. The renovated school has seen several bands come through to record, including Psychic Heat just recently. The home serves as more than just a studio and a home for Ron. “It’s called The Harveyville Project. We’ve been out there for about nine years, and it’s a creative retreat for writers and artists,” says Ron. “We host workshops and we do occasionally have artists in residence. But it’s mainly a place where people can go and work on their respective projects and be left alone, eat good food. Seclusion at our lair.” 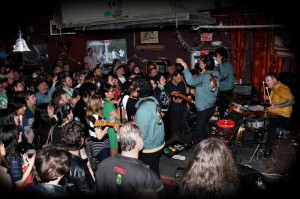 Ron doesn’t just lend his talents to artists and musicians in Kansas. He spent several years organizing SXSW showcases, which can be a difficult and daunting task. His most recent SXSW event was an outlandish party for Kid Congo’s 55th birthday at the Longbranch Inn, a venue he likes to work with regularly in Austin. “It’s a great little space, and I wanted to do something there because I liked the location and I wanted to work with my friends,” Ron admits. He realizes how utterly frustrating working a festival of that size can become, and how important it can be to break away from the bigger events and find your groove. “I could see how people don’t have a good time at SXSW anymore because it’s really hard to have an easygoing fun experience. It’s too big, it’s too crazy. So I was really interested in doing something that might be a little more laid back, and I feel like that’s what we pulled off there.” 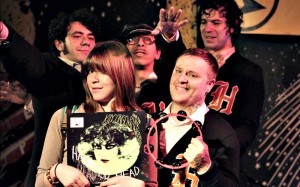 Something Worth A Damn

Despite the amount of work that goes into throwing exhilarating live shows, touring several months out of the year, and working at his tattoo studio in Lawrence, Ron can’t really find a reason to slow down. The gears in his head are going full speed ahead, and channeling that energy into useful projects is what keeps him from going off the rails. “I want to do something worth a damn before I die. I’m sure a lot of people feel that way. That’s sort of how I go through every day,” Ron confided.”More than anything, I just don’t want to look back and do the things I loved to do as much as possible. You’ve just go to do that shit until the wheels fall off.”

Come see just what Ron is capable of putting together when Kid Congo and the Pink Monkey Birds, Dikes of Holland, and the Conquerors play the Taproom on Saturday, May 10th.