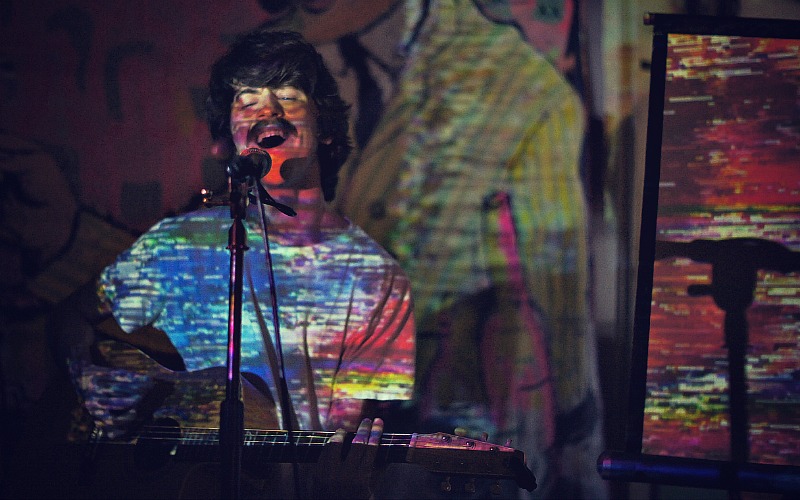 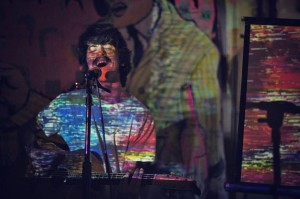 Inside Brian Kupillas is a swirling storm of extremes. On one end of his musical spectrum in Wandering Lake, he is a gentle guitar-plucking folk crooner. On the other end, he is an experimental wizard.

Under dim lights and dizzying projections, Kupillas might rattle around kitchen utensils or take a screwdriver to his guitar string, then send those noises down a whirlwind of unexpected twists and turns through his pedals. If it’s in your utility closet or junk drawer, he can likely make music with it.

Before this delightful Love Garden performance, the dynamic musician previously spent time playing with SW/MM/NG before finally making the move to Lawrence. In all honesty, a musician of that nature belongs here. That might be one of the reasons the Whatever Forever family welcomed him with open arms into the label and started including him on all their endeavors. He’s been spotted jumping in on guitar with CS Luxem and occasionally hopping on Whatever Forever lineups. But rather than releasing a cassette– a staple of bands on the Whatever Forever label– he released a zine.

Right before diving into his final song at Love Garden on Friday evening, he announced that it “requires some setup and may seem a little unorthodox.” It seems everything Wandering Lake does is a little unorthodox, and if we’re lucky, he won’t change a thing.

UltraVivid has more synths than you