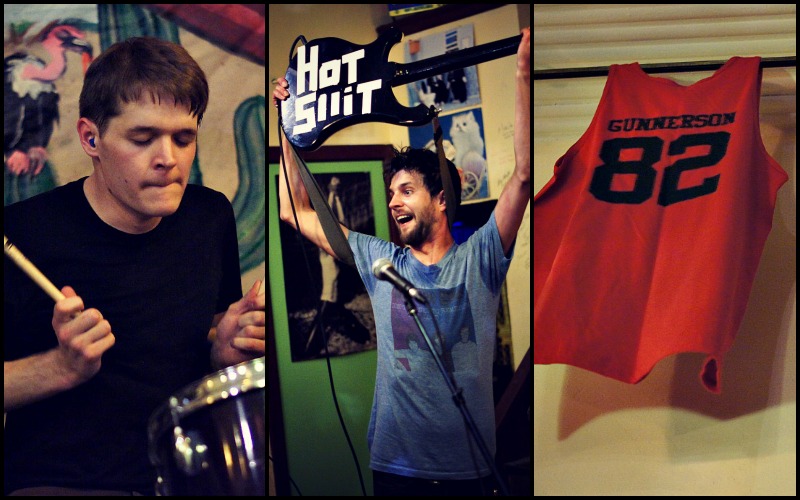 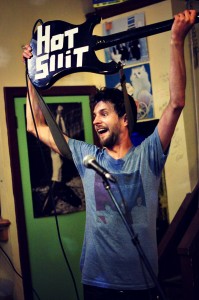 To know a Gunnerson brother is to know live music in this town.

In fact, one of the best things to every happen to local music in Lawrence was the day the brothers migrated up here from Pratt, Kansas. Since then, Sam and Will have offered their unconditional support for their fellow musicians. They show up to as many shows as possible consistently every week, they work at the venues, they yell “HOT SHIT!” from the front row (that one is mostly Sam). It’s safe to say that at least every band has felt some sort of love from these two. If they think something is great, they let the creator know. There are no social prejudices holding these two back.

Then, there’s the band. No, we’re not talking about Horse Weapons (although, that was a pretty sweet gig). We’re talking about one nonsensical word that will immediately perk up the ears of any scenester in Lawrence: JabberJosh.

I, along with several other staffers at I Heart Local Music, have used an array of words to describe JabberJosh: Rugged, gut-wrenching, raw talent, pure audible power, crass, rude, and (our personal favorite from writer Nathan Cardiff), “JabberJosh totally fucking rules.” 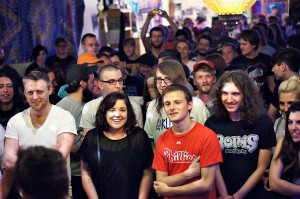 But no matter how gruff they appear on stage while powering through their unique and sludgy brand of bass rock, the fact of the matter is that they are loved. Will and Sam are just as inseparable as Lawrence and JabberJosh are… but the times they are a changin’.

After countless years in Lawrence, Will is moving. With the date fast approaching, the band decided to go out in a manner that leaves the door open for everyone. Rather than playing a 21+ venue, they threw themselves a going away shindig at Love Garden so that every man, woman, child, and even dog could attend (for free). If your hearing survived Muscle Worship’s opening set, then you were rewarded with an unforgettable night from JabberJosh.

Now remember, the two are brothers first, musicians second, and comedians third. Sam even spent time in New York studying standup comedy (he’s quite good at bringing laughter to the people). So instead of calling it a farewell show, they dubbed the event a “retirement party.” To celebrate all things retirement, they hauled in two television sets (the kind with the DVD players built in… like, where do you even GET those things anymore?) and set up one on each side of the stage area. On one television, they played Grumpy Old Men. On the other, they played Grumpier Old Men. 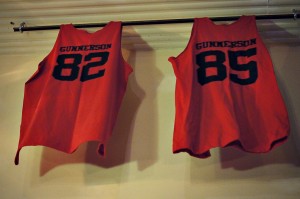 Love Garden also “retired” the Gunnersons’ jerseys up high (the numbers mark their birth years). Halfway through the set, they handed out a tub of “old man candy” consisting of circus peanuts, cherry mash, and Werther’s Originals. As they sacrificed the tub of candy to the overwhelming audience, Sam (in a heartwarming reminder that he is a small town Kansas boy) proclaimed “Just make sure that tupperware gets back to us or our Mom is going to be pissed!”

As is customary at JabberJosh events, they fed the audience. A pizza delivery arrived at the start of the show, and the slices disappeared in the blink of an eye. 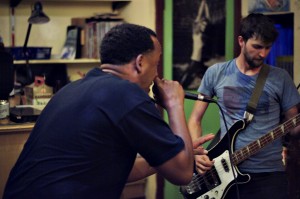 Also customary at JabberJosh concerts: cameos. We’re quite fond of one of their previous collaborations with BaioWolf where they covered Limp Bizkit. On this night, the cameo was reserved for a special guest who is as well loved by the local music community as the brothers themselves. The crowd was already cheering when Approach walked up to the mic. Years ago, Approach used to collaborate with JabberJosh in a project titled “Swanson.” On this night, however, they covered a Rage Against the Machine number.

The entire event threw the middle finger to curfews. Even when the brothers Gunnerson considered ending the set, their dedicated fans (as well as the owner of Love Garden) encouraged them to continue several times. Though the pleas for “one more song” had a joyful tone, there was a slight feeling of “Please don’t go.”

Farewell isn’t forever, though. Several cracks and jabs were made about their possible “Coming Out of Retirement” show. And while Will may be off to Wisconsin, Sam will still be slaying audiences via Gnarly Davidson.

But if you really miss the ever-punny JabberJosh, a quick search on I Heart Local Music will quench your thirst and show just how instrumental and supportive they’ve been to local musicians in Lawrence.