JabberJosh is the musical equivalent of running the 40 yard dash

The population of Lawrence, Kansas, is quickly growing. Hordes of people are flocking towards the blue beacon of light, engulfed in a red state. Familiar faces will be outweighed by the masses of secondhand strangers who will grace this town with their presence for a few short days. Graduation weekend, an overwhelming event that leaves downtown Lawrence swollen with activity. Good or bad, the bars flood with soon-to-be graduates and their relatives, providing an interesting and unpredictable canvas for Lawrence culture to be spread upon.

Whether or not the Replay strategically placed the second annual Spring into Summer Festival on the most overly populated weekend of the season, it proved to be a great day for live Lawrence music. So many great bands played inside and outside of the Replay all day. However, due to a day job, I did not get to enjoy too many of those acts. I did make it just in time to experience some serious fun. JabberJosh is quickly becoming a Lawrence staple that is proud to show all the out of towners just how incredible the residents of Lawrence Fucking Kansas are. For the weekend, JabberJosh is my beacon of light, guiding me through the sea of graduation weekend.

As I wandered up to the Replay, I was thrown off by the huge stage constructed on 10th street, just East of Mass St. The music outside was just wrapping up. I got the privilege of catching a bit of the Hearts of Darkness set. HoD was nearly the exact opposite from what I was about to witness. There were countless musicians onstage, most likely in the double digits… JabberJosh is a two piece. Regardless of having just two members, Jabber Josh might be louder than any band that played all day. 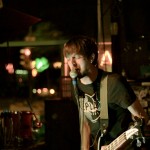 I don’t know how exactly to describe JabberJosh other than a mixture of comedic relief, raw talent, and pure audible power. The Gunnerson brothers could give Bill Nye a lesson or two in chemistry. You could not write better characters for a two-piece fuzz punk band, if that is even how you describe the genre of music JabberJosh plays. Sam, bass player and stand up comedian, provides the voice of the band. I did not know one man could make so much noise. With a bass cabinet nearly as tall as himself, Sam launches a dirty, fuzz filled low end, re-emphasized by his screaming vocals. As intense as Sam’s performance may be, the on-stage demeanor changes drastically in-between songs. His onstage banter is matched only by the silent smile of his brother. Will is one of the most ferocious drummers I have ever seen play, yet he is one of the most polite people I have ever met. This gentle giant of a musician could not harm anything, aside from his drums. With a constant smile on his face, Will compliments his brother’s energy perfectly. 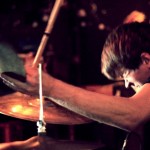 So different, yet so similar, the Gunnerson brothers high five one another immediately after sprinting through another song. Playing in JabberJosh is the musical equivalent of running the 40 yard dash. Without rest, Sam breaks up the set by introducing “joke” songs. Well, some would consider them jokes. I prefer “homage.” “Does anyone know what time it is?” asked Sam. One ecstatic audience member exclaimed, “Tool Time!” As if he were watching the Jeopardy rerun with his friends, conveniently forgetting to inform them that he had caught the same episode earlier that day. JabberJosh then broke out into the dirtiest version of the Tool Time theme song, from the mid 1990s sitcom “Home Improvement.” To top it all off, Sam grabbed a vibraslap that was sitting behind him, and then explained that the instrument makes the same sound as Tim Allen’s laugh.

Giving the audience just enough time to catch up with the humor, they exploded into another song. Even the songs have clever, quirky titles. Songs like, “Sticking together is what good waffles do” and “Why the fuck would you reissue Frampton comes alive?” remind the audience of just how much fun these dudes have playing music, as the visual wasn’t enough. Will pounds away, blurring into some sort of percussive monster as Sam bounces around, usually resorting back to one of the best power stances any of us have seen in a long time. JabberJosh’s combination of energy, talent, and wit makes this band a Lawrence treasure.
Near the end of the set, Sam got out the infamous birthday list. At every JabberJosh show, Sam reads out famous birthdays for the date they are playing (yes, every show). It is quickly becoming a well-loved tradition among the local crowd and I can only imagine the appreciation it receives on tour.

I hope that one day JabberJosh receives more exposure in far away towns. They make all other Lawrence bands proud to say, “that band is from the same town as us.” Nights like the Saturday before graduation are almost like playing out of town. There are so many unfamiliar faces, but the pressure is eased by knowing that no matter what, you are home. This too shall pass. Often frustrating, the crowds can either enhance or diminish the effectiveness of a set, unless JabberJosh is playing. Ultimately, Jabber Josh plays as if they are always home. Playing music is where these two brothers belong. Their love for playing radiates from any stage, cutting through the cold, dark bar scene, littered with hecklers and the uninterested drunks, making anyone who loves music as much as they do feel a little less out of place.

Previous Article Working towards a common good: Interior Sea to perform at the Replay