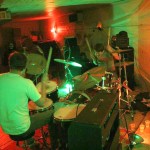 Here in Kansas, we’ve got a lot of well-mannered, dusty-haired boys who come from good families and rural landscapes. Will Gunnerson is one of them. But make no mistake, the second he gets behind a drum set onstage, he’s an absolute animal.

On Friday, Lawrence will feel Will’s wicked wrath when Horse Weapons opens for William Elliott Whitmore at the Granada. Gunnerson and his brother Sam make up half of the local rock act (Jackson Graham and Dan Davis make up the other). The bond between the four of them has been strong for several years, and Gunnerson repeatedly refers to them as “four dudes.” “We’ve known each other for a long time, at least ten years,” says Gunnerson. “We’ve all played shows with each other’s bands, and never really played altogether until now.”

The Gunnerson brothers have built up a brutal reputation in the area, and have consistently provided locals with some of the fiercest rock around. In addition to playing in Horse Weapons, they keep busy in JabberJosh. When he has a moment, Will also plays with Swanson.

But no matter the project, he keeps it ferocious onstage. So when patrons head out to the Granada on Friday, they’ll have to survive a dose of malicious rock before they get to the folk acts in the rest of the lineup. “We’ll be the loudest band on the bill,” jokes Gunnerson. “Just four dudes having a good time. Bring some earplugs for that.”

Just The Two Of Us

While the Gunnersons will be rocking out onstage, their parents will be watching from the crowd. There’s no doubt that his family keeps it tight, and Will says having the opportunity to consistently play with his brother is “awesome,” to say the least. “We’ve always loved playing music together,” says Gunnerson. “It’s cool to be involved with three different things. We play different in every band. We have the one band where it’s just the two of us where we can get pretty weird, but the other ones we have a particular role as the rhythm section.”

Gunnerson says he’ll continue to stretch his wings with various projects, and play as long as he physically can. “I still feel good enough that things I want to do, always wanted to do, playing music… I don’t want to lose it,” says Gunnerson. “It would seem crazy to stop. It’ll be fun to have stuff to look back on that I’m really proud of. If anybody’s interested, I’m flattered. But I kind of just want to do all this while we’re young and have the energy.”

See that energy (and, according to Will, pack up your earplugs) when you head down to the Granada on Friday for William Elliott Whitmore, Drakkar Sauna, Me For Radness, and Horse Weapons.