Listening to CS Luxem is like taking a mesmerizing trip down the rabbit hole. There are intricate and tricky twists and turns to navigate, and you may not come out the same person. 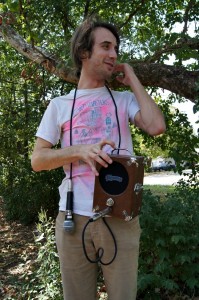 The local experimental musician has been providing the soundtrack to most of Lawrence’s exhausting and hypnotic summer, so it’s no wonder that we’ll end the summer with him and a host of other entrancing performers this Friday at the Fresh Produce collective show in the East Lawrence Arts District.

Despite a heavily detailed and spellbinding set of songs, Chris Luxem doesn’t need much to create the captivating sound. He’ll generally stand or crouch in front of little more than a couple of machines to create his vocal and guitar loops. His goal is to see how audiences will respond to the unique music. “I’ve always been really interested in sound and the communication, the physical effect. That’s more of a cerebral connection than a force of vibration,” says Luxem, who noted his effort to mix his interests in soul music and psychedelia together. “There’s a nice freedom involved with the C.S. Luxem project that I’m still kind of indulging in. It seems to be a nice amount of momentum behind it than when I was doing more of a folk act. It’s kind of a nice hybrid.” 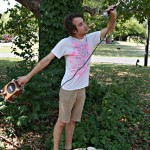 On Friday he’ll be joined by the likes of other hard-working independent artists with a flair for the extraordinary and unfamiliar, like Blakey Bear, Carey Scott, and Agent X-12. Most of these unorthodox performers call the Whatever Forever label home and have been associated with the Pizza Power collective in the past. They, along with Luxem, were born out of the DIY generation, which means they’re heavy on supporting (rather than competing) with each other. “It’s always hard for me to fully communicate it, but one of the reasons I really do like Lawrence, Kansas City, even Topeka and Manhattan, are just the people that I’ve known in those places. I feel like there’s a nice amount of interest and support,” says Luxem. “I feel as though they’re all open to the idea of collaborating more so than being in competition… even though lots of times we do have shows and events that are on the same night. But there seems to be a nice amount of kids bouncing around. The kids in charge of those things even try to partake in other events. That’s what I like about Lawrence lately.” 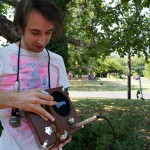 That sort of collaboration and friendly camaraderie is key. Luxem just returned from a tour that landed him in areas reaching from New York to Ohio, but there’s a reason he calls Larryville home. “In all these places, I was with friends and I had a nice community of places to play with, so when I come back to Lawrence I feel like there’s a nice community here that I want to return to,” says Luxem. “The CS Luxem project, I feel right now at least, is giving me the form of expression that I want. But being involved in other groups then allows for me to tap into the other elements of my personality that want to be explored. I think all of these things are important for people to look within themselves.”

If nothing else, Luxem says this venture is a chance to not only connect with the outside world, but show them a feeling of acceptance. “I want to show other people what it’s like to be weird like me,” he says with a chuckle. “Other weirdos that are exploring… I want to show that it’s pretty fun to explore and that they should explore too, if they want.”

Go exploring with CS Luxem when he plays at SeedCo Studios, 826 Pennsylvania, on Friday evening at 6:00 as part of Final Fridays in Lawrence. Also, look for a new tape from Luxem coming out on Whatever Forever soon.