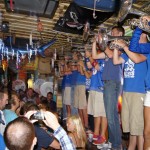 Now that KU Football season is up and running, here’s a sight you might see often in Downtown Lawrence.

On game-day weekends, The KU Bar Band will march down Mass Street, playing as loud as they possibly can in order to turn heads. The march ends with a fantastic party at the Sandbar, where the band perches themselves up high and plays to a lively and upbeat crowd. Fans will surround the drummers on the ground floor and dance about, while the horns blare from up above. 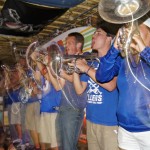 The tradition started more than 15 years ago, and has grown tremendously since that time. The players light up everyone’s night, and they leave a trail of smiles behind them wherever they go. While they’re not officially affiliated with KU, you can just consider them extremely dedicated fans.

Next post Photo Gallery: Spirit is the Spirit / Believers / The Empty Spaces