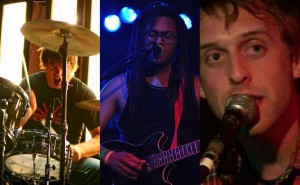 Don’t be surprised if you find that you can’t get into a Lawrence venue this weekend. Downtown is known as party central the weekend surrounding Halloween, and most clubs will be implementing the “one in, one out” policy. You may have to think carefully about which shows you want to go to, and show up early. Here’s a guide to help you along your journey:

The yearly fashion show will feature sexy zombies, models and scenesters dressed to the nines on the runway. Put on your Sunday best and head down to the Replay to see what the kids will be sporting this year. Proceeds from the fashion show benefit the Social Service League and LINK.

After the fashion extravaganza, head inside for a night of noisy rock with Kansas City band The Pink Socks and Lawrence-based My Brother the Vulture.

If you’re still in the mood for noise, the always-reliable Mouthbreathers will be bringing the ruckus to the Jackpot. They’ll be joined by fellow noise-makers C V L T S, who just finished up a summer European tour not too long ago.

L.A.-based rockers BLEACHED are headlining the show. Expect upbeat (yet at the same time adorable) garage tunes and long flocks of flowing blond hair from this sisterly duo. They come bearing brownie points from CMJ.

Ghosty / The Grooks – The Taproom

For those of you who tend to hate how Lawrence erupts in party madness on Halloween weekend, please retreat to the Taproom basement to catch Ghosty and The Grooks. Expect Andrew Connor’s crooning voice and beautiful guitar playing, along with some of Lawrence’s longtime music lovers who are just looking for a place to chill.

Last but not least this Friday night, two of Lawrence’s most popular bands will be teaming up for a night of indie rock heaven at the Granada.

Quiet Corral tends to fill every Lawrence venue. Nobody knows how they do it, but no matter where they play you can expect to find fans darn near spilling out into the street. The band exemplifies musicianship in its finest form, so expect solid performances.

Cowboy Indian Bear have reason to be in high spirits. They’re set to open for Florence + the Machine in December, but first we get to have them all to ourselves.

See some of the new songs they’ve been writing for their upcoming record. Don’t be surprised if you find yourself melting when the adorable band starts to ooze with charm and captivate you with their solid songwriting.

The Spook Lights / The Boxknifes / Dry Bonnet – The Replay

If there’s one time of year you SHOULD see The Spook Lights, it’s on Halloween. Nowhere else will you find a local band willing to dress up, scream their guts out and flail about the stage. Expect some serious danceable music, costumes and sassy performers at their best.

Local garage rockers Dry Bonnet are making a name for themselves as one of Lawrence’s loudest bands. They’ve been racking up a solid reign of shows and should not be ignored.

Up The Academy / Ponyboy / The Sluts – The Jackpot

Speaking of loud garage rock, The Jackpot will once again be home to a night of noise as local ear-splitters Up The Academy headline the show. Ponyboy will also be on the bill this night, and will bring their gut-wrenching and emotional lyrics along.

Come early for The Sluts and yearn for the days of grunge. Lawrence’s newest band is easy to fall in love with, and may very well knock you off your feet with their incredible songwriting. It’s hard to believe they’re new to the scene, but they will no doubt fit right in.

I Heart Local Music gives The Sluts a perfect 10.

Call it a night of reunions. Ultimate Fakebook generally reunite for just one show a year and tend to bring enormous crowds filled with fans who follow the band from across the nation.