FacebookTweetLinkedInPin
Ultimate Fakebook limits their live shows to once a year. So when they get together for a performance, they go big. Really big. As in bright lights, fog machines and rowdiness on every level.

The Saturday before Halloween, they’ll be headlining (and opening) the 80’s-themed Revenge of the Nerds Halloween Ball. The event features a host of local bands, a costume contest, air guitar performances and a couple of surprise celebrity appearances. But before all the tricks comes a treat for the fans who show up early. Ultimate Fakebook will be opening up the night with an acoustic performance. “We will play none of the songs that we’ll play at the end of the night,” says drummer Eric Melin. “We’re going to try and do some new and crazy shit.”

Melin isn’t kidding. Over the past several years he’s built a name for himself in the air guitar industry, and on Saturday, October 29, he’ll be bringing along some of those friends. “We’re going to have air guitar performances with Kansas City’s best air guitarists format he regional championship,” says Melin. “We’ve got local celebrity air guitarists, and they’re all going to be there.” You can expect performers with names like “Stiff Dickens” and “Pork Sword” to air rock you between bands. “I’m excited about the level of talent the Kansas City air guitarists will be bringing to the show,” says Melin.

Reunited and it feels so good

The Halloween Ball will be ultimately gratuitous for those who enjoy being knee-deep in nostalgia. Local bands, such as The Touchdowns and Ultimate Fakebook, will be reuniting for the show. This will be the third yearly reunion show for Ultimate Fakebook. “We’ve done a couple of reunion shows the last two years, this one fell on Halloween,” says Melin. “It just kind of became this big thing and we were like ‘Fuck, man. It’s Halloween. Let’s do it. Let’s put together the Halloween show we’ve always wanted to see.'”

Ultimate Fakebook reunion shows are not to be ignored. The band draws fans from far and wide. Melin says rock and roll weddings aren’t uncommon at their shows; and the fans stay dedicated, even more than a decade later. “We didn’t have a radio hit, but we have a lot of fans,” says Melin. “When they come, they sing along. There’s no separation because when we’re out in a crowd, we like to sing and play air guitar and do the same stuff.” 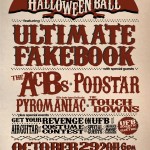 Crowd participation at Ultimate Fakebook shows is a must. Because they play just one show a year, you can expect the band to pull out all the stops and gear up for some antics. Some fans should get ready for a little audience participation. “Of course we’re going to have the rock box,” says Melin. The rock box is a machine that the band stands on while smoke comes out of it. The controller goes to a lucky fan in the front row. “We did this shit at indie rock shows and American Legion halls when they would just shun the whole idea of rock and roll being ridiculous and over the top. We would just shove it in their faces. That’s what we became known for.”

To see Ultimate Fakebook along with several local bands outdo themselves this year, head to the Bottleneck on Saturday, October 29.