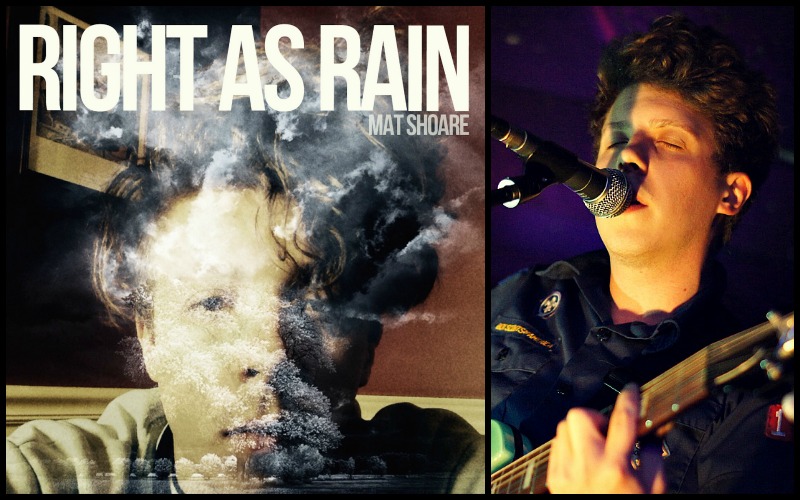 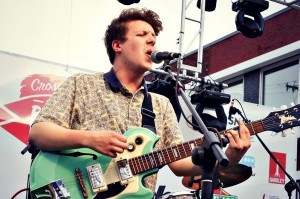 I’m gonna do a little self-referencing here, so please forgive me. The first review I wrote for this site was Mat Shoare’s Domestic Partnership, back in late 2012 (I get a little nostalgic thinking about it). I revisited that review in preparation for his follow-up LP Right As Rain (mostly to avoid repeating myself and doing a quick comparison of the albums), but I saw the last line of my review which reads, “Shoare’s words can cut like a knife, but he seems to be the one that helps dress the wound” and (self-promotion aside) I think it is incredibly appropriate that his opener on Right As Rain is titled “Murder.”

Shoare pledges that “you should feel lucky that I can play guitar/Cause if I couldn’t, I’d run you over with my car.” Holy shit. The heavy buzz and crunch of “Murder” is matched by the cruelty of the lyrics; Shoare meditates and ponders this alternate hobby and thankfully for us, he’s chosen music instead (since he’s so damn good at it). The song is tongue-in-cheek (of course) and Shoare’s brand of humor eases off the dark material, but unlike Domestic Partnership it’s tough to peg whether or not Shoare will heal what he’s done. The harsh track doesn’t offer much of an apology and sets the tone for the eclectic journey through Right As Rain. 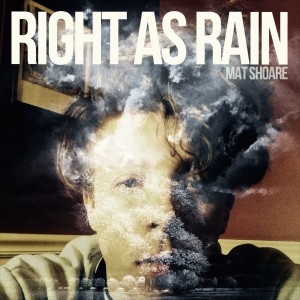 “In Good Time” is a groovy, dancey piece of pop bliss. It’s extended intro will have you moving immediately. When the vocals come in, so does Shoare’s emotional delivery (“I don’t think you’re so special/No I don’t”) giving you an inner conflict; should we be enjoying such a brutal song? Of course. Shoare’s talents are all at the top of their game here. “Give Me Another Day” grabs a melancholic beat and subtle keys for its despair. “It isn’t lying if you never tell your friends” he sings. Mark that down as one of the best lyrics of the year, please. Shoare keeps his snark on the fun (dare I say almost goofball?) “Friends.” His surf-pop delivery (which he mastered with The Empty Spaces) lets him croon lines like “It sucks being cooler than someone you love” and you grin only because if you’re the one hearing that sentiment, it’s devastating. Shoare takes the old cliche of ‘with friends like these who needs enemies’ and twists it into his own words (“I’ve got friends better than you, that try to kill me/Burn my house down/That steal my money”). It’s funny in the most disturbing way. 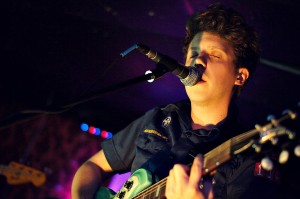 The cruelty (there’s that word again) on “Bad Guy” brings us to the second half of the record, which slows the pace a little. Here’s accepting yourself for who you are and asking why your partner never saw it themselves. The simple strum of the guitar gives the track an even more heartbreaking tone than the lyrics. Immediately afterwards, the humming keys on “Nothing Like You” lets Shoare belt his ballad. An appropriate follow-up to “Bad Guy,” because you wonder if this is our same narrator and are we going to fall for this again? Shoare’s romantic delivery suggests yes (and how could you help yourself?). He interjects a few ambient moments in the mix to let us drift off cloud nine, but we’ll float back to his voice as if a magnet is pulling us. 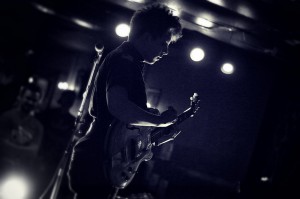 The cool and quiet “Excuses Excuses” builds slowly in its seduction and with an interlude following it (the less than a minute “Incidental”), gives the track an environment all its own. “Excuses Excuses” really puts the rest of the record into perspective too; all of the tracks take their time. They don’t rush to verses or choruses and just let us enjoy the space surrounding them. Then we get to closer “All You Need Is Love” and this is where we wonder if Shoare is being completely tongue-in-cheek or unbelievably sincere. I mean, he started the record with a song called “Murder” for Chrissakes! But in this lies Mat Shoare’s brilliance. You can only sit and think who our narrator is; a brutal heartbreaker or the misunderstood lover? And Shoare’s delivery on the track makes it no easier. What starts as genuine affection then gets repeated and (maybe I’m listening too hard) there is just a hint of deviousness. Is this our wholehearted singer/songwriter or the devilish trickster we can’t stay away from? Right As Rain only has one sure conclusion; multiple listens and serious appreciation.

For a record that is performed and written as well as this, it is also produced and plotted out in a terrific manner. “All You Need Is Love” even ends with a sweet moment of Shoare speaking, “That’s fine. We’ll just… If we keep that, we’ll keep that” and then brings back the quiet strum and whistle. Dynamically diverse and frighteningly fantastic, Mat Shoare has given us a masterpiece.

Favorite Tracks: “Give Me Another Day,” “Excuses Excuses,” & “All You Need Is Love”

Editor’s note: The album comes out on Tuesday, May 5, but you can see Mat Shoare play the recordBar in Kansas City on Friday, May 1st.

Watch: Something and the Whatevers cover La Guerre