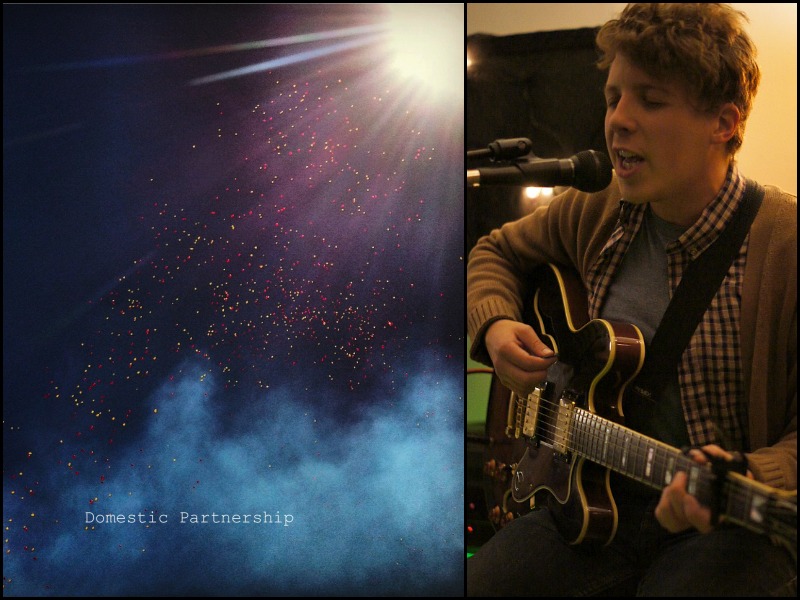 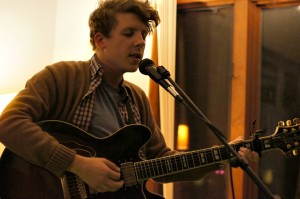 About a month ago, I was lucky enough to attend a house show featuring three Lawrence musicians and one from KC who I was vaguely familiar with; Kansas City artist Mat Shoare. I had been to a few Empty Spaces shows and had a great time at every venue they’ve played. The Empty Spaces do a great job blending garage and surf rock and keeping a poppy sensibility, all while staying genuine. Shoare’s lead vocals come out as a yelp in these shows, reminding me of Luke Lalonde of Born Ruffians (a friend of mine has also likened him to Jack White). It’s easy to dance in the crowd while Shoare sways on stage with his cohorts in the band. They are a fun band, no question. In that Lawrence living room on a quiet Friday night, there was no dancing though.

I found myself wedged uncomfortably against a staircase railing for the better part of 30 minutes, but refused to move because I didn’t want to miss a word he sang. Shoare played a few tracks from his release Domestic Partnership that night and what stuck out the most was the confidence in his voice and the melancholy in his lyrics. So, does his haunting live performance translate to the record? Absolutely.

Domestic Partnership focuses on minimal guitar and sparse lyrics that feel like a sucker-punch. His honesty catches you off guard at first listen; and while his lyrics are full of melancholy, there is a bitterness that I would not want to be on the receiving end of. He opens the record with “If you’re done wasting my time / I think I’ll take my turn to speak,” and speak he does. 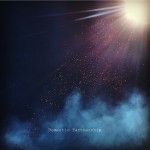 From there, the songs become a see-saw of emotions and Shoare is never shy to admit that he may not know any better than the listener: “I know we are older now / So why are we no wiser now?” he sings on “Building Houses.” He seems to strike with a brutal phrase and then turn his own words on himself. The record can feel cold and desolate at times and at others, dreamy and surreal.

There are a few catchy tracks for those looking for something similar to his Empty Spaces work (“Keeping Everyone Happy” and “Evolution”). Shoare’s vocal range is impressive; just listen to the “oohs” and “aahs” on the opening track and his howl towards the end of the title track. I can’t speak for Shoare’s influences, but its easy to hear the Pixies (“Patterns in the Sand”) and Radiohead (“Building Houses”) bleeding through.

The pressure of relationships and cruelty that someone can exhibit aren’t disguised with flowery language: “I hate you” he sings repeatedly in “Black Cow.” Shoare’s words can cut like a knife, but he seems to be the one that helps dress the wound.