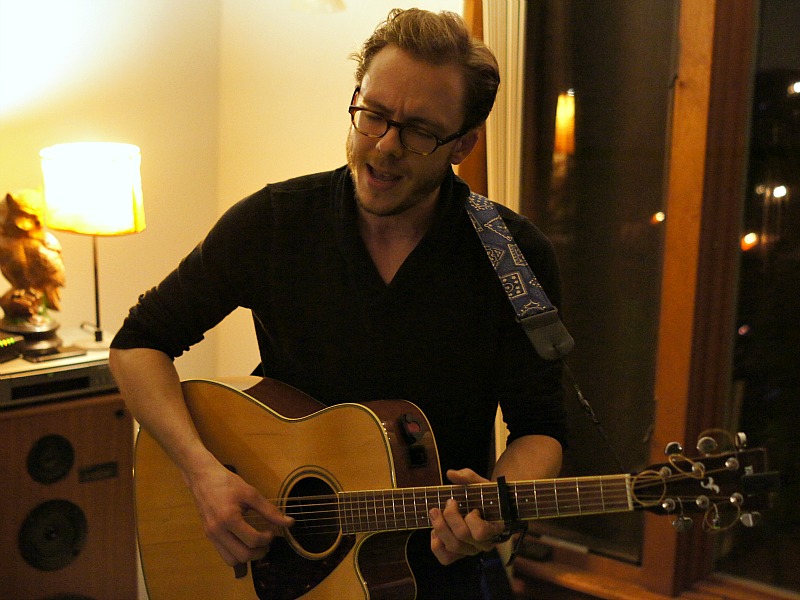 Normally when one thinks of house shows, a student-filled home with dusty floors, kegs, and scattered red plastic cups come to mind. This was not the case on Friday night, when a cozy East Lawrence bungalow opened its doors to the community for a night of majestic music from some of the scene’s best songwriters.

Four songsters decorated the bill. Mat Shoare (of The Empty Spaces), Katlyn Conroy (who endlessly lends her talents across the scene), Justin Klaas, and I Heart Local Music favorite Y(our) Fri(end) proudly played to an eager audience that seemed to be counting the days to the show featuring the impressive lineup.

Mat Shoare is a musician who has been catching our attention lately. Recently, he has been hitting the road with Everyday/Everynight and the Empty Spaces. While his work with the two indie rock outfits is more than impressive, we’re thrilled that he has some solo work coming out again. 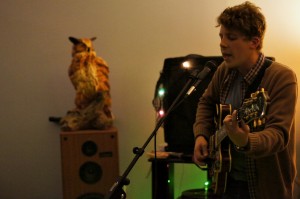 It was such a treat to watch Shoare and company in such an intimate setting. The audience packed into the beautiful and soft-lit home, scrunched up against its modern decor and perched upon eloquent furnishings. This sort of close proximity left some attendees feeling Shoare’s dramatic lyrics right in their guts. He would occasionally roll up onto his tippy-toes while seeping his scratchy vocals into the room. The enchanting performer’s music was equal parts heartwarming and heartbreaking.

Mat Shoare in Lawrence, Kansas from I Heart Local Music on Vimeo.

The house grew smaller as more scenesters arrived. While most folks were a bit cautious about going to a house show (after all, Lawrence has such a thriving downtown that it’s hard to find a reason to break from the norm), that guard was quickly lowered when the very personable performers got chummy with the audience. The musicians were magical when they took the mic, making everyone feel right at home with them and sharing endless laughs between songs. That camaraderie continued through Conroy’s set, and even those who took breaks outside couldn’t escape her angelic voice. She hit notes that were so high, they rang clear as a bell and turned heads.

The entire home had become so good-natured when Justin Klaas went up to perform. “Even though you’re all clapping, you’re kind of terrifying right now,” he joked when he saw how tightly adjacent the crowd had become. 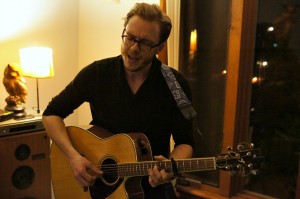 Klaas is an exquisite singer/songwriter who doesn’t make appearances in downtown venues too often, which is why many made the trek to this show to experience his superb talents. He was the only performer to go sans mic/amp, and it appeared he didn’t really need one anyway. He had such a splendid way of commanding the room, basking everyone in his powerful, crescendoing vocals. The circle of green Christmas lights that outlined the stage reflected in his glasses while he swayed and bounced behind his guitar. Even when he sang more serious (and sometimes somber) lyrics, he could crack jokes without ever missing a beat. A phone would ring and he would quip “That’s part of the song!” This was a man who was just so comfortable with performing, we couldn’t help but feel that he was made for serenading.

Justin Klaas in Lawrence, Kansas from I Heart Local Music on Vimeo.

The night rounded out with a rewarding set from Y(our) Fri(end), which featured a duet with Conroy for a Daniel Johnston cover. Nobody left this show early, it was good until the very last drop, and some could hardly believe the time had flown by so quickly.

Every now and then, it’s perfectly okay to feel frustrated with the music scene and seek another outlet. Sometimes, you just need to get out of downtown and enjoy each other’s intense company, conversation, and camaraderie off the beaten path.