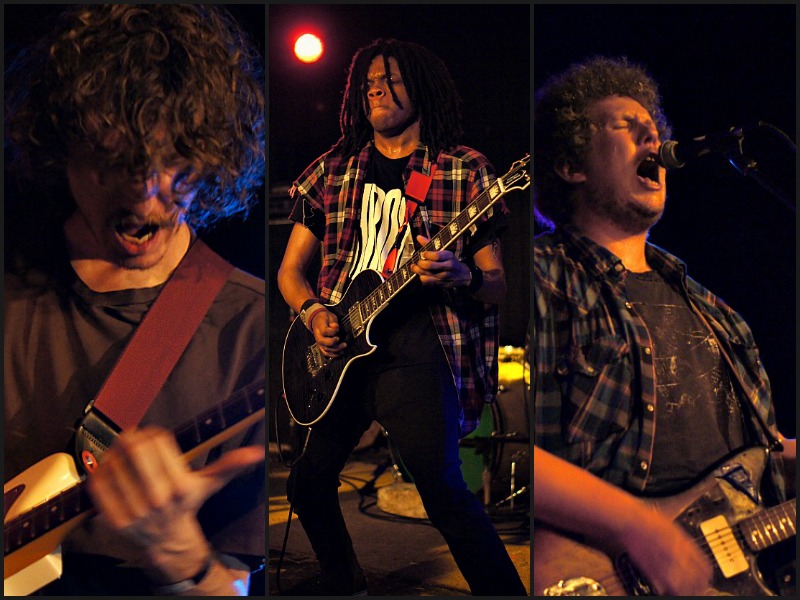 The second day of Lawrence Field Day Fest, a three-day extravaganza highlighting some of Lawrence’s loudest and most exciting acts, turned out to be a night of throwbacks, goodbyes, and transitions to the future. 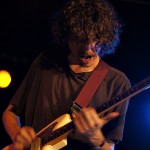 The night was exquisite and memorable from the very beginning, when Lawrence’s newest rockers Bad Kids To The Front took to the stage. The band is fronted by a young rocker the community has come to know and adore. Drew Smith has been working hard to make a presence in Lawrence, but it came on the heels of his departure. The talented teen moves out of state at the end of the summer, but first he hit the stage for a mind-bending set. 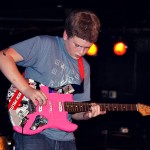 Bad Kids To The Front has been falling deeper and deeper into a psychedelic hole, and it’s starting to make us wonder if they’ll ever come back. The band stays true to their unpredictable reputation, never sounding the same each time they play. Just when you’re enjoying something rhythmic, half the band will jump on the drums all at once and throw you for a loop. The set ended with a cover of the first 30 minutes of The Flaming Lips’ 24-hour song. At the end of the exhausting maneuver, Smith exclaimed “Only at Field Day Fest!” and then gave a hearty wave before exiting the scene. 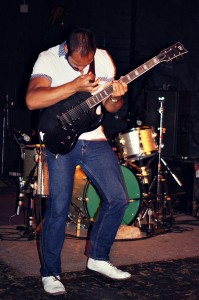 Before anyone had time to soak in what had just happened, Victor Polanco (the sole member of Going To Hell In A Leather Jacket) jumped into his set. In his signature shiny white shoes, Polanco started shooting out some of the best guitar skills this side of the Kaw into the air, finger tapping and shredding his way to glory. He did this while flailing all over the stage, his limbs and fingers flying.

This is the sort of musician who sounds like he locks himself in a room with a metronome set on the fastest setting all day every day. As a guitarist, he’s a madman and entertaining to watch. 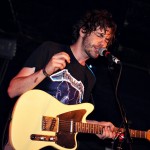 In what may be the earliest set they’ve ever seen, Lawrence’s JOCKS screamed and ripped apart the Bottleneck with a noise usually reserved for the Replay. This was a special night for JOCKS, a band that features musicians involved in several other local projects. Half of them would later go on to play the Replay that night with Dry Bonnet. This was also the final set for drummer Seth Wiese. 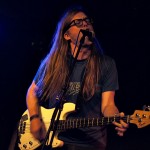 Halfway through their chatty and hilariously obnoxious set, two members of the band left the stage and Oscar Guinn joined Wiese and Zach Campbell, forming Rooftop Vigilantes. The set was a grand surprise, seeing as how the night before was supposedly Rooftop Vigilantes’ final set ever. So it was a real treat to see the band reunite one last time at the Bottleneck. The audience took notice, filled up, and soaked it in. 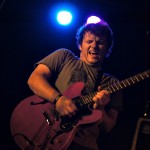 Local pop outfit Many Moods of Dad rocked the stage with equal parts jokes, new songs off their latest (and outstanding) album, and brief histories on each member of the band. Frontman Cameron Hawk, who is actually mostly responsible for Lawrence Field Day Fest, gave major props to his bandmates and those who played before him. 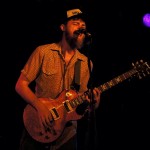 Then, they indulged the audience by recognizing their latest addition to the band, *Mitch Jones, and playing a song from Jones’ previous band, DoublePlus. 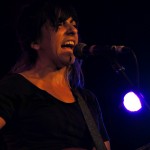 Nature Boys spent their time onstage screaming their effing heads off and scoring major points with the crowd. The band has been busy playing every venue and basement possible in Kansas City this summer, so it was nice to see them come up for a Lawrence show. This also may have been the biggest stage we’ve seen them on in Lawrence.

Schwervon has been making the rounds in Lawrence lately, and we’ve noticed that each time they play, the majority of the audience is watching them for the first time. This also means they’re gaining loads of new fans every time they play Lawrence. It’s easy to see why they win over new fans so quickly and easily, considering the perfect formula they’ve created in their live performance. The Kansas City duo has managed to come across as delightfully charming, while still maintaining their rock band sound at the same time. Our hope is that they will play Lawrence more often, now that their fan base is growing. 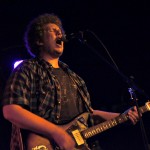 No one really started throwing their bodies around until Bloodbirds started playing. Their bloodthirsty fans were eager to move to the new songs, no matter the pace. Bloodbirds has to be one of the hardest working bands in Kansas City. They put out a record completely on their own, and it has been selling like hot cakes at record stores in Lawrence and Kansas City (they’ve had to restock the vinyl a couple of times). The Northeast Kansas scene can’t get enough of this hard rock band, and this has allowed Bloodbirds the freedom to truly experiment and spread their wings as artists. 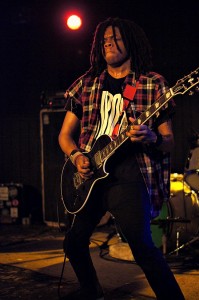 The vicious night ended with one of the greatest bands known to man: Radkey.

The trio of brothers are from St. Joseph, Missouri. But honestly, it feels like they have a home here in Lawrence. A year ago, they played Lawrence when no more than a handful of people were around to view their show. Now, they’re selling out venues, playing festivals, recording music (and selling it quite successfully)… all on two separate continents. The band is well-loved in England, and recently graced the pages of NME. 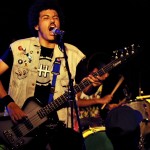 But when they’re not globe-trotting, hitting up shows in New York, or selling out of their record in London, they’re completely wrecking venues in Lawrence with their jaw-dropping performance that includes feisty riffs and a few acrobatics. There’s always room for a Radkey show here; and when they come to town, Lawrencians respond. This was the point in the night where fans truly thrashed and just destroyed each other. While Isaiah, Dee, and Solomon Radke jumped, shredded, and wailed onstage, the fans moshed on the floor. The brothers were just as aggressive as their fans. “Sol is gonna put this drumbeat in your ass, balls first!” bassist Isaiah warned. This only instigated their fans even more, and they responded with fist pumps, a few punches, and screams of joy. 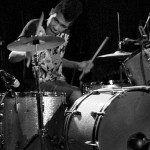 We’re very lucky to have Radkey so heartily available to us at the moment. This is a band that will (very soon) be sharing stages with some of the world’s most recognizable acts. So it’s good to know that they’ll always make time for the fans at home with a little “tough love.”

*Disclaimer: Mitch Jones is a photographer for I Heart Local Music.