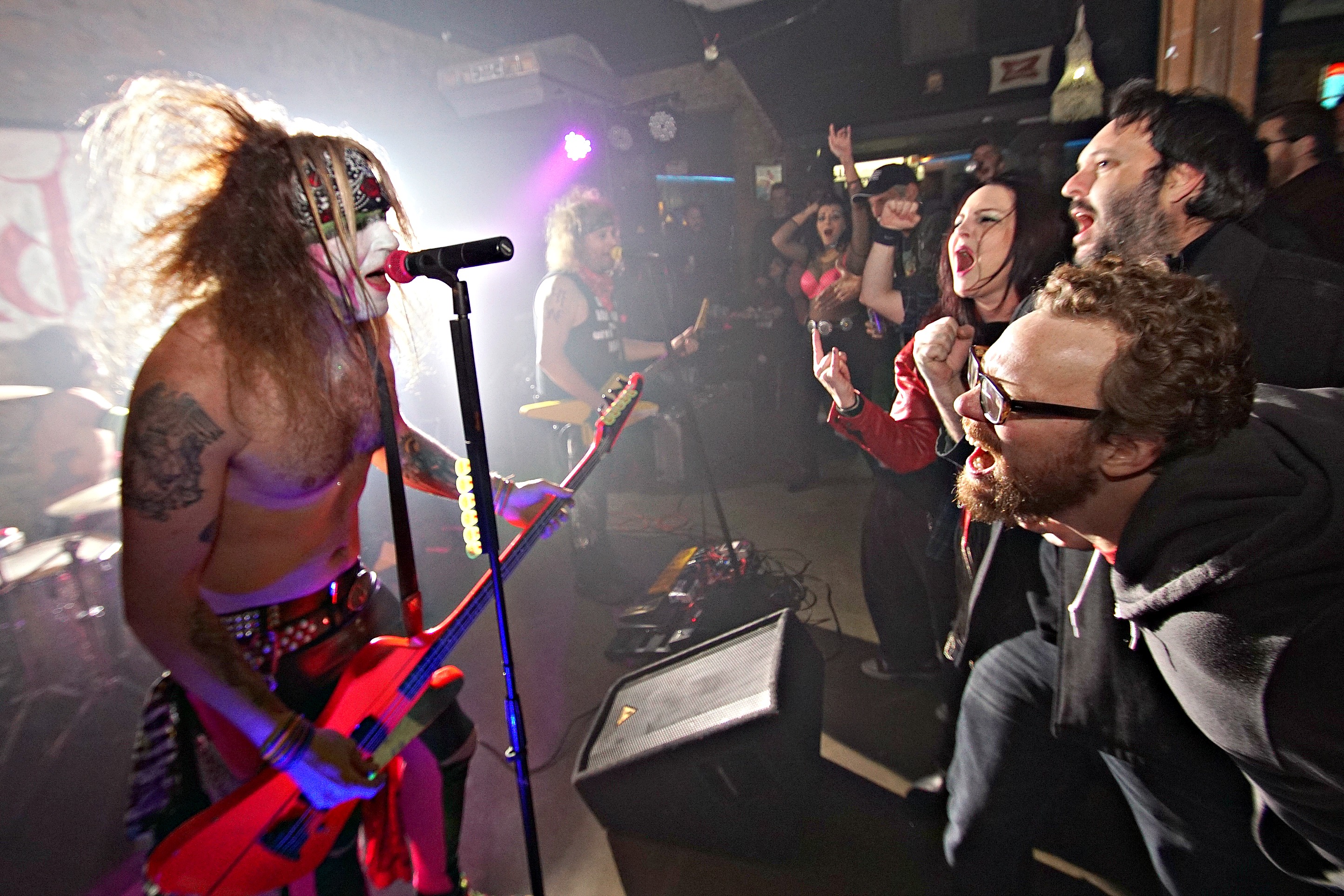 Make no mistake about it– the best rock show in town on Friday night was at Frank’s with The Midnight Devils. The Nebraska-based (Nebraska??!) glam rockers tore Lawrence a new one thanks to a stage show bursting with calamitous intent. With faces painted and untamed hair that stood at least a foot tall, the trio delivered everything a rock and roll fan dreams of. There were windmills, high kicks, sing-a-longs, growls, whoops, hollers… believe us when we tell you that everything was on the table.

The hot-pink-pant-clad Dr. Rockso-esque frontman was the very definition of showy, and he had that crowd eating out of the palm of his hand. The sound was so immense, not even the blaring trains could drown them out (an otherwise normal occurrence at Frank’s, since it’s seated right next to the tracks in North Lawrence). Let us tell you about this showy frontman, though. This motherfucker was out of his fucking mind. He was all over that venue, scaling the bar, jumping in with the crowd, throwing his bass all willy-nilly to random audience members. He even threw a guitar pick at yours truly and it landed perfectly in our bra THE FUCK. He was a caricature of an 80’s glam rocker, and it aroused even the crustiest rockers of yester-year who happened to be in the house.

You couldn’t take your eyes off the band, not even for a second. Every time we put the camera away, we dug it right back out. The lineup was rounded out by the Vibralux powerhouse and Topeka’s Our Lives Yesterday. By the end of the night, musicians from both those bands were joining The Midnight Devils onstage, grabbing instruments, mics, lights, anything. Even musicians who weren’t playing that night, but happened to be in attendance, joined in. Chains, spikes, leather jackets, and sweat were flying about, masked by a cloud erupting from the overly-excited fog machine. By the end of the night, beer cans were thrust into the air in a poetic toast to the jaw-dropping performance. Every jaw in the joint was on the floor. It was a Grade A display in absolute mayhem, and probably the most rock-and-roll thing Lawrence will see all month.