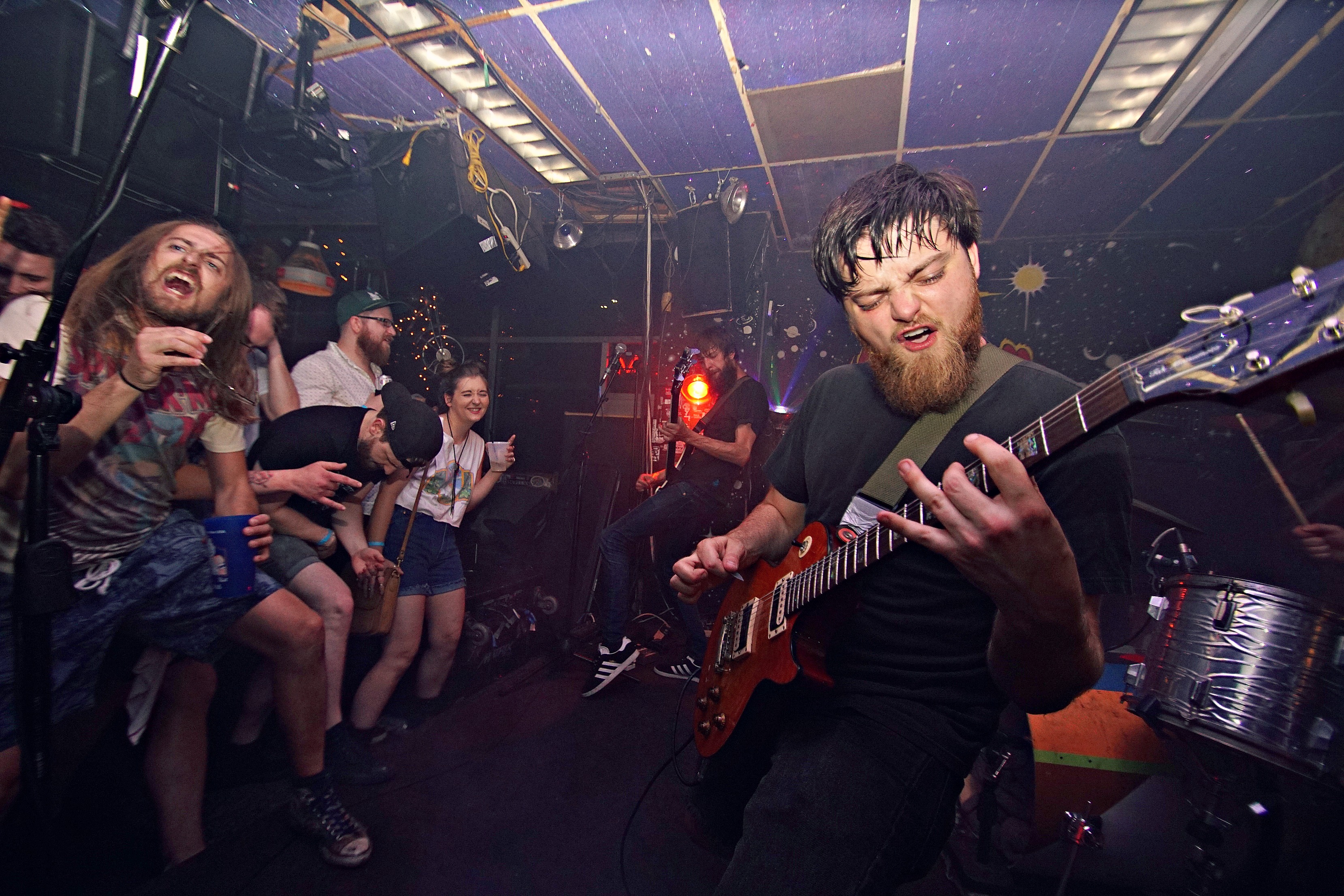 It’s hard to write stories like these, ones where you say goodbye to a Lawrence institution, but it’s even harder to do so when you’ve just gotten the wind knocked out of you.

Gnarly Davidson bid the fiercest of farewells on Friday when they played not one, not two, but three sets that slowly escalated into an uproarious affair full of antics, proclamations of “hot shit!”, and roughhousing. There were no musical celebrity appearances, no props, just pure rock and roll that kept kicking the audience harder and harder in the gut with each passing minute.

To the band’s credit, it began as a respectable affair– they billed the night as their senior recital and required the audience to arrive in semi-formal attire. Even the band donned some fashionable threads… until they took the stage at the Bottleneck. The drummer’s shirt came off, and bassist Sam Gunnerson pulled a Mr. Rogers when he slipped off his threads, opting for something more flexible for his signature high kicks, and stepped into a pair of Adidas sneakers.

Along with an opening set from Psychic Heat (hey, new lineup!), Gnarly Davidson delivered two sets comprised of songs played in the order in which they were written. Let me tell you, the band went out about as hot as they came in… by setting asses on fire. Those signature high kicks were stretched even higher (Sam, have you been doing yoga?), and guitarist Mitch Jones snarled and growled with more aggression than we’ve seen from the large-framed musician. The crowd dug it and partied along for the first set, accompanied by a giant inflatable poop emoji that had somehow made it into the event (appropriate, considering the band’s tagline: “Hot Shit!”). There was also the matter of Sam’s spitting, a trademark that had become tradition at every show. His spit trajectory was in fine form, and the crowd eagerly basked in it as though they were purifying themselves in the waters of Lake Minnetonka. A brief intermission allowed everyone to come out with a second wind, finalized by a “commencement” speech by local personality Mike Anderson, who donned a graduation robe for the occasion.

But the “hot shit” really hit the fan when the band announced a surprise third set at the Replay. I mean, you were all going to end up there anyway, and the venue has served as a second home (and sometimes, place of employment) for the band members. They were the last to go on and took the stage a little late, giving their fans plenty of time to pound away the alcohol and build a volcano of emotions over the band’s departure. So it’s no wonder that as soon as they fired up the first chord, the Bodies. Went. Flying.

Hot shit quickly turned into a hot mess as a sense of disorient took over the crowd. There was still a load of fog circulating in the air from JC and the Nuns’ set that took place earlier in the evening. Additionally, the band had finally ditched the fancy threads and were in classic form. The audience’s formal attire was slowly falling apart, and a sea of very well-dressed fans had manifested after the wedding party of two prominent scenesters descended on the Replay. I mean, everyone was there– the metalheads, the headbangers, the hip-hoppers, the jocks, the DJs, the chefs-just-off-the-clock, the motorheads, geeks, sluts, bloods, wastoids, dweebies, dickheads, and your Mom. Like, do you even LFK if you don’t Gnarly D?

Everyone wanted in on this goodbye, and sent the band off with a proper rock and roll sendoff. The fans were thrashing and trying to start some resemblance of a circle pit on the itty bitty dance floor, and many random bodies ended up falling or jumping onto the stage. Punches were thrust hard into the air (we call those Fists of Approval), and the microphone got knocked around so much, eventually the stand fell apart and fans drunkenly tried to hold the mic up to the guitarist’s mouth so he could sing the lyrics. A pair of glasses fell apart, phones got smashed, our cameras overheated, and somehow two fans took the calamity as an opportunity to, uh, dry hump each other on one of the monitors. It was an absolutely shit show, and fun as hell.

But most importantly, it was rock and roll. Remember, rock and roll doesn’t come from the heart, it comes from your crotch. And if there were ever a band to rise (heh) to the occasion, it’s Gnarly Davidson. They’ve never played a bad show, because you really can’t fuck it up with a sound like theirs. Even when, on one unfortunate New Year’s Eve, everything onstage broke, it allowed all the anger and frustration over broken gear to build into a fantastically maniacal set. So a set like this, where everything was a mess of sex, drugs, and rock and roll, was the equivalent of having your car break down on the side of the road, throwing a match over your shoulder, and walking away from the explosion without looking back. Gnarly Davidson have zero regrets, and there isn’t a day that will go by without Lawrence’s unending gratitude for setting that precedent. Here’s to one of the greatest rock bands to grace the greatest music town in the Midwest. Gnarly Davidson, tou truly are hot shit.