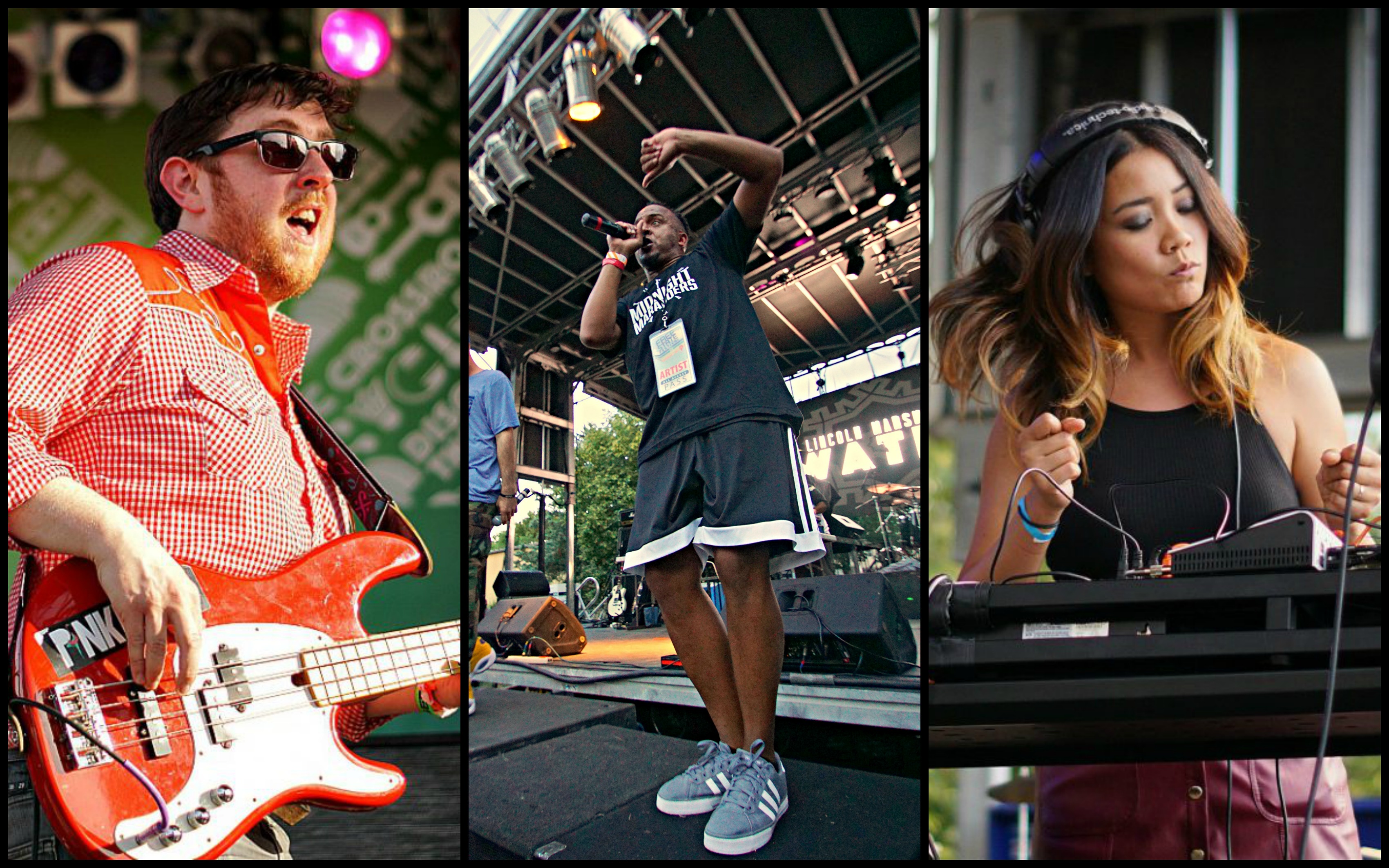 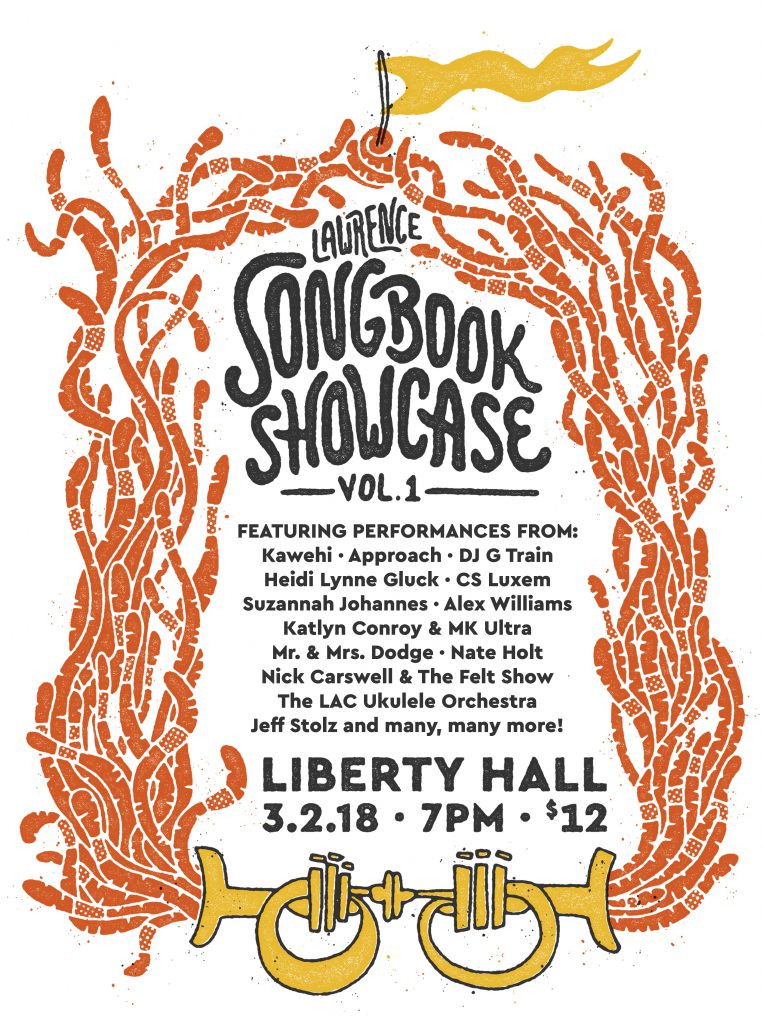 In a music community as strong as Lawrence, it’s hard to fit everything into one package. There’s a rich history of rock, emo, rap, and countless other genres– throw in too many iconic live music events to count, and the task of capturing the local scene in one snapshot becomes damn near impossible. But one project is taking on that task. The Lawrence Songbook Project will feature 12 Lawrence songs from a span of genres and decades, transcribed.

To celebrate the debut of this project, the 2018 Songbook Showcase will be kicking off at Liberty Hall on Friday. The all-star lineup is nothing to scoff at– Kawehi, Approach, CS Luxem, and more are all set to perform (the full lineup is posted below). We talked to a few artists on the lineup about iconic music moments in LFK they’ve experienced as both musicians and as fans.

What’s an iconic local music moment for you?
“Seeing Archetype (ID & Nezbeat) play for the first time at The Bottleneck in 2000. I knew Nezbeat as a frequent concert goer (as I was, too) but, had no clue that he was a incredible producer.”

What has been an iconic local music moment for your act?
“Easily it was opening for Public Enemy in front of 8,500 Lawrencians in 2016.”

Why should Lawrencians pay attention to these songs?
“Songbook breaks down the wall between beginner and professional. It allows a person to learn materiel for a home grown artist/group that is a working member of your own community. Nothing beats being able to reach out and touch the makers of music you appreciate.”

What’s an iconic local music moment for you?
“The first time I saw Jordan Geiger play at the Hospital Ships release for Oh Ramona at the old upstairs Love Garden. I was in awe and at the brink of tears the whole time.”

What has been an iconic local music moment for your act?
“Every damn show! No, but really, there are certain shows you play that just feel so right and other local musicians are in the crowd and people are feeling it. To me, that is iconic.”

Why should Lawrencians pay attention to these songs?
“You should always know your community! Especially when it’s as talented and prolific as Lawrence’s is.”

What’s an iconic local music moment for you?
“I dug the Live On Mass series. Free music outdoors? Sign me up. I think the most fun I ever have, though, watching music in LFK are early evening Summer patio shows at Replay.”

What has been an iconic local music moment for your act?
“The first time I played at Bottleneck. That was a hell of a show. And Live On Mass got me in front of lots of LFK folks and I enjoyed that too!”

Why should Lawrencians pay attention to these songs?
“I think supporting local music is one of the best things you can do for your community. Music brings people together and wouldn’t it be great if those songs were made by the people you spent time with every day? I think this town has some amazing musicians that deserves lots of hometown love. Musicians who play sometimes twice a week to entertain the community. I, for one, will enjoy getting to know these people through their music.”

What’s an iconic local music moment for you?
“So many iconic moments, but seeing my buddies in The Phantastics play to a packed crowd in the sweltering heat on the street outside the Lawrence Arts Center – opening for George Clinton! – was pretty incredible. It was a sweaty funky street party and they killed it!”

What has been an iconic local music moment for your act?
“Our show for St Patrick’s Day last year in Liberty Hall was something pretty special for us. It’s a beautiful room to play in, and I’ve seen some amazing acts there, so it was a big deal for us to have our own show on the marquee. You can feel the history on that stage, and to me, it’s the most iconic room in Lawrence. Any chance to play there is special.”

Why should Lawrencians pay attention to these songs?
“The concept of the songbook is so great. This first volume is a collection that spans a wide range of artists who’ve been making music here for some time. It’s diverse and colorful, and poignant too. I learned to play piano from books full of songs that became timeless, and that’s what the Songbook does; records this time in music that’s specific to us and our place.

But I do think and hope that’s it’s just the beginning of a continuum of musical output. It’s another way to think about how we all contribute to what makes Lawrence a creative and colorful place to live and make art. And people need to use it to learn and share songs. That’s what a songbook is really for, after all.”>

What’s an iconic local music moment for you?
“An iconic moment in local music for me would be when I saw Not Like Igor play at the Jackpot a couple years ago. The singer played these beautifully complex math rock guitar parts and made his way into the crowd and swayed with them, but really controlled the audience. It was such an atmospheric and influential night for me, being a teen that just wanted to play guitar as magically as him, and I still can’t believe it happened in that tiny little bar.”

What has been an iconic local music moment for your act?
“An iconic local music moment for MK Ultra actually wasn’t when we played a sold out show with Diet Cig and The Spook School, however we are absolute ride-or-die fans of both. For me it would be our very first show at Liberty Hall with Girls Rock Lawrence. The vocal instructors tried to get me to sing all throughout camp but I wouldn’t budge, until the showcase when we played our song to a shit ton of people. That was the moment we all knew this is what we wanted. When we yelled “fuck you” and screamed and shredded through that four minutes on stage, all just in high school and giving it our absolute all.”

Why should Lawrencians pay attention to these songs?
“From my Native American perspective, knowing your history is power. Appreciating those before you is necessary. Songwriting is a huge form of emotional labor and truth, and for someone to let us in and experience their feelings and creations is completely selfless and a true honor to receive.”