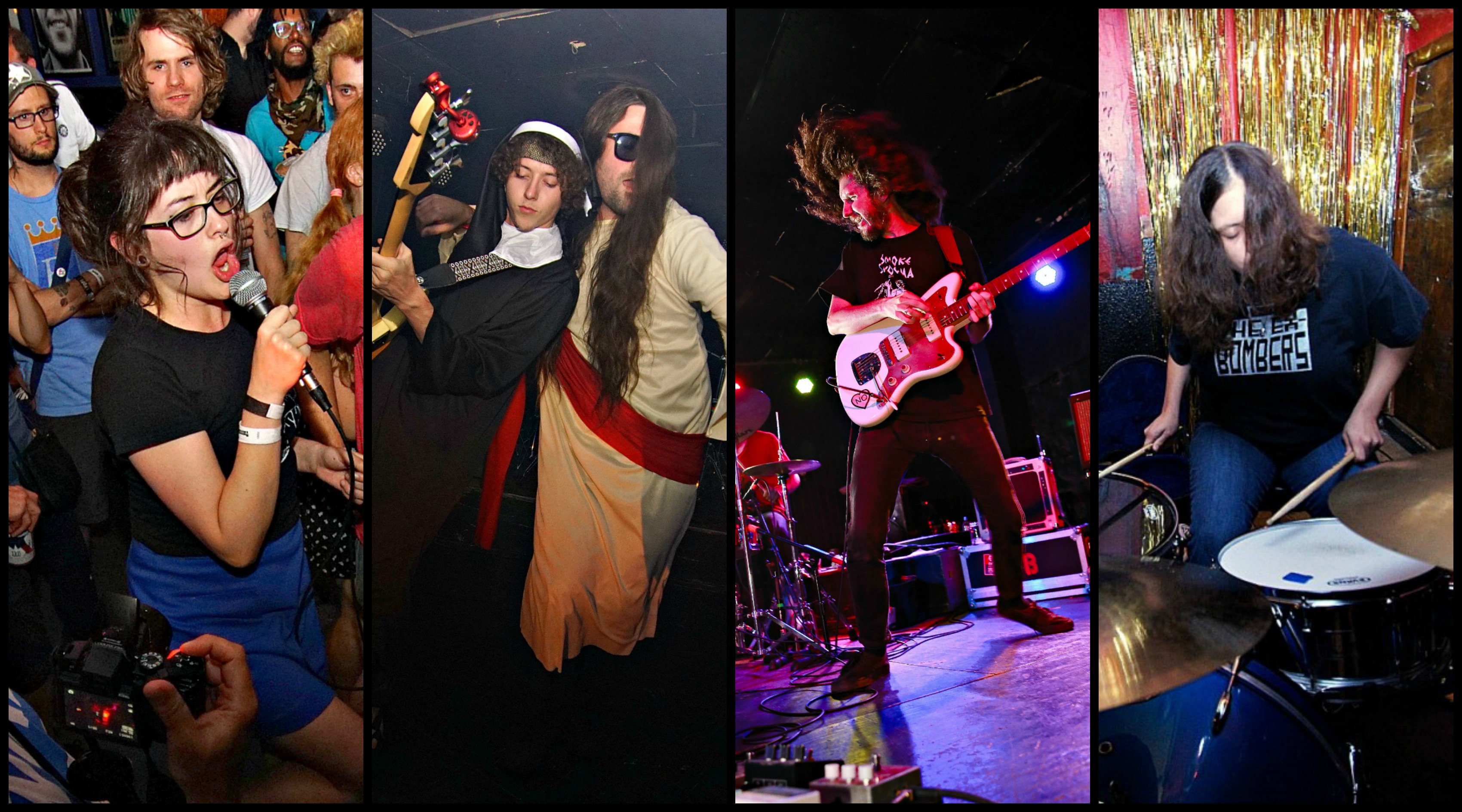 There are some years in Lawrence where Halloween is a little lackluster when it comes to live events and concerts surrounding the spooky holiday. 2017 isn’t one of them.

The holiday full of obnoxious antics falls on a Tuesday this year, leaving an entire weekend of tom-foolery open before the big day. We decided to put a rundown together of some of the exciting events going down. These are just a few of them, but you can totally find the full concert calendar (as always) on our site here.

After the Zombie Walk (which is looking to break a record this year, so expect lots of stragglers lulling about and bleeding out), you can drag your decomposing ass out to Frank’s for a show that’s far away from downtown but still sporting plenty of good rock and roll. That’s where two Kansas City acts, PopSkull Rebels and Haunted Creepys, are expected to join The Mad Kings. We’re expecting plenty of solid rock and roll, as The Mad Kings are one of the more active bands in the area (seriously, they play more frequently than any other band we know) with a frontman whose voice will likely boom louder than the passing trains next to the beloved North Lawrence venue.

There are a couple of events to note here. An early, all-ages affair will feature an exciting Pride Party on the patio, but the night takes a softer turn for the late show with an all-star lineup from High Dive, featuring Shy Boys (Kansas’ landlocked version of the Beach Boys), indie rockers Tyto Alba, and the highly experimental Bonzo Madrid.

The Granada with: The Floozies / EPROM / Maddy O’Neal

If you’re looking for something a little less local and little more on the wild-and-out-of-control-dance-party side, head to the Granada for The Floozies. We’ve seen people dress up and go balls-to-the-wall nuts at The Floozies before, so that sentient will likely escalate for their Halloween-weekend show. While technically the funky band heavy on the electronic sound is from Lawrence, they’re rarely here. You can almost always find them on the road playing sold-out shows to anyone that loves to party. No matter what costume you end up wearing, make sure to bring your dancing shoes (trust us on this one).

Saturday is where most of the debauchery surrounding live music and Halloween go down, and it starts at Frank’s. Mr. and the Mrs. are one of the most exciting two-pieces in local rock and roll, as their energy is eternally raw and gnarly. They’ll be joined by MK Ultra, a band born out of Girls Rock! Camp, and a solo performance from Invisible Public Library’s Brandon Barnett.

As if White Schoolhouse didn’t already have enough of a reputation of being home to some of the most exciting local shows in Lawrence this year, they’ve decided to host the Black Cat Ball.

This event comes with a hefty lineup of locals, and could be tied for one of the most crowded and chaotic events of the weekend (if they play their cards right). The genres range from indie to psychedelic to punk, with mostly local artists taking the spotlight. KC’s Lovergurl, queen LFK witch La Guerre, bad boys Westerners, Americana-infused Odd Harmona, and outright madmen Psychic Heat are all scheduled to play, with a high chance of culminating in costumed rumpus. This is an affordable, all ages event that should give access to local music fans who don’t always have the opportunity to hit the venues on any regular night.

The Gaslight with: Ask An Adult / Stiff Middle Fingers / Our Lives Yesterday

If you love loud, weirdo rock and claustrophobic spaces, the Gaslight is where you’ll want to remain planted on Saturday night. If the weather cooperates, the tiny North Lawrence bar bordering the bridge will be home to one of the most oddball acts we’ve ever covered, Ask An Adult. If there’s ever been a local band to provide a spooooooky, Scooby-Doo-esque Halloween soundtrack, it’s Ask An Adult. They’re highly entertaining and give zero fucks, which should make for an exciting time. They’ll be joined by scantily-clad punks Stiff Middle Fingers (who recently made big news after the singer traveled to Washington, D.C., and mooned the Vice President) and Our Lives Yesterday.

Every year, the Replay books a unique show for Halloween, and every year it delivers. The town has not only grown fond of their night of locals-turned-cover-bands, but they genuinely look forward to seeing the announcement. Generally, a local band with a large following takes on new personas to cover a national act or a theme. This year looks to be one of the loudest events of the night, with rare performances you’ll likely never see again. Gnarly Davidson headlines with the Black Album, though the Facebook event says not Metallica, Young Bull does a surprise mix, and Wendy Moira (now with a new lineup!) does Monster Ballads. Hot dog!

Additionally, the show is happening right after the exciting return of Fashion Monsters on the patio. So expect a lot of people not only donning costumes, but dressed to the nines thanks to the highly fashionable event hosted by none other than local drag superstar Deja Brooks.

Gogol Bordello at the Granada

Ten years ago, Gogol Bordello rocked Lawrence on Halloween so hard, it’s a wonder anyone’s costumes stayed intact. This year, after spending nearly a decade away from a town they used to frequent heavily on their nonstop tours, they make their triumphant return to the special holiday. This show is absolutely one not to miss. We’ve been covering Gogol Bordello for years, and every shows is a sight to behold. The gypsy punks bring a special, unmatched energy to the stage with a massive lineup, dancers, and (this year) a full horn section. Do not sleep on this show, and be sure to read our interview with frontman Eugene Hütz before you head on down.

The Replay with: Stone Grower / JC and the Nuns

It’s quite fitting to have this lineup at the Replay on Halloween night. With barely any time to recover from the weekend, the downtown dive is set to welcome two psych-rock acts making a big impact this year. Every time we think psych-rock is on the way out, acts like Stone Grower and JC and the Nuns reel us back in and remind us it’s here to stay in Lawrence. JC and the Nuns, conveniently, will already be in costume as they rock their habits and robe at every show. But don’t write them off as a gimmick, the band has serious songwriting chops, top-notch players, and an absolutely captivating live presence. This lineup will be the best way to wind down after a full weekend of mayhem thanks to America’s naughtiest holiday.
Tags:concert calendar, frank's, Frank's North Star Tavern, gnarly davidson, gogol bordello, halloween, halloween preview, kansas, ks, la guerre, lawrence, lfk, live events, psychic heat, the floozies, the gaslight, the granada, the replay, wendy moira
Share:
Facebook0Tweet0LinkedIn0Pin0

Counter Culture: Gogol Bordello's Eugene Hütz on the power of performance in a complacent society