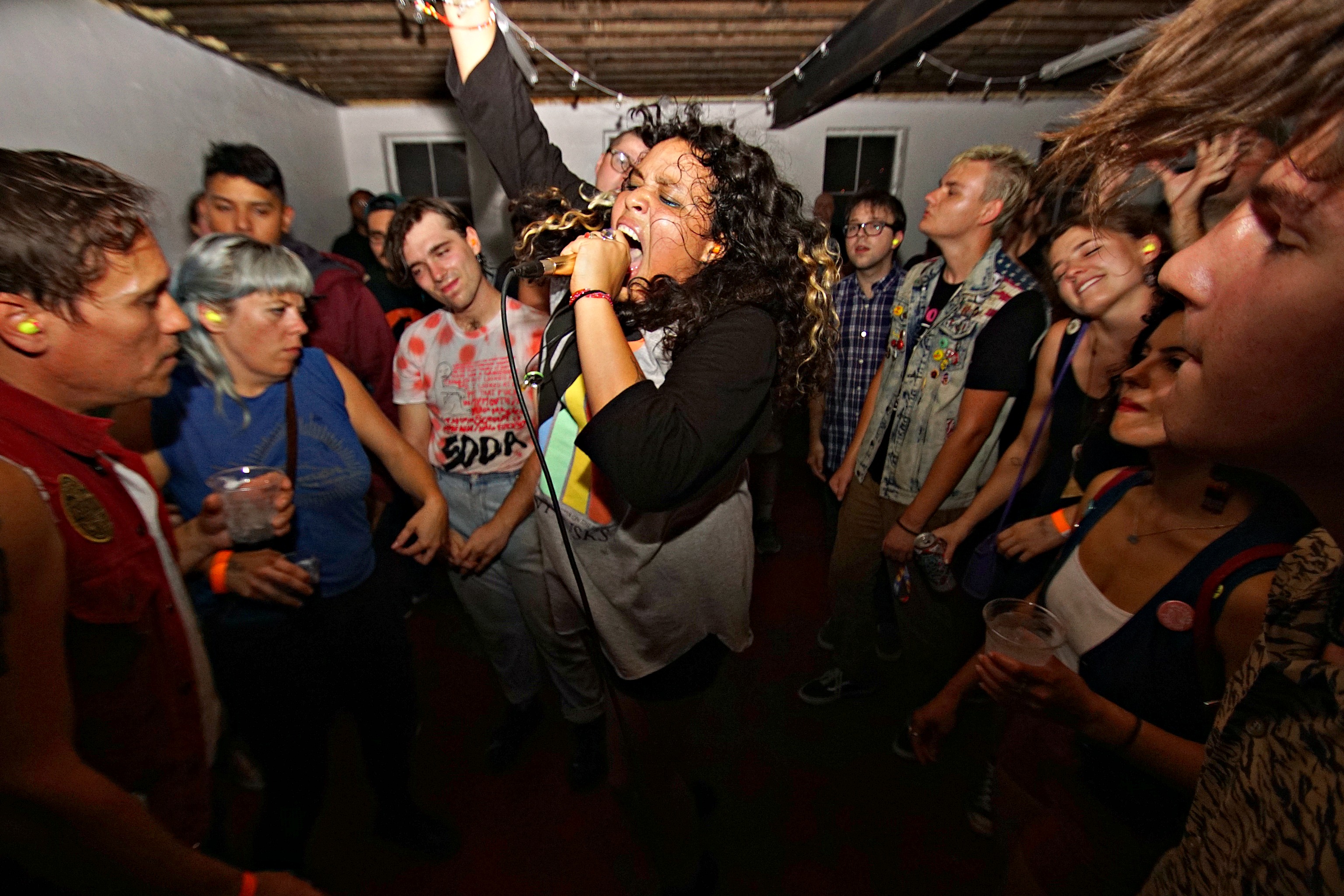 Lawrence has been itching for a really good, all-ages DIY venue for punk shows– and it looks as though it may finally have one.

White Schoolhouse (or as we like to call it, Fancy Outhouse North) launched the first in a series of basement punk shows on Monday to coincide with the eclipse (they even decorated a large eclipse which hung in the basement next to the bands). Upon pulling into the dirt road leading to the space, revelers were greeted with a large sign that read “Punk Show Here” courtesy the local art store Wonder Fair while the owner of our local record store donned a neon yellow vest and directed traffic (truly making it a community effort). Inside was an absolute who’s who of the local music scene, jazzed on the recent eclipse followed by the debut of this new venue.

The humidity was as thick as the political tension that’s been in the air as of late, and this was reflected in each of the sets provided by the musicians. Musical activists Ebony Tusks, perhaps the most conscious of all local rap acts, addressed the recent concerns and noted our vulnerability as a community. At a time when we, as a people, are most vulnerable, Ebony Tusks provides the type of music that becomes our rallying cry.

While Ebony Tusks had us acknowledging our connectivity, Warm Bodies encouraged us to embrace our panic. This is what it looked like to have a full, public meltdown. The Kansas City punk band’s vocalist threw a tantrum ALL over that basement, slamming herself on the ground with ear-piercing shrieks. She surrounded herself in an observing crowd, wildly flinging her eyes open and whipping her head around, staring down everyone in a panic while the band shredded and flailed frantically in the “stage” area. It was absolutely thrilling and could have easily had the audience confronting their own anxieties.

Downtown Boys, of Rhode Island, continued the politically-charged sentiments of the night with songs that addressed our role in the world and responsibility to mankind. They encouraged us to use our words, saying “lips bite,” and also informed us how to take power back from the colonizer. In between their tunes, the vocalist provided cognizant and encouraging statements. But amidst all this mindfulness, Downtown Boys brought the party, you guys. There was jumping! Sax! Punk! Dancing! Everything you could ask for at a wild punk show (except for a pit) was there. Despite the sweltering basement temperatures and the roaring storm outside, scenesters young and old remained planted in that space to fully embrace the party.

The first round of White Schoolhouse’s shows turned out to be a raucous, crashing success. It joins the ranks of Decade and the Haunted Kitchen in the movement that’s putting DIY shows in Lawrence in the spotlight. The next show is set for October, and features Screaming Females (a band we once covered on the coveted SPIN stage at SXSW), Street Eaters, Leggy, and The Whiffs. You can find out more about that show here. If the venue manages to keep pulling in touring acts and pairing them appropriately with wild local and regional acts, this could result in a fantastic resurgence (or rather, continued advancement) of the phenomenal music scene here in LFK.