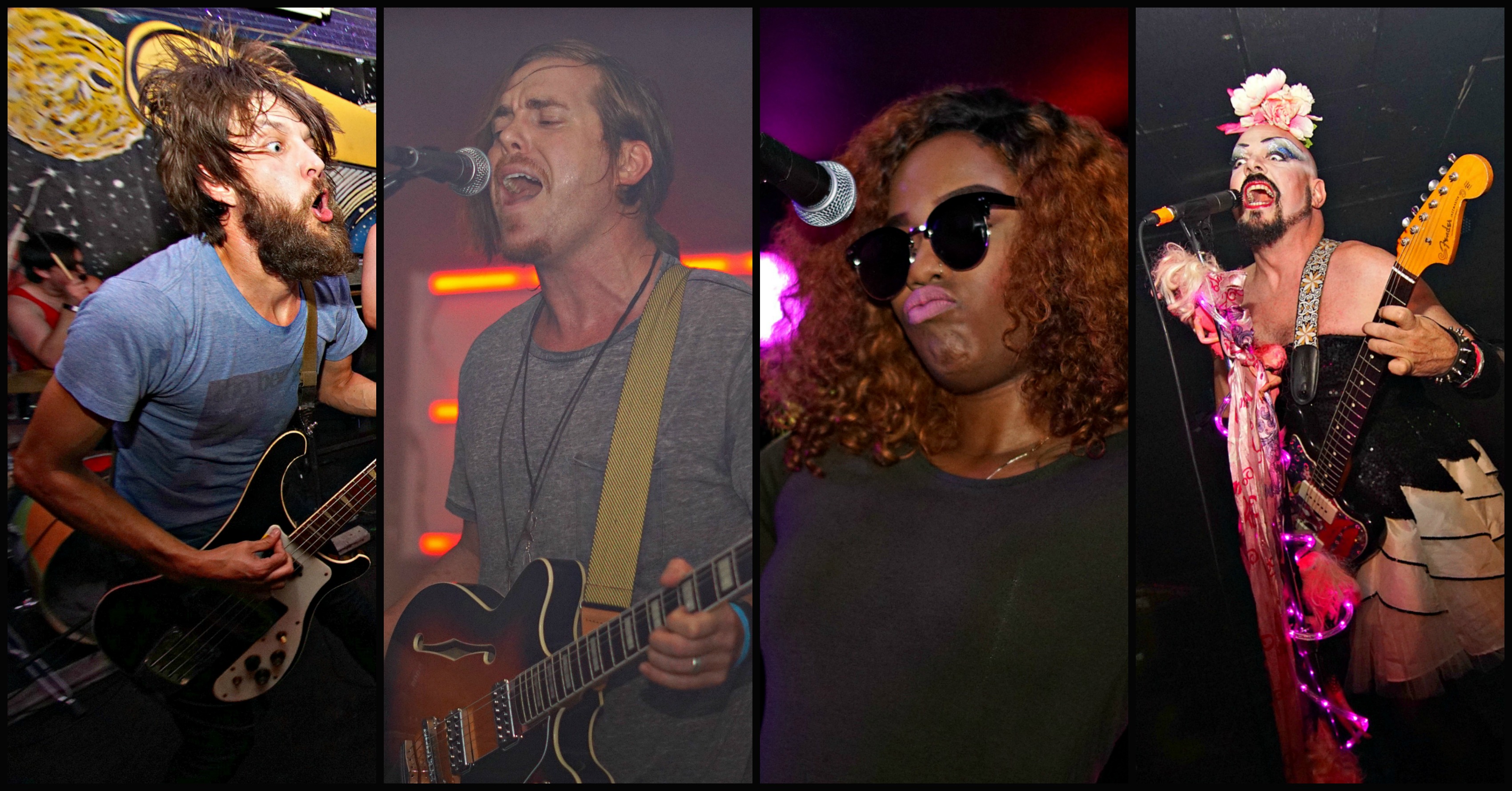 Well gosh darnit, aren’t these guys just adorable. Instant Karma, out of Kansas City, came off as one of the more charming acts on the bill. Their soulful music, backed by an instantly attention-grabbing voice from the band’s frontman, perked up the Jackpot on the first night of the festival.

This is feel-good music. Instant Karma are joy-makers, and adorable to watch. This is a band you can indulge in, and they’re easy to groove with. But their alluring and joyful stage presence is what will likely reel you in for the night.

It didn’t take much for Crystal Rose to impress. She was surrounded by only an acoustic guitar and minimal drums, yet her performance produced a much bigger sound. This is what perfect pop sounds like, and Rose’s onstage demeanor makes her just so damn likable.

If you paired Cyrstal Rose with Katlyn Conroy and Jessica Paige, you’d likely have the perfect pop trifecta (somebody needs to book that lineup, like, now). On Thursday night, she indulged with both originals and cover by other powerhouse pop artists. Although she has only recently landed in Kansas City, we expect her popularity to grow fairly quickly in the area.

The first thing we noticed onstage was the pile of Barbie dolls. Then, members of Vibralux emerged in full, glittery drag and started tucking the dolls into their bras.

It has been a good 15 years since we’ve seen Vibralux play in Lawrence, so this set was one of the more highly-anticipated ones at the festival. The entire performance was just a spectacle, with constant sass and snide remarks that pushed everyone’s buttons. At one point, saucy frontman Mercury Mad even addressed the Lawrence crowd as “bluegrass bitches” before laying into the sound guy for the 10th time that night. But the height of the evening came when Mercury had a Courtney Love meltdown onstage.

We can’t stress it enough: Vibralux easily had the best set of the night. We were already familiar with the band’s expert skills thanks to all the nights we spent watching them at La Tasca (now known as the Jackpot) years ago. But, as they say, absence makes the heart grow fonder. We missed this absurd, glamorous band. They push artistic boundaries, and colored with all the crayons in the box.

Fun tidbit: Vibralux’s drummer had a family emergency, so Jason Meier (of the now-defunct People’s Punk Band) filled in at the very last second.

If you missed the set, don’t fret. They’ll be performing at Pride Night at the Bottleneck on August 2nd.

Here they are beginning their first song of the night by chanting “Bitch! Bitch! Bitch!” over and over again.

Well, once again, no one stole the show quite like Gnarly Davidson.

The Lawrence heavy-metal headbangers closed out the night on Friday of the festival. If you didn’t get punched in the jaw during their set, you were probably doing it wrong. This is where festival-goers came to lose their shit. It was quite cathartic, considering how slowly and gradually the day’s events unfolded. Friday was by far the busiest night of the festival, culminating with all the heavy hitters taking the late-night time slots all at the same time. But if you were lucky enough to squeeze into the Replay after midnight, you got to partake in the lunacy that is a Gnarly Davidson show.

We’ve written about this Lawrence gem countless times. You’d think we’d run out of things to say by now, but they JUST. KEEP. SURPRISING US. They pull out new songs and new ways to get the crowd’s panties in a bunch. Bassist Sam Gunnerson is the main culprit when it comes to these antics. His onstage persona has become a bit of a chaos commander, constantly rallying the troops into mayhem. A simple flail of his arm or wild-eyed stare is all it takes, and the crowd is under his spell. But what’s really impressive is the wide appeal they have. One glance at the audience, and you’ll see hippies, punk rockers, and hip-hop heads all smashing together in hysteric unity. It’s like the United Colors of Benetton, fueled by uppers and booze.

Approach is pretty much the King of Lawrence music. So when he throws something together, Lawrence shows up.

The longtime Lawrence rapper headed the showcase for his label, Datura Records, on Friday night at Lucia. While most showcases brought four or five performers each to the festival, Datura’s brought more than ten. The event had a focus on performers from along the I-70 corridor, ranging from Kansas City’s lightning-fast lyricist Sheven to Topeka’s newest up-and-coming celebrated talent, The Starchild. Lincoln Marshall, Approach’s joint project with MilkDrop, naturally made an appearance. This was the second performance of the day for the two partners after hitting the outdoor stage at the other end of the block earlier in the evening.

Basically, everything you’ll ever see out of Datura is a winner. So pay attention when you see the name pop up in your Facebook feed.

If you went to Field Day Fest and didn’t see Jaenki, you fucked up. This was possibly the most magical and whimsical moment of the entire festival. Upon entering the Granada, you were met with signs warning of strobe lights in use. Jaenki brought in an entire light show, complete with lasers that shot out into the audience.

The former Republic Tigers musician filled that entire venue with pure bliss, thanks to his warm and enchanting electronic sounds. The emotions run high on this one, both within the music and Kenn Jankowski’s onstage demeanor. This is what Sigur Rós might sound like if the lyrics were in English. Jaenki brought the whole package with top notch stage presence and a vivid light show. We seem to only ever get to see Jaenki at music festivals, so you’d be doing yourself a favor by jumping at the first opportunity to see this act at their next KC or Lawrence show.

Here’s your must-watch clip for the day:

The Phantastic really do know how to make an entrance.

The Kansas City band, known for conjuring up the party, headlined the outdoor stage on Friday night of the festival. But rather than just taking the stage and diving into their first song, they sent the horn section out into the audience. While the drummer lured them in with beats from the stage, the trombone and saxophone players began their march from the back of the crowd. They shimmied and shuffled slowly, with one musician on each side, all while getting the crowd worked up. When they finally reached the stage, the rest of the many-membered band joined in one by one until it was an all-out jam.

This got an otherwise calm crowd to perk right up– and before the vocalists even came on, everyone was dancing. It’s impossible to sit still at a Phantastics set (if you try, your booty will betray you).

These musicians are no strangers to Lawrence. We’ve seen them play big stages and small stages here, and every time it’s a celebration. You may never feel so alive as you do when The Phantastics hit the stage, and Friday’s set at Field Day Fest felt more like a celebration of life than anything else.

By the final night of the festival, everything was running late. Bars in Lawrence close at 2:00 a.m., and when it was time for last call, that’s when Nancy Boys fired up their set at the Jackpot.

Don’t fret, the hardcore band’s sets are famously short. They average about ten minutes, and you better believe it’ll be the best ten minutes of your day every time. If there was ever a way to close out the final day of the festival, this was it.

Festival-goers spilled out of all the other venues and piled into the Jackpot for what would be, by far, the most chaotic event of the week. The unruly feral wolves, aka their fans, absolutely destroyed the place while the band raged away onstage. They didn’t even pause between songs, the tunes just slammed into each other as hard as the lunatics in the crowd. The venue even had to turn the lights on and kick everyone out (when’s the last time you remember that happening at the Jackpot?). This means fans absorbed Field Day Fest up to the very last second, and left it on an incredible high, drenched in sweat and chaos.

If you aren’t aware of how important music-lovers are to a community, let me hammer it home for you.

These types of festivals don’t happen without the fans. Lawrence Field Day Fest is an event for local music. The festival doesn’t book big headliners, they book local bands for the locals. It’s important to keep a town like Lawrence self-sustaining this way in its entertainment scene. When fans show up for these sets and dance, thrash, and rock the night away, it’s because they like the music. Nobody goes to Cuee to be “seen,” they go because they like her rhymes. Nobody goes to Arc Flash to make a statement, they go because the music gets their heart racing. They genuinely love every piece of music that comes out of Lawrence, and Field Day Fest is how they show their support. It happens in the dead of Summer when the students are gone and the town is quieter.

So if you see people at the festival, it’s because they want to be there. The payoff for the fans is that they get the bands all to themselves for one glorious weekend, so they return the favor by partying harder than at any other point in the Summer. Without the fans, there is no Field Day Fest. So every bit of dancing, moshing, and joyous jubilee on their part is something to celebrate.

(We’ve posted a photo gallery of fans we spotted at Field Day Fest below.)

Honorable Mentions: Gigantic (for the hip wiggling and hair-flipping good time), Stitch81Classic (because she lays the charm on thick, and Lawrence has fallen in love with the KC rapper), Oxford Remedy (because what the shit, how are teenagers so good at nailing that 90’s rock and roll sound), and Ricky Roosevelt (for always turning the dance party up to 11).