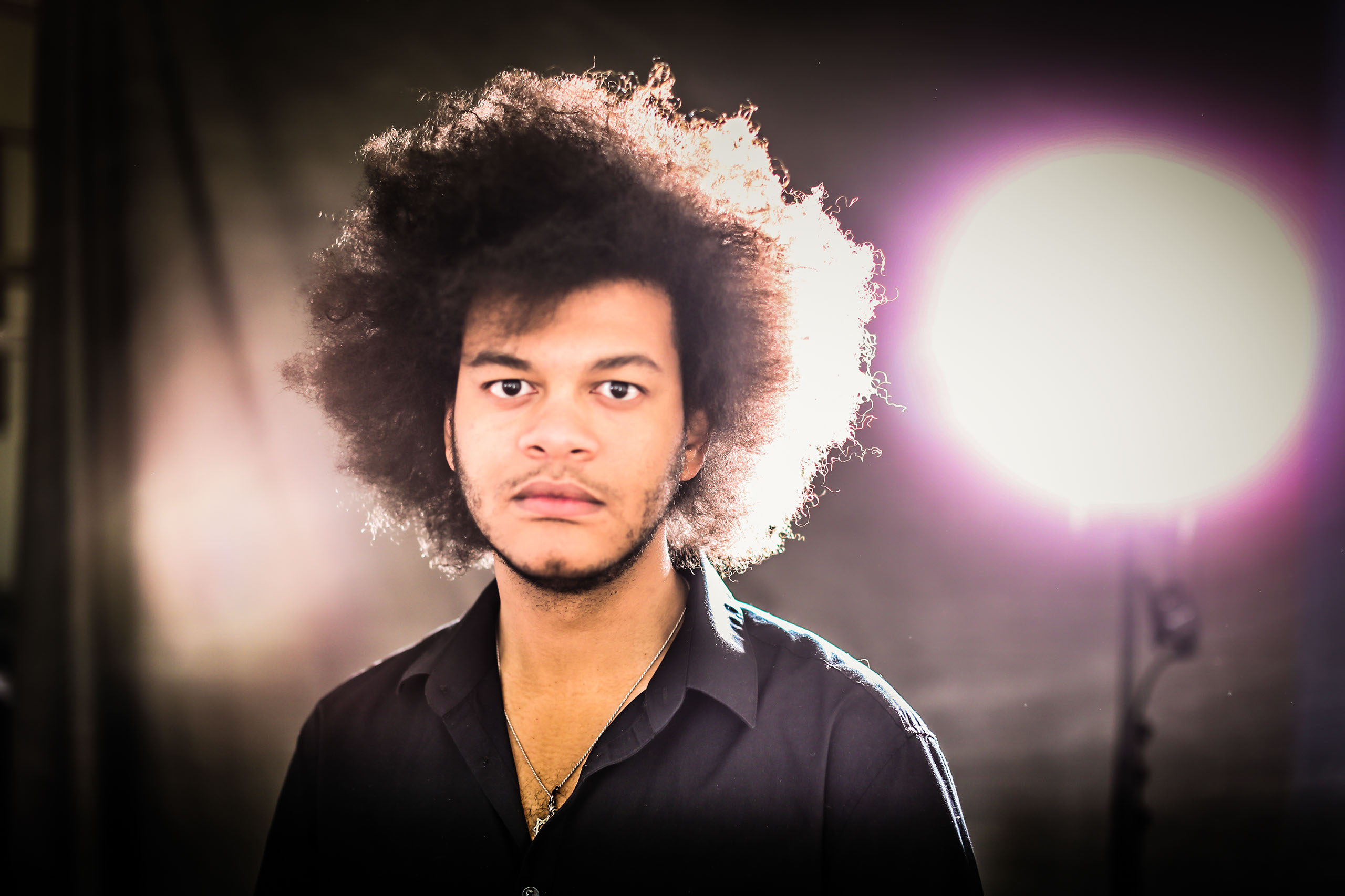 It’s hard not to feel a little pang of jealousy when you learn about the life Calvin Arsenia has lived up until now. Just within the last few years, the Kansas City musician taught himself how to play harp, played internationally, and rubbed elbows with some of the finest musicians in the world— and he’s only 26 years-old. Standing at an eye-catching height of 6’6”, the harpist is charismatic and sports the voice of an angel and a very inviting smile. It’s no wonder he’s developed such a devoted fan base in Kansas City. But this weekend, he’s finally bringing the act to Lawrence when he plays the early matinee at the Replay Lounge this Sunday at 5:00 p.m.

His journey to harp music is a tale of determination. After bouncing around the U.S., Calvin finally settled down in Kansas City where he started playing in the local music scene. It was when he noticed the harpists that played prominently with Bjork and Florence and the Machine, he wanted one for his own act. But it was more affordable to learn it himself. “In the end, I ended up renting a harp from a harp studio based in Lenexa,” he says. “At the time I couldn’t afford to rent the harp and take lessons, so I decided I was going to learn on YouTube.”

Shortly after that, Calvin found the opportunity of a lifetime when his church asked him to perform in Scotland. “There was a community outreach there that asked if I would be part of their staff, and they wanted me to be a positive influence in the music and art scene in Edinburgh and I said yes,” he recalls. This is also where he fine tuned his harp skills. “I thought it would be a shame to not take lessons from a harpist in Scotland. So I took lessons from a girl I found through a Craigslist ad, and she ended up being a harpist for the Scotland Chamber Orchestra. So I ended up not eating so I could take lessons from her.”

But Calvin says the starving artist persona isn’t something you come across overseas too often. “The government of Scotland and the U.K., they see entertainment as an industry that promotes tourism. There, you’re not allowed to play without getting paid because they value it as a skilled labor, a skilled work,” he says, noting that even open mic hosts get paid every time. “So in some ways, I began to value my work more because of the culture of that. When I performed anywhere, there was a standard wage and a standard understanding that you get paid for what you do.” These details may come as a shock to the average American musician, who has to fight for any payment at all. Calvin says even he used to pay to play in some instances. “Then when I came back, I definitely wouldn’t do that anymore.”

Armed with the knowledge and confidence of valuing his art, Calvin returned to Kansas City and made great strides. He could have gone anywhere after Scotland, but it was Kansas City where he saw his future as a musician developing. “When I moved back to Kansas City, it was a choice. It was intentional because the city is full of really amazing programs and really great artists, and it’s feasible financially to make it as an artist here,” he says. “Places like New York, you still have to be a waiter first. I feel that I came home to grow myself as an artist and to be able to be that full time, and to make a living with my work rather than living on support or working a different job.”

On The Road Again

Kansas City is, after all, where Calvin was so highly regarded at Folk Alliance International earlier this year. But despite his successes here, there’s a nagging feeling in the back of his creative mind. So after his record release this November, he plans to hit the road… maybe permanently. “I have a few really specific requirements with places that I want to live and work, and collaboration is really important to me,” he confides. “So entering into a city that feels really competitive and with attitude, that’s not where I want to be. So over the next year I’ll be looking for places to take what I’ve done here, and take it to other cities and other places, and find another situation where I can learn and grow.”

But until then, he’ll be working relentlessly on his craft. As a musician who has played nonstop since his teens, and continues to learn new instruments each year (right now he’s taking on ukulele and banjo), Calvin is very confident in the choices he’s made as a musician who dabbles on the eccentric side of the industry. “Not everybody gets the opportunity to know what their life purpose is, and I’m very sure of what mine is,” he declares. “And that is to facilitate transcendent moments through creativity for other people.”

Before he hits the road and disappears forever, you can see Calvin Arsenia play the Replay with fellow Kansas City songwriter Jessica Paige this Sunday at 5:00 p.m.