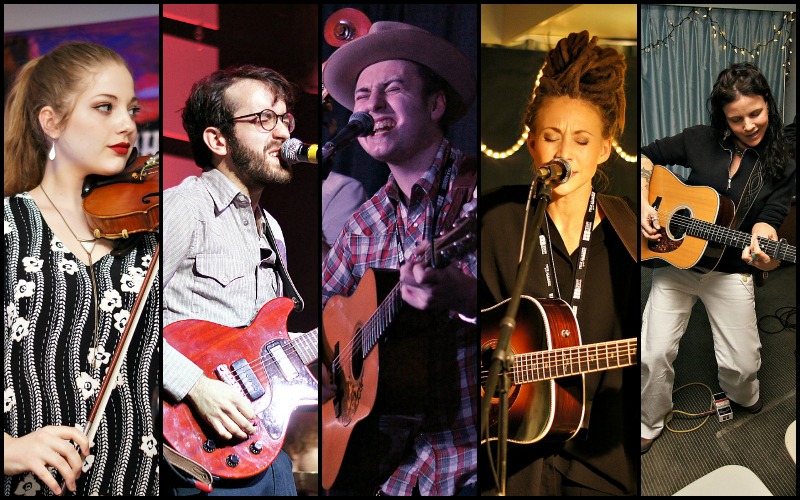 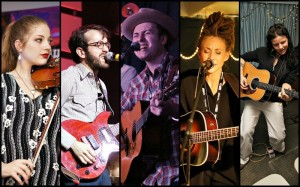 “Would you like a song where someone’s mean to someone else, or where someone’s dying?” That question, smirkingly posed by Curtis McMurty, is sometimes the very essence of folk music. McNary was the first performer on at Folk Alliance, an international conference that brings musicians from across the globe together for panels and performances. The conference, now in its 28th year, changes location every few years, but has lately been in Kansas City.

The festival, hosted at the Westin Hotel in Crown Center, brought folk musicians from all walks of life together. The otherwise glamorous building was dotted with dusty denim jackets, rope-like shoelaces gliding across the floor, and the occasional fedora. Considering the timeless nature of folk music (and the fashion that comes with it), It was as though the cast of “Inside Llewyn Davis” erupted inside the Westin. Bigger names took the stages in ballroom under bright and colorful lights, while everyone else took to private showcases by calm lamp lights. 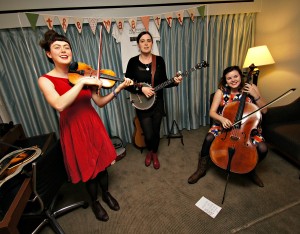 The main showcases on the larger stages are nice, but everyone knows the real party is on the upper levels of the hotel. This is where a handful of floors were completely blocked off for private showcases. The hotel rooms were converted into makeshift performance areas. Beds were stacked against the wall (or removed completely), folding chairs were set out, and Christmas lights were hung up against the curtains to indicate a stage area. Nearly everything was acoustic, and you can be almost certain that if someone was softly singing a gentle song in one hotel room, then somebody directly across from them in another room would be in the midst of a scream-filled barn burner. It was inevitable. 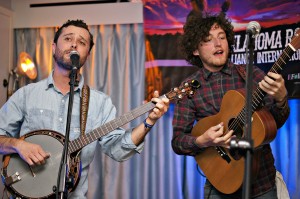 Because this is an international folk festival, some rooms and their performers were set up by country of origin. There were showcases for bands from Canada, Sweden, Texas, Oklahoma.. even strictly Kanas City. But no matter the origin, the musicians all shared a common trait and love for music. If the songs didn’t make you emotional, then they certainly made you chuckle. The dry wit was so thick, you could cut it with a knife. This was especially true with performers like Anna Vogelzang and John Calvin Abney. 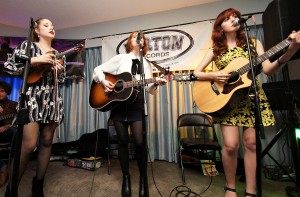 Abney is one of the many Oklahoma-based performers who wore their regional pride on their sleeves in the appropriately-titled “Oklahoma Room.” But this is also where we were turned onto Annie Oakley, a trio of teenage performers with a knack for perfect harmonizing and charm. The three are comprised of a set of twins and their childhood friend– and despite their young age, they came across completely comfortable and flawless onstage. This is a fantastic act with expertly written songs that we’re hoping will make the short trek up to Lawrence sometime in the coming year. 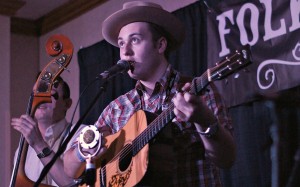 Our biggest surprise of the night, however, came from a 16 year-old performer from Pittsburgh, Kansas, named Julian Davis. It took a lot of convincing to come to terms with the fact that this man was barely a decade-and-a-half old. Along with a band comprised of Lawrence and Kansas City-based musicians, Davis is a flat-pickin’, honky-tonk-infused inspiration. The farmboy-turned-superstar ripped through his set with fingers fast like lightning, a voice and demeanor more spritely than Garth Brooks, and a forever-youthful face like Brian Setzer. He will no doubt be one of the best new artists, if not the best new artist, of the year in Kansas. His music is high-powered with a potency for fun, and left many people boogying and jumping up to offer their hearty applause. There was almost a collective grumble of disappointment when his set was over.

Lucky for you, he is set to open for Split Lip Rayfield at the Bottleneck on April 2nd. Here’s some poorly shot cell phone video that couldn’t possibly capture the excitement he brings to the stage, but could give you a taste of what’s to come:

Folk Alliance continues all weekend (even Sunday) at the Westin in Kansas City, and is highly recommended.