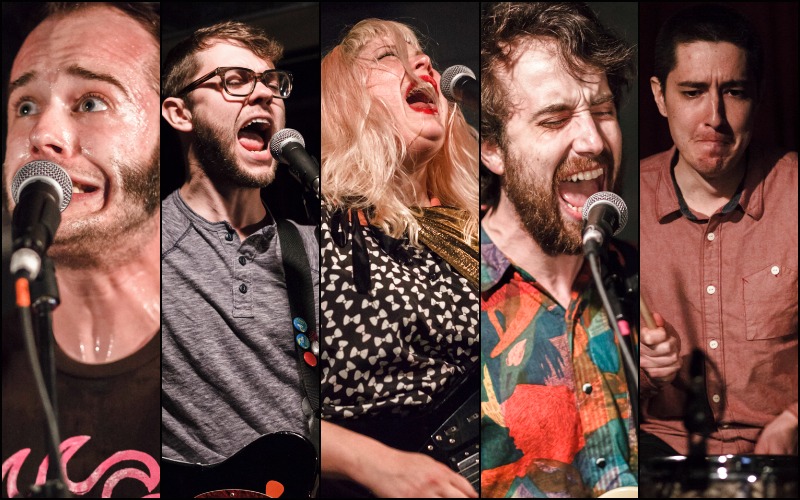 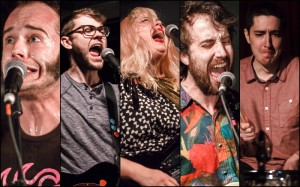 There’s no place like home, and on Saturday, home for Kansans was a little venue in Austin, Texas, called Shangri-La. Love Garden jackets, LFK shirts, and Replay regulars galore dotted the landscape. Kansas City bands were represented well at SXSW this year thanks to the Midcoast Takeover day party. But it was I Heart Local Music’s event that brought Lawrence rock in all its LFK glory. The bands on the lineup (particularly Something and the Whatevers) pulled out all the stops with fun stunts for the special Lawrence-centered event. 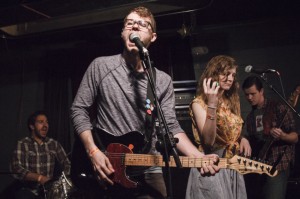 Not even heavy rainfall could dampen the mood as organizers packed up bands and gear and headed inside Shangri-La. The event started with a wild performance from budding indie folk rocker Spencer Mackenzie Brown. He brought the full band along for an exciting kickoff to the afternoon. Since this was also Spencer’s birthday, fans eagerly shouted well wishes to the performer throughout his set. 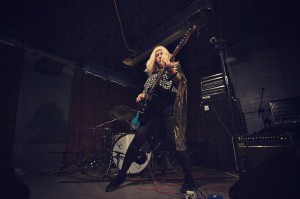 Bruiser Queen isn’t from Lawrence, but they might as well be. They’ve made LFK a second home and have fond connections with bands and fans here. Still, it always feels like there’s someone discovering them at every show.

At the I Heart Local Music showcase, they spared no flair as they donned golden capes and rocked the faces off of everyone with vicious shredding, tight drum lines, and wild blonde hair flips. If you’ve never seen them before, this was a jaw-dropping performance. We’re pretty sure some folks in the audience foamed at the mouth whenever the frontwoman propped her leg up on the monitor during one of her wicked guitar solos. 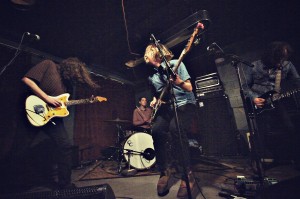 Rejoice! For this was (finally) Psychic Heat’s first time at SXSW. They were 100% Psychic Heat as they brought their heavy tunes, flailing, jumps, guitar solos, and all those other traits that make Psychic Heat shows a religious experience. Not one note was missed, and the spot-on set made Lawrence fans feel right at home. The rockers have somewhat become the darlings of the Lawrence scene. So when they play, fans show up in heavy numbers to support them. 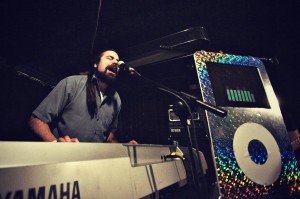 We honestly thought Something and the Whatevers couldn’t’ get any weirder, but somehow they managed to do it. The comedic punk-rockers normally use an iPod as their drum machine. But for this event, they constructed a larger, life-size, glittery iPod with a full working robotic face that talked to the audience between sets and encouraged them to give into their robot overlords (you can see video of this machine in action below). 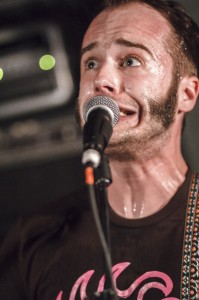 They then dived into a number of maniacal-screams, heavy guitar distortion, and hilarious lyrics. The audience ate it up. Organizers ate it up. Even concert-goers who seemed uneasy about all the yelling at first were, by the end of it, laughing it up with tears in their eyes. They may seem silly, but don’t underestimate Something and the Whatevers. They’ve learned how to (very easily) get on everyone’s good side, even if this is music you’d never find yourself listening to. 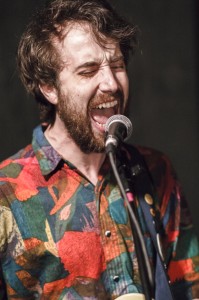 If you really want to get the point across about Lawrence music, you have to end a set with CS Luxem. There is no performer who’s been in the public eye of Lawrencians more than Chris Luxem. He plays just about every single week and has collaborated with dozens of performers and songwriters here.

Recently, he’s been playing with a large posse onstage. But on this day, he still managed to create a rich and full sound with just three members (Arc Flash’s James Thomblishon marvelously stood in on bass for this show). The whole set looked effortless (no doubt because CS Luxem is so well-versed by now). Luxem’s songs are so versatile. You can sway, you can rock out, you can even thrash to a couple of them. It was a beautiful, emotional, and heartwarming way to end a set filled with LFK love.