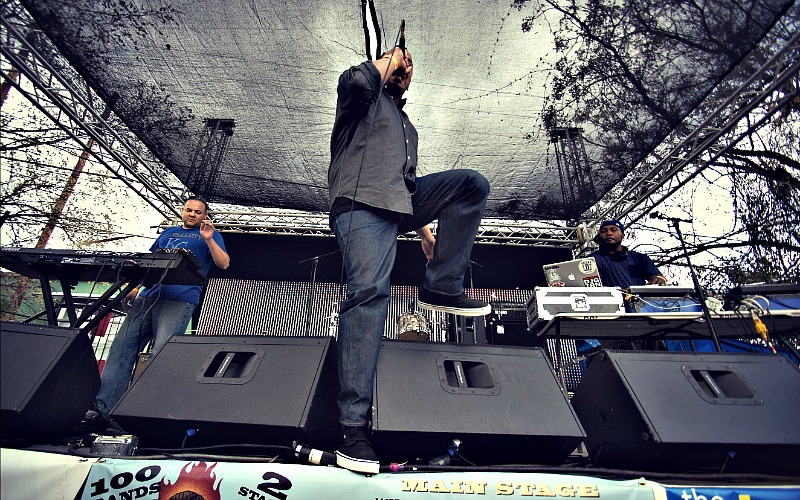 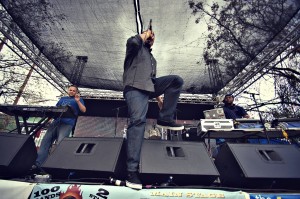 Approach is, without a doubt, the boss.

There’s a reason we’ve seen people race to a venue to catch his set. The Lawrence rapper is the very definition of showmanship. When this lyricist leader speaks, everyone listens.

Once again, Approach made his way down to Austin, TX, during the SXSW music festival to perform at Midcoast Takeover’s day party at Shangri-La. He spent all but a minute onstage before leaping into the crowd and as far as his mic cord could take him.

Aided by big-shot beat maker DJ G Train (one of the few remaining DJs who actually scratches) and keyboard commander Nate Holt, The Boogaloo Odyssey tore into their top-notch lesson in hip-hop. It’s important to note that while a lot of rappers tend to sample sounds and beats, Approach and The Boogaloo Odyssey created every single noise themselves. In fact, Approach spent years making every sound you hear under his rhymes. 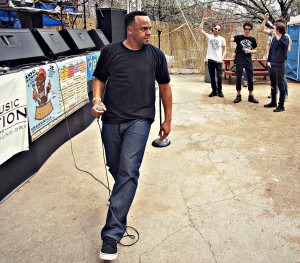 But while every sound is calculated, most of his moves are spontaneous. His freestyles are unmatched, and you never quite know what the boss is going to do in his set. “The beautiful part of our show is we’re making it up as we go along!” he exclaimed before strutting over to a group of bystanders and encouraging to wave their arms in the air. Once he was satisfied with everyone’s reaction to the beat, he declared “Rap music is good!” for all to hear before diving into his next verse.

When Approach really gets going, he tumbles all across the dance floor, interacts with everyone, and gets everyone grooving. The best part of the set is what Approach calls the “Get Down” portion of the program, when DJ G Train leaps off the stage and goes head to head with the man himself. You can watch it in the video below.