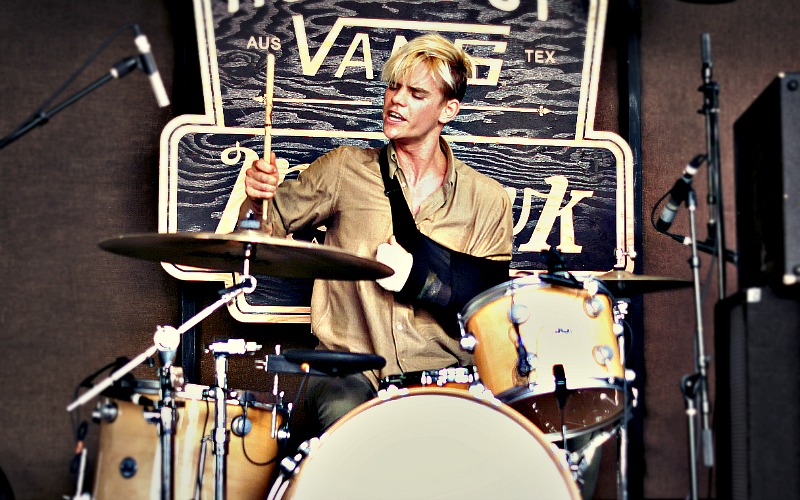 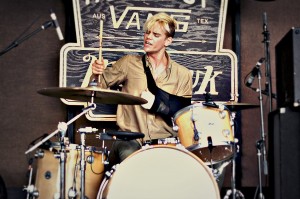 There really isn’t anything that can hold a band like Viet Cong back.

On Wednesday we set out to see them perform at the Pitchfork Day Party at SXSW. Because of their recent show with Muscle Worship at recordBar last week, we already knew that the guys in this band were generally gregarious and joyful fellows. But we saw their attitude put to the test on Wednesday when drummer Mike Wallace showed up with a broken hand and his arm in a sling.

Can you believe it? That guy drummed with one hand during the entire set. He also soundchecked with one hand, opened water bottles with his mouth, and used his one remaining good hand to (jokingly) flip off his bandmates when they heckled him about the injury. We already knew Wallace rolled hard when he showed us how bloodied his hands became after Viet Cong’s KC show last week. We knew he was a trooper, but we weren’t quite aware of the full extent of his badassery.

Don’t believe us? Here’s a clip from their show. Viet Cong’s songs tend to roll fast and hard, and Wallace maintained extremely well during the entire set. We’ll have to see how they hold up during the rest of SXSW, a festival that has bands playing up to several sets a day.

Happy Hooks: Sweet Spirit's live show is out of sight