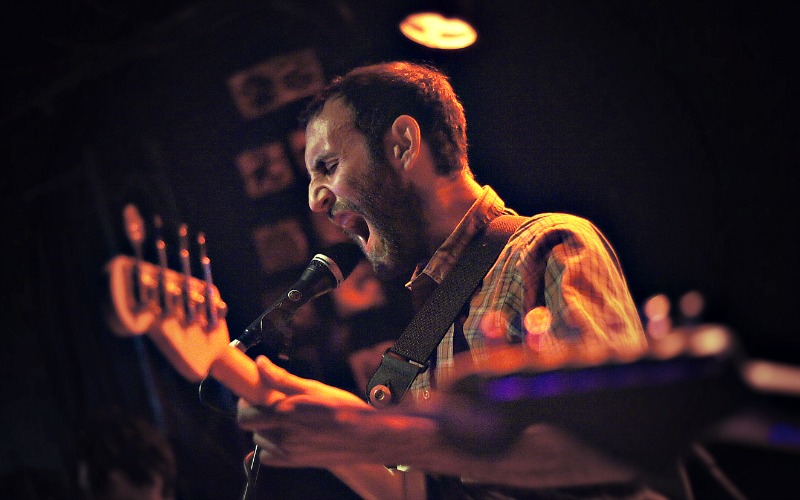 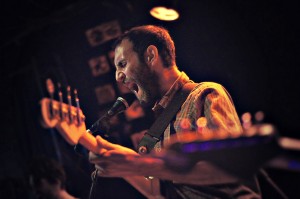 Viet Cong may boast some rich, emotional, and highly artistic music. But when they hit Kansas City on Wednesday, they were all about fun.

When we showed up to their recordBar show, a line was already forming down the block to get into the venue. But the band was outside in the parking lot, gleefully tossing around a frisbee while music blared out of a nearby vehicle. Once inside and onstage, the gregariousness continued as the four fellas spent time between songs joking about. The audience, packed in like sardines, was all smiles from start to finish.

Because the venue nearly sold out, this left minimum room for grooving and moving, but maximum room for joy. What the audience lacked in physical movement, they made up for in cheers and excited hollers. A lot of the crowd contained familiar faces from Lawrence. We spotted members of Psychic Heat, Paper Buffalo, Your Friend, and Radkey. This was obviously the event of the week, and with good reason. Viet Cong’s recently released album has been basking in some fairly positive press from the big players. 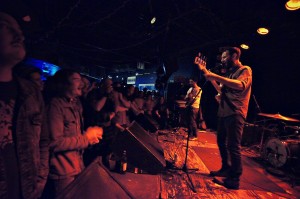 The band proved their media praise true when they delivered a stunning set on the recordBar stage. Thick guitar effects, rich synths layered throughout, and chorusing vocals hit a high note with the fans. The band went at it hard, too, breaking guitar strings and bleeding from their hands by the end of the set. Their commitment to preciseness with their unique sound left the audience unwilling to move from their staked-out spots. Hardly anyone dared to leave the set, even for a minute, for a smoke or bathroom break.

Viet Cong was joined on this night by Lawrence’s own Muscle Worship, a band equally consumed with accomplished and thick guitar effects. Muscle Worship spent much of the winter writing and recording, and their new music did not disappoint. If any band is capable of keeping an audience engaged in an opening slot, it’s Muscle Worship. So now, they’ve got fans highly intrigued and hungry for their next album. But until it’s released, they’ll have to eagerly line up for shows like Wednesday night’s if they want a taste of the sweet stuff.

We are gathering in South Park on the West side RIGHT NOW for the #Pride2022 parade! 🏳️‍🌈💖🤘🏽