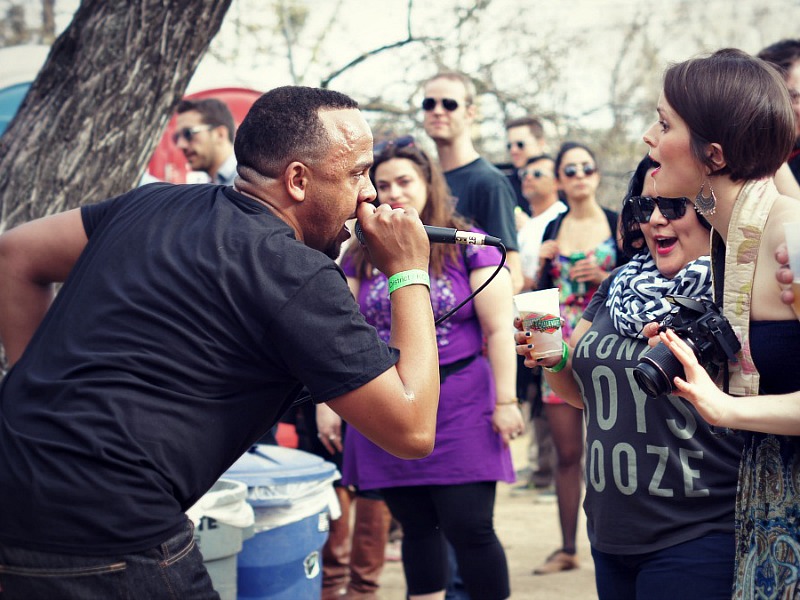 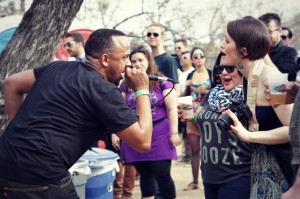 Out of all the acts we saw at SXSW, Approach’s set was the absolute cream of the crop.

The man is the ultimate party host, the captain of carousing, the sultan of soiree. He played the Midcoast Takeover stage at Shangri-La towards the end of the festival, and was joined by his right hand man DJ G-Train and master of the keys Nate Holt.

Midcoast Takeover played host to dozens of acts from Lawrence and Kansas City, so much of the audience knew each other. This also meant Approach, a familiar face throughout Lawrence venues, knew most of the audience as well (of course he did). So throughout his set, he addressed almost every person in the crowd by name, making the performance really felt like more of a family reunion than anything else.

Approach is so comfortable with his audience, he rarely sees the need to remain onstage. He divided his time between sitting on the edge of the stage, cracking jokes, dancing around, and physically interacting with people in the crowd. The real magic moment came during the “get down section of the program,” as he likes to call it. That’s when G Train jumps off stage and joins Approach for some jolly frolicking down below.

Approach generally likes to keep himself “in the moment.” So when his car broke down on the way to the festival, he rapped about it. Then he scaled a tree and rapped from there as well. He used every inch of the space at Shangri-La, both on and off the stage, to his advantage.

Several acts and hundreds of musicians blew through Midcoast Takeover, but one thing was clear to everyone: Approach was the Belle of the Ball.

SXSW through a photographer's lens