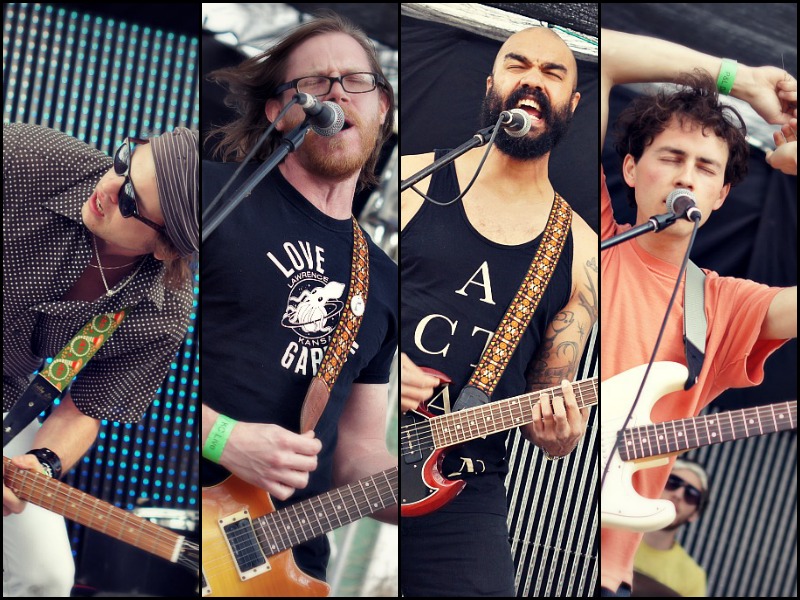 I Heart Local Music and Whatever Forever had the intense pleasure of introducing the SXSW music festival to some of the best, grittiest, and weirdest Lawrence has to offer. We threw a joint showcase, using the backdrop of the Midcoast Takeover event, to show off five (technically, six) acts from the Lawrence and Kansas City area. 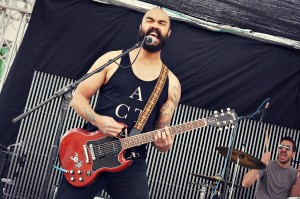 Black On Black gave a quiet and breezy afternoon a swift kick in the ass with their aggressive brand of raw rock and roll. The set was loud enough, you could hear it halfway down the next block. This drew a great crowd into what had been a vacant lot. If the frontman’s intimidating stage presence wasn’t enough to keep you locked in at the venue, the accelerating mania and momentum behind those powerful guitar chords and sharp bass lines did. 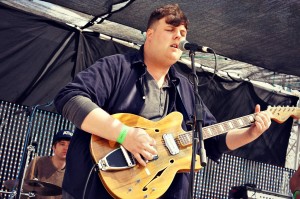 Shy Boys had some unfortunate luck at SXSW. After a series of unfortunate events, including a devastating accident that resulted in canceling one of their sets at the festival, this was their only SXSW appearance. So if you wanted to see Shy Boys, this was it… and it may have been the best set they ever played. Every note was spot on, and they came with just the right amount of strength and exertion.

With their vocals now crystal clear, you could really understand and feel every romantic, gut-wrenching, and heartbreaking lyric. That, paired with beautiful guitar riffs nestled into a breezy atmosphere, left us melting into a puddle. 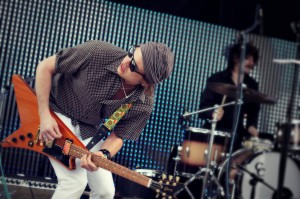 The Josh Berwanger Band had several sets scheduled throughout SXSW, and this may have been one of their best ones. By the time they took the stage, the band was in high spirits. Throughout the week, we saw several shy and secretive fans turn out for their shows, and on this day we noticed a few converts in the crowd as well.

They played rapid and rousing renditions of songs off of the recently released Strange Stains, and introduced a few new and unreleased tracks as well. The vitality of Josh Berwanger and his bandmates was through the roof, and it was reciprocated in their onstage banter in between every song. They constantly quipped with the audience and horsed around with each other onstage… and just when you felt like you were casually jesting with a friend, they’d plow into the next song and quickly remind you that you were at a rock show. 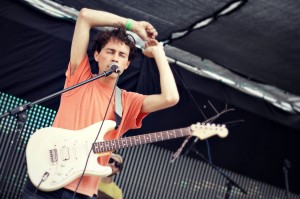 If there was ever a set to make you miss Lawrence, it was CS Luxem’s and Oils. Because the two acts are comprised of the same musicians, we scheduled them together in one set (to maximize the number of Lawrence acts we could bring to SXSW).

The first half of this tight time slot was dedicated to Oils. They filled the atmosphere with that Whatever Forever / SeedCo vibe so quickly, that any traces of feeling homesick were quickly thrown out the window and you found yourself exclaiming the band’s catch phrase “Let’s get weird!” Frontman Andrew Frederick noodled on the guitar intermittently while showcasing his unpredictable and drifting vocals, all while CS Luxem’s haunting voice lingered in the background. It left half the crowd in a trance, the other simply stupefied. 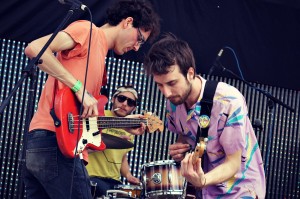 After fifteen minutes, they swapped roles and CS Luxem’s songs had a chance to shine. His mighty and robust vocals immediately had folks whipping their heads around. CS Luxem’s authoritative voice could bring a crowd to action, and on this day it did. When it was time to pay attention, they listened. When it was time to dance, they moved. And when it was over, they rushed to the merch table. CS Luxem’s sets are nothing short of majestic, and the bond between him and the musicians in his band left a particular sense of pride and passion in our hearts on this day. 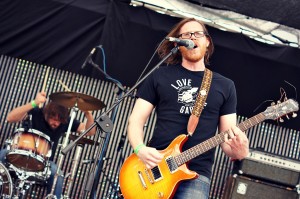 Nobody had a better time at SXSW than The Sluts. From the very moment they started playing, the goofy rock faces we normally see on the drummer took a back seat to the smiles he couldn’t stop displaying. In fact, both of them were all smiles as they graced what was most likely the biggest stage they’ve ever played.

We didn’t hear a single misstep in their set, and (as usual after their shows) they had some immediate (and intense) new fans. Because Midcoast Takeover is largely made up of Kansas City natives, there were some in the audience who recalled seeing them for the first time a year ago at the I Heart Local Music Showcase at Middle of the Map Fest. Friday’s SXSW set was the only opportunity they’d been given to see The Sluts in action again, and for that (we’re told) they were grateful.

That was the whole point of this event. Normally, we (happily) see these bands stuffed into the corner of the Replay every other weekend. But at this showcase, we saw them sprawled across a large stage, their name scrolling behind them in bright lights. These are the types of bands who don’t normally get asked to play festivals, but completely deserve to. It was fantastic and satisfactory to see the bands get the rock star treatment they deserve during a live set, and our guess is it’s a sign of bigger things to come.