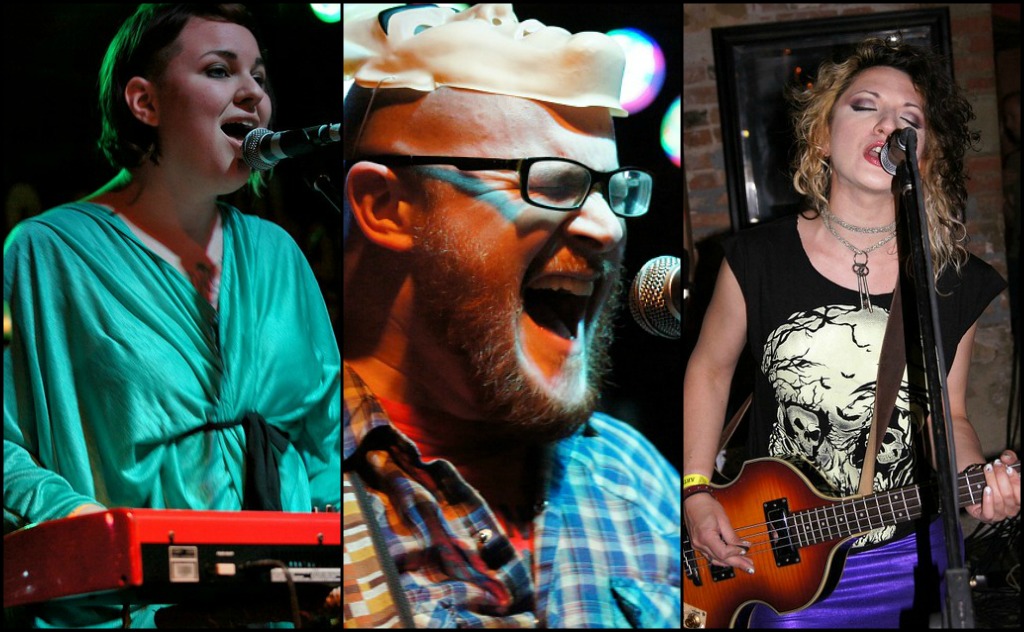 Middle of the Map fest began with a bit of monkey business on Friday evening thanks to the antics of Ad Astra Arkestra. The band is a three-ring circus onstage, and evokes a more puzzling and wildly thrilling response than the Flaming Lips.

Half the band donned masks (most of them monkey masks) during the set, while the rest bounced and flailed about the stage. On one side of the stage three gorgeous women dressed like naughty librarians huddled and bounced around a mic to provide backup vocals. On the other side of the stage, more monkeys sat perched atop a couple of drums.

The band isn’t all smoke and mirrors, their music is just as feverish and entertaining as their stage presence. Tribal chants, wicked guitar riffs, and drums galore could be heard all across the Beaumont. Festival organizers must have figured out that nothing gets a party started good and proper like an Ad Astra Arkestra set.

Capybara showed off months of hard work when they played several tracks off their latest release, Dave Drusky. The album gained critical acclaim, and fans filtered into the venue to catch the entrancing set.

Capybara’s set was a solid segway from the electrifying Ad Astra Arkestra set to the ever beautiful and melodic Cowboy Indian Bear.

Cowboy Indian Bear has to be one of the most fashionable bands in the area. The boys in the band have a love affair with shoes, and I find myself eagerly anticipating keyboardist Katlyn Conroy’s performance getups at each show. On Friday, she did not disappoint. Her legs were completely caked in gold sequins, while a green top flowed off the rest of her body.


The indie rock four-piece treated the audience to sensual and enchanting tunes. Guitarist Marty Hillard assured the concert-goers that they do enjoy rocking out, despite their easy-going songs. It didn’t take long for them to bust out several new songs from the upcoming album, much of which had that signature multi-drum danceyness embedded within.

The band always chatted with fans between songs, discussing just about anything (music they like, what they did that day, etc.). The always personable Cowboy Indian Bear thanked the fans, the community, and the folks who they say helped them get to where they are. That’s the thing about Cowboy Indian Bear; they’re always humble, always classic, and that kind of behavior is always in style.

Unicycle Loves You is a bizarre, spunky, and energetic (like crazy) band out of Chicago. The drummer provides beats at about a million miles a minute, and the comical stuntman and sassy bass player leave no shortage of entertainment.

Their music is terribly good fun, and begs you to cut a rug. I would send every sour puss I know to their live show, because it would surely leave them chipper with an extra bounce in their step.


There was plenty of thrashing to be had. The band is set to release a split album with sister band (and Kansas City based) The Wheelers. One of the band members from The Wheelers showed his allegiance to the band when he took his shirt off, sporting a “Soy Bomb” message on his belly, and thrashed all over the stage area for an entire song. It was ridiculously hilarious.
Tags:ad astra arkestra, capybara, concert, concert photography, cowboy indian bear, dave drusky, festival, i heart local music, kansas city, katlyn conroy, live, marty hillard, middle of the map, middle of the map fest, music festival, thrilling, unicycle loves you
Share:
Facebook0Tweet0LinkedIn0Pin0