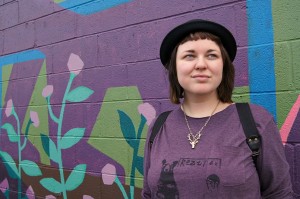 Come April, Katlyn Conroy is going to be one busy bee. 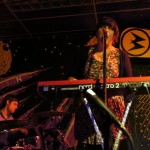 La Guerre at the Replay

Conroy will find herself in a number of projects leading up to the festival. She just returned from a tour with Cowboy Indian Bear, and she’s currently in the middle of recording new music as La Guerre. Sprinkle in a couple of music videos, and Conroy now has very little time on her hands. “I love experiencing every aspect of what I love,” says Conroy. “If there’s variety in it, it’s very exciting to me.”

Conroy’s hunger for all these projects has always been there, but it was last year’s inaugural Middle of the Map festival that brought that hunger to the forefront. “I was witnessing one of two members of Capybara playing. They had a Capybara show, they were the backing band for Daniel Johnston, they were just rushing around,” says Conroy. “I really envied them, I thought it was really cool. I thought that would be an exciting thing, to be running around playing with different bands, getting different experiences from shows.”

Don’t try and convince Conroy to take a break. The restless songwriter is knee-deep in recording new music for both La Guerre and Cowboy Indian Bear. Additionally, a life on the road leaves little time for anything else, and her next move has to be a calculated one. “I’ve always put music first, and I’ve always been really hungry,” says Conroy. “I’ve just never even considered the possibility of stopping, because this is my only option. It’s all I’ve ever wanted to do. I want it so badly.”

Conroy says she can’t envision any other goal other than continuing to keep music at the forefront of her life. She says even though she’s written several new songs with Cowboy Indian Bear, she’s still overflowing with new material. That’s where La Guerre comes in as a sweet release. “I just want to feel like I’m contributing to music, and that I’m not stopping no matter how bad things could potentially get,” says Conroy. “Everything is a learning experience, from being in Cowboy to Hospital Ships, to forcing myself out in front of a crowd and making myself perform. I always want to force myself out and make myself exposed in front of a crowd.”

See what Conroy exposes on April 6 and 7 at Middle of the Map Fest.

Enjoy this clip of Conroy performing with Cowboy Indian Bear at Middle of the Map fest last year. The performance left a crowd of about 1,000 silenced and in awe:

We also got the chance to record an adorable performance from Conroy in the park. Think of it as a cute little date with La Guerre: