The Replay was pretty packed and wound up for a Tuesday night, but a night of this much vicious rock warrants a thicker crowd. Hardcore rockers The Men were coming in from New York, and local hardcore royalty JabberJosh were also set to take the stage. 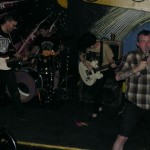 The ever so screamy Sick Bros, from Kansas City, were up first. The singer was a bit jazzed up (as proper punk rockers should be), at one point even (literally) diving into the crowd. Don’t worry, he asked permission to “leave the stage” first.

The band was a bit of an emotional roller coaster, with the singer sometimes curling up into a ball and yelling before performing a song called “The song to make the whole world shit.”

The set was no longer than 15 minutes. 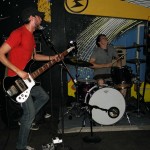 JabberJosh is quite possibly one of my favorite hardcore bands to watch. I love bands that do so much with so little, and this two-piece takes the cake and knocks you out. The band boasts one of the most intense and lively bass players in the area. His hands were constantly flying up and down the strings, and he’d stop in between screams to lean way back while he worked his magic on the fret.

These two are so in tune with each other, their musical rants fitting together like tight puzzle pieces. There was no need for loops or anything fancy. This was just solid, amazing rock. With a band this wicked, you couldn’t help but rock out with them.

Also enjoyable: their ridiculous song titles: “Your booty’s as big as my bank account which is technically not that big” and “Why the fuck would you reissue Frampton Comes Alive.” 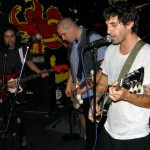 The Men look like a group of guys who could probably beat the tar out of you. They played hard (very hard), and by the end of the first song strings were broken and the crowd was headbanging.

The band shreds so hard, it’s exhausting just to watch them. My ears were already ringing two songs in. There is no doubt that these guys are hardcore. At one point the singer played guitar with a screwdriver instead of a pick. It was a most wonderfully wicked sound.

Here’s what they opened with:

I applaud anyone who soldiered through the sharp and shrill sounds that came out of the Replay on Tuesday night. We may have a few damaged eardrums, but the reward was well worth it.