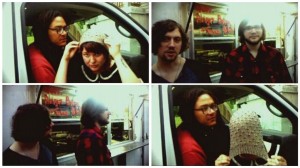 Get ready to see some local faces on Daytrotter. Cowboy Indian Bear is stopping by to record a session on Friday.

They’ll be making the stop at the studios for the award-winning site in the middle of their weekend of touring on the road. They’re set to play in Chicago on Thursday before playing in Iowa City on Friday. They’ll swing by St. Louis for a show on Saturday before heading back to Larryville.

The band will be changing it up just a bit at Daytrotter. The band says we may hear some old favorites, but not in the manner we’re used to. “We plan on playing about four songs, including a stripped down version of ‘Saline’ and at least one new song,” said Katlyn Conroy. “We are super excited about it.”