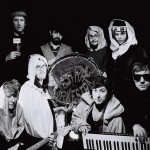 A couple of winters ago, I joined some friends on a trip to Johnson County Community College for what would end up being the most epic performance I would witness that year. Ad Astra Arkestra put on one hell of a show, and if you ever get a chance to see that kind of calamity, for the love of God GO.

I was a big Ad Astra Per Aspera fan back in the day. The band has since grown into the bizarre act they have today. You’ll still see the familiar faces in the band, as well as a few new ones. When I sat in the auditorium at JCCC, I wasn’t just treated to some of the area’s best musical talent. I was also treated to theatrics, a light show, stage antics and mind-blowing music. I couldn’t help but record the first song they performed, Reverse Fishing.

Here’s a much better version of the same performance. You may notice several notable Lawrence/KC musicians onstage: 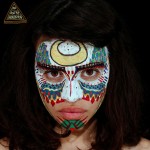 This week, the band released the nearly seven-minute song on SoundCloud. It’s paranoid, unhinged and epic. According to The Record Machine, the song is the first single off the self-titled 12″ set to come out this August. When that album comes out, run (don’t walk, RUN!) to Love Garden and snatch it up. The band is onto some alarmingly impressive stuff, and it may just leave you stupefied.

In the meantime, check out the new track here, and (if you’re like me) anxiously wait on pins and needles until they release some more.

Also, head down to the Replay on Friday, July 22, and show them some love (it’s an early patio show).